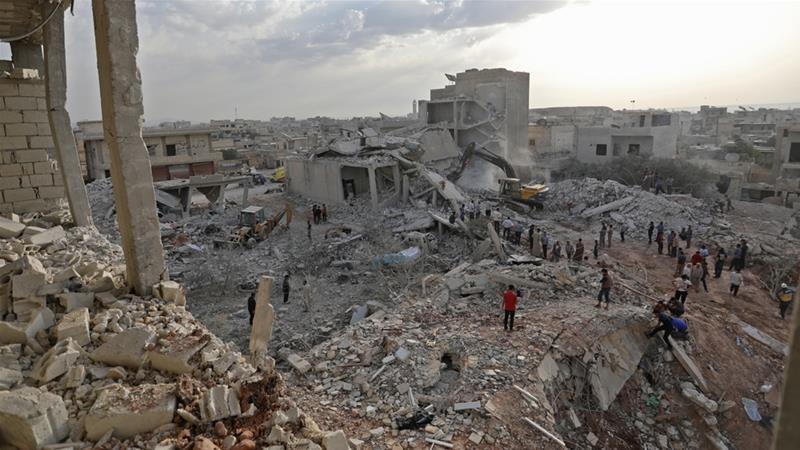 With the joint Syrian and Russian air campaign over Idlib province heating up over the past three weeks, and with the final showdown between Damascus and the last major al-Qaeda stronghold in Syria’s northwest imminent, President Trump on Sunday issued a stern warning directed at Syria, Russia, and Iran.

Trump tweeted that the three allies are “bombing the hell out of Idlib Province in Syria” and are in the process of “indiscriminately”killing civilians which he further called “butchery”. He ended the statement in all caps, saying “STOP!”.

Hearing word that Russia, Syria and, to a lesser extent, Iran, are bombing the hell out of Idlib Province in Syria, and indiscriminately killing many innocent civilians. The World is watching this butchery. What is the purpose, what will it get you? STOP!

The Kremlin was quick to respond, saying Monday militants from Idlib had stepped up attacks on civilian areas in places like nearby northern Hama as well as into Latakia province.

Blaming Turkey for failing to uphold the Astana ceasefire agreement by allowing its proxies to attack Syrian government areas, Kremlin spokesman Dmitry Peskov said “militants were using Idlib as a base to launch attacks against civilian and military” which he called “unacceptable,” according to Reuters.

“Of course strikes by militants from Idlib are unacceptable and measures are being taken to neutralize these strike positions,” Peskov told reporters.

Amid threats the US was prepared to launch another strike (following the April 2018 strikes for a claimed chemical attack in Idlib’s Khan Sheikhoun) if there was even so much as a claim of Syrian forces using chemical weapons, that prior September operation was called off as Russia and Turkey pursued a diplomatic route.

But here’s the huge significance of Trump’s latest tweet on Idlib: though it might be the case that’s it’s merely connected with the broader anti-Iran “maximum pressure” campaign, it remains that such statements are sure to get the immediate attention of the anti-Assad “rebels” — dominated in Idlib by Hayat Tahrir al-Sham (HTS, formerly AQ’s Nusrah Front).

The HTS militants understand very well that the White House has made past decisions on Syria based merely on optics.

President Donald Trump has said that the horrific images from a chemical weapons attack in Syria compelled him to authorize a missile strike against an Assad-regime airbase last week. But according to his son, Eric Trump, another key White House voice may have also influenced his decision to use military force.

According to an interview with The Daily Telegraph, Eric Trump said he is “sure” that his sister, and newly appointed West Wing adviser, Ivanka Trump, encouraged their father to carry out a the strike against the Syrian president.

The US fired 59 Tomahawk missiles at the Syrian airbase after more than 80 people were killed, including children, in a chemical weapons attack in Idlib province.

So ultimately, gory hospital scenes of suffering civilians and “nerve agent attacks” have in the past been enough to initiate US bombing and intervention against Assad without so much as an investigation of the claims.

No doubt the HTS/AQ jihadists who rule Idlib, with some three million civilians under their thumb in the northwest region, are even now preparing optics for some kind of “event” that will grab the attention of both international headlines and especially the White House. Likely the major “event” will come in form of a “well-timed” nerve agent attack.

It goes without saying that it runs entirely counter to Damascus and Russia’s own interests to use chemical weapons at this point while under an international microscope and scrutiny, especially as conventional bombs are readily available in their arsenals as they continue to pound Idlib.