THE OCCHIONERO FILES: An Italian-American Conspiracy to Overthrow President Trump THE OCCHIONERO FILES: An Italian-American Conspiracy to Overthrow President Trump

Italy’s Communist regime conspired against Trump and the American people

Today, I would like to let the American people know that the rumors that the firing of top Italian spies are related to Obama and a plot to set up President Trump in the Hillary email scandal are 100% true. I can only say this now because I am finally safe in the United States of America after Matteo Renzi and Giorgio Napolitano, who continuously tried to have me arrested in the last few years.  It was these two criminals that ruined my life, and the life of my poor wife, who suffered anxiety after my involvement in the so-called “pitchfork” movement in Italy in 2013:

This sordid tale began with the involvement of Italian intelligence and Giorgio Napolitano, who served as the 11th President of the Republic from 2006 to 2015, and was the only Italian President to be re-elected to the presidency, due to the fact that he is the illegitimate son of Umberto II, the last King of Italy. For this reason, critics often refer to him as Re Giorgio (“King George”).

However,  Napolitano, who is a close friend of Bill and Hillary Clinton, was a member of the Italian Communist Party. Even the progressive newspaper,  “The Guardian” that in recent years wrote many articles on the infamous Russiagate, and after his election in 2006 stated the following, “The Italian parliament today elected a former communist as president.” What people don’t know is that ex-president Giorgio Napolitano,  because of his bloodline, still controls Italian politics, even after he resigned in 2015.

In fact, former constitutional court judge and veteran center-left politician Sergio Mattarella, who took his place as Italian president, is only a modest Sicilian Mafia puppet in the hands of  “King George” who actively conspired against Donald J. Trump with ex-Prime Minister Matteo Renzi in 2016 under direct orders from his friend, Hillary Clinton. Renzi, who abused Italian intelligence for similar illegal activities is linked to the Clinton Foundation and is currently participating to the Bilderberg meeting in Montreux Switzerland.

There could be, however, other interesting developments on this story that the Italian media are keeping totally silent because it involves SpyGate, linked to the total failure of the Russiagate investigation. We all know how they attempted to frame a young Trump staff assistant, George Papadopoulos, through a fake “Russian spy,” called professor Mifisud, and both of these figures interestingly enough, revolved around the Link University in Rome, and contacts between the FBI and other foreign agencies, including the Italian ones that participated in a manipulative plot to sabotage President-elect Donald J. Trump.

All this is linked to the rather bizarre espionage story that surfaced in Italy two years ago regarding brother and sister, Giulio Occhionero (a Freemason of the Grand Orient of Italy), 45, and Francesca Maria Occhionero, 49. They were accused and arrested in January 2017 for illegally accessing classified information, and breaching and intercepting information technology systems and data communications. Thousands of emails which we all think are in the possession of the Italian Polizia Postale that actually originated from influential Italian figures like ex-PM Mario Monti,  Matteo Renzi, European Central Bank President Mario Draghi, various generals, cardinals, and even myself, were stored on servers located in the U.S. and later investigated by the FBI cyber division.  The two ended up on trial in Italy and were convicted and then released, but everything quickly disappeared from the news, without analysis or comment, despite the macroscopic entity of the alleged piracy activity.

Recently, Giulio Occhionero, who I have met in the past in Masonic lodges while in Italy, openly accused the Italian intelligence services of having acted against Trump. Members of Italian intelligence and former Italian Prime Minister Matteo Renzi were, in fact, approached by Hillary Clinton and the Obama Administration back in 2016 in order to frame Trump after his election by planting Hillary’s classified emails on the American servers of Occhionero to force Trump to step down from office. I would like to finally confirm what Giulio Occhionero has been saying about Obama and the former leader of Italy, Matteo Renzi conspiring against Trump, but I also want to add that the real puppet master of the entire operation that fortunately failed, was Communist elitist and former Italian president Giorgio Napolitano, an enemy of the American people.

I could not write this if I was still living in Communist-controlled Italy, where these people tried to poison me, arrest me and even locked me up in a mental asylum in true Soviet fashion, to silence me after the failed Pitchfork protests of 2013.

Earlier this month, Italian Prime Minister Giuseppe Conte asked for the resignations of several top intelligence officials after his call with President Donald Trump, but it is not enough because the rigged Italian political and economic system makes it impossible for the populist government of Conte and Salvini to control anything as the non-elected Italian president Sergio Matterella is still controlled by George Soros and Pope Francis, who would like to get rid of Donald J. Trump at all costs. For this reason, I will stay in the U.S. for the time being, as I fear for my life and the safety of my family.

Interestingly enough, the recent filings made by Giulio Occhionero with the Procura of Perugia were filed with Gemma Miliani, the same Public prosecutor that initially investigated the unjust defamation lawsuit against me in Italy by two known Freemasons connected to the infamous P2 Lodge, that are using this case to have me arrested in Italy after I accused them of illegal activities connected to Italian intelligence and the Vatican. 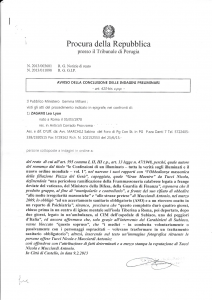 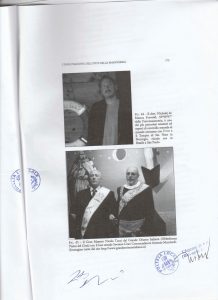 I’ve taken Occhionero’s filing that has been recently translated by neonrevolt.com using software and included them, side-by-side so you can also see the name of Gemma Miliani that seems to be a Masonic asset of some kind who Occhionero should not trust.