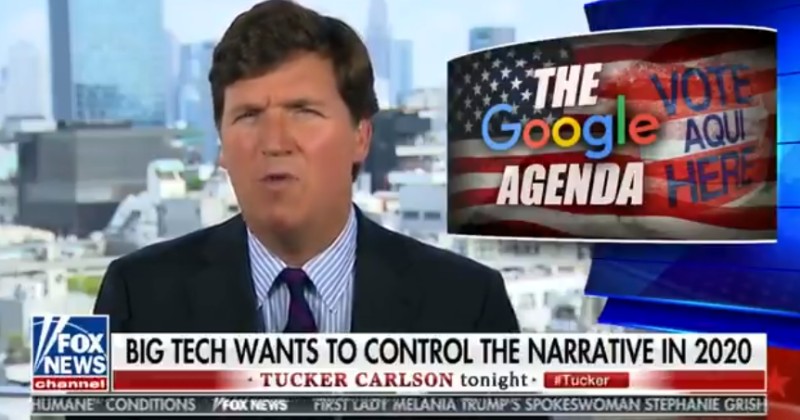 Tucker Carlson has slammed Republicans and the Trump administration for doing nothing to fight back against Big Tech censorship “while their ideas are suppressed and their supporters are silenced.”

Carlson explained how as soon as Trump took the White House in 2016, Big Tech began plotting to “control the election outcome in 2020” by “using the excuse of “fake news” to control the public discourse.

The Fox News host chastised the previous Republican Congress for failing to act, as well as the White House which refused to use its control of the “vast regulatory apparatus” to intervene.

“They’ve sat motionless and doing nothing,” Carlson said of the Trump administration.

Tucker praised Senator Josh Hawley, who recently introduced a bill that would strip Big Tech companies of their legal immunity as platforms under Section 230 of the Communications Act, as “the only Republican who seems interested at all in keeping Big Tech in check.”

Thanks @TuckerCarlson for highlighting our fight to hold Big Tech accountable pic.twitter.com/HbUKxuuJjO

“Passing Hawley’s bill doesn’t seem to be a priority though, no one in Congress is talking about it,” said Carlson, adding this was a “big mistake”.

“Successful political parties look out for their supporters….and protect them from harm,” said Carlson, slamming Republicans for “sitting in a stupefied fog of libertarianism doing nothing while their ideas are suppressed and their supporters are silenced.”

“One day they’ll look up and find they have no supporters at all – who will be to blame for that? Only themselves,” he concluded.

As we reported earlier, the latest example of Big Tech election meddling is Reddit quarantining of ‘The Donald’ – a hugely popular forum with over 700,000 members that was credited with being the “most effective” at spreading memes during the last presidential election.