We have a lying Neocon warmonger leading US into another catastrophic war! 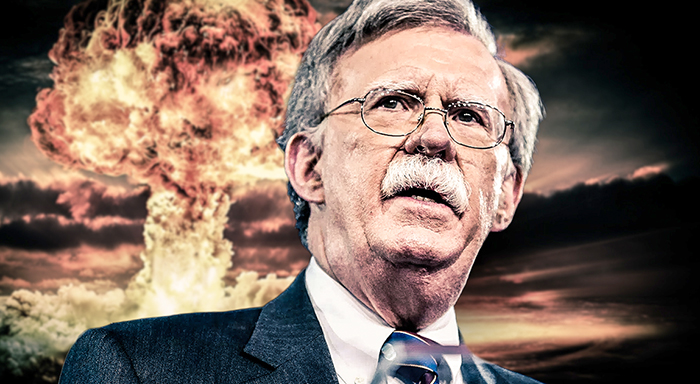 We have a lying Neocon warmonger leading US into another catastrophic war!

Journalist Whitney Webb recently tweeted a 2010 video clip I’d never seen before featuring US National Security Advisor John Bolton defending the use of deception in advancing military agendas, which highlights something we should all be paying attention to as Trump administration foreign policy becomes increasingly Boltonized.

On a December 2010 episode of Fox News’ Freedom Watch, Bolton and the show’s host Andrew Napolitano were debating about recent WikiLeaks publications, and naturally the subject of government secrecy came up.

“Now I want to make the case for secrecy in government when it comes to the conduct of national security affairs, and possibly for deception where that’s appropriate,” Bolton said. “You know Winston Churchill said during World War Two that in wartime truth is so important it should be surrounded by a bodyguard of lies.”

“Do you really believe that?” asked an incredulous Napolitano.

“You would lie in order to preserve the truth?”

“If I had to say something I knew was false to protect American national security, I would do it,” Bolton answered.

“I don’t think we’re often faced with that difficulty, but would I lie about where the D-Day invasion was going to take place to deceive the Germans, you’d better believe it,” Bolton continued.

“Why do people in the government think that the laws of society or the rules don’t apply to them?” Napolitano asked.

“Because they are not dealing in the civil society we live in under the Constitution,” Bolton replied. “They are dealing in the anarchic environment internationally where different rules apply.”

“But you took an oath to uphold the Constitution, and the Constitution mandates certain openness and certain fairness,” Napolitano protested. “You’re willing to do away with that in order to attain a temporary military goal?”

“I think as Justice Jackson said in a famous decision, the Constitution is not a suicide pact,”Bolton said.

So that’s a thing. And it’s important for us to know it’s a thing because of the way things are heating up in Iran right now, since Bolton’s fingerprints are all over it.

Bolton has long been calling for war with Iran and in a paid speech in July 2017 told his pro-regime change MEK terror cult audience that they would be celebrating the successful overthrow of the Iranian government together before 2019. Now we’re seeing threat alarms being elevated and fearmongering about Iranian missiles being circulated, with reports being leaked to the press of possible plans to send 120,000 US troops to the region.

This is an environment that is ripe for deceptions of all sorts, and, given what Bolton said on live television nearly a decade ago, we would all do very well to remain very, very skeptical of any and all news we hear about Iran going forward. If for example you hear that within this environment of escalated tensions and military posturing Iran or one of its “proxies” has attacked the United States in some way, your immediate response should be one of intense skepticism about what the mass media talking heads are telling you to believe.

Back in 2012 at a forum for the Washington Institute Of Near East Policy think tank, the group’s Director of Research Patrick Clawson openly talked about the possibility of using a false flag to provoke a war with Iran.

“I frankly think that crisis initiation is really tough, and it’s very hard for me to see how the United States president can get us to war with Iran,” Clawson began.

(Can I just pause here to note what a bizarre series of words that is? “Get us to war with Iran?” Get us to the thing that every sane human being wants to avoid with every fiber of their being? You want to “get us to” there? This is not the kind of thing normal humans say. You only hear this kind of insanity in the DC swamp where creatures like John Bolton have their roots.)

“So if, in fact, the Iranians aren’t going to compromise, it would be best if somebody else started the war,” Clawson continued. “One can combine other means of pressure with sanctions. I mentioned that explosion on August 17th. We could step up the pressure. I mean look people, Iranian submarines periodically go down. Some day, one of them might not come up. Who would know why? We can do a variety of things, if we wish to increase the pressure (I’m not advocating that) but I’m just suggesting that this is not an either/or proposition — just sanctions have to succeed or other things. We are in the game of using covert means against the Iranians. We could get nastier at that.”

“We Know Where Your Kids Live” John Bolton threatened head of chemical weapons commission as part of effort launch war against Iraq https://t.co/p8uluxbWGH

So these are ideas that have been in circulation for many years. That gun is loaded and ready to fire.

Bolton trussed up his 2010 confession using an example that most people would agree with: that it was reasonable for the Allied forces to deliberately deceive the Nazis about the nature of the D-Day invasion. But we know John Bolton better than that by now. This PNAC director and architect of the Iraq war once threatened to murder a foreign official’s children because his successful diplomatic efforts were putting a damper on the manufacturing of consent for the Iraq invasion. He wasn’t defending the use of deception in crucial military options used to halt tyrants trying to take over the world, he was defending the use of deception in the senseless wars of aggression that he has built his political career on advancing.

Take everything you hear about Iran with a planet-sized grain of salt, dear reader, and everything you hear about Venezuela too while we’re on the subject. There are skillful manipulators who are hell bent on toppling the governments of those nations, and they have absolutely no problem whatsoever with deceiving you in order to facilitate that. And they don’t believe the rules apply to them.