The Spontaneous “Military Coup” in Caracas was Meant to Fail? Guaido gestures as he speaks to supporters during a rally against Maduro’s government and to commemorate May Day in Caracas on Wednesday. (Carlos Garcia Rawlins/Reuters)

The Spontaneous “Military Coup” in Caracas was Meant to Fail?

Comparison with the Failed June 29, 1973 Coup which preceded the September 11, 1973 military coup against Salvador Allende 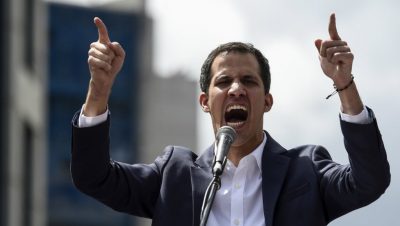 Was it really a military coup?

Anybody who has lived in Caracas, knows that you cannot wage a spontaneous military coup starting up in Chacaito, an upper middle class residential area, with a view to eventually marching towards the Miraflores presidential palace located in the historical centre of Caracas, without getting caught in dense traffic.

There are important historical precedents of failed coups caught up in traffic.

Guaido presents the operation as the “Final phase” of “Operation Freedom.” ???

Lopez and Guaido released videos on social media, calling on the armed forces to back their efforts and urging supporters to take to the streets, in what they termed as the “final phase” of the so-called “Operation Freedom.” Large crowds of anti-government protesters, as well as opposition lawmakers, made their way to the Altamira overpass. (Venezuela Analysis, May 1, 2019)

The government responded by sending in the riot police, with the Armed Forces using tear gas against the protesters.

This spontaneous so-called military putsch was meant to fail.

Visibly, it was not a carefully planned operation. And Washington was fully aware from the outset that it would fail.  In fact it was carefully staged “not to succeed”:

The scene then saw armed confrontations between the soldiers that backed Juan Guaido and those inside La Carlota airbase.

[Carlota is not a full-fledged military base, it is a former private airport, largely defunct. It is now under the jurisdiction of the State of Miranda, used for both military and civilian emergencies]

According to witnesses in La Carlota [air base], the Venezuelan armed forces fired tear gas towards the Altamira overpass, where civilian protesters began to gather, whereas Guaido’s soldiers returned live fire. Riot police also appeared on the scene to try and disperse the crowds. There are reports of protesters wounded and arrested that are unconfirmed at the time of writing.

At the same time, many of the originally deployed soldiers withdrew from the scene, later revealing that they had been “deceived” by their superiors. Simultaneously, Chavista leaders took to state and social media to denounce what they termed a coup in progress, and large crowds gathered to defend Miraflores Presidential Palace.

Guaido later attempted to lead a march, including some armed soldiers, into western Caracas but was stopped by Venezuelan National Guard forces in Chacaito, some 10 kilometers away from Miraflores.(Venezuela Analysis, May 1, 2019)

From Washington’s standpoint, the ‘putsch” nonetheless served a “useful” purpose. It created a “narrative”, which serves as propaganda and media disinformation.  In turn, the Western media goes into high gear.

The “coup” becomes a talking point for the Bolton -Pompeo national security team. It becomes a pretext and a justification for US military intervention in the name of Democracy at some future date. See Pompeo below 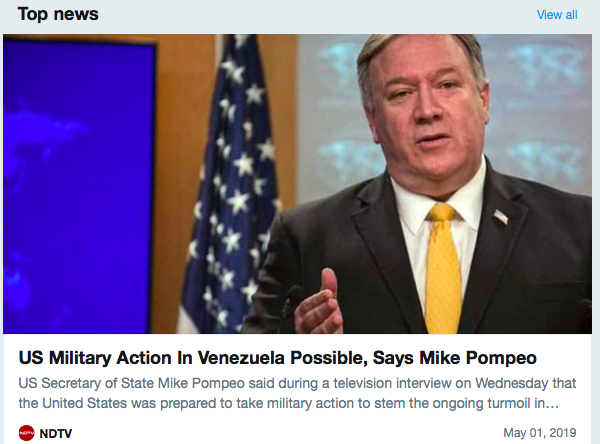 The Planning of a Coup against Venezuela: Chile, September 11, 1973: The Ingredients of a Military Coup. The Imposition of a Neoliberal Agenda 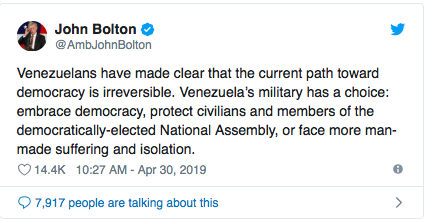 Mild thunder before the storm? It sets the stage? What is the intended timeline?

A failed putsch which may be followed by a “real” US sponsored military coup at some later date? That option is already on the drawing-board of the Pentagon.

Was this event planned to fail from the very outset?

In Chile in 1973, the September 11 coup d’Etat which led to the assassination of Allende and the installation of a military government was a carefully prepared military-intelligence operation supported by the US. with Henry Kissinger playing a key role.

Of historical significance: The September 11, 1973 coup was preceded by a failed coup on June 29, 1973 , which, in retrospect, was intended to fail.

In 1973, I was visiting professor at the Catholic University of Chile. The following text is an excerpt from an article I wrote in Santiago de Chile in the immediate wake of September 11, 1973 military coup against the democratically elected government of president Salvador Allende.

Bear in mind: The circumstances of  Chile in 1973 as well as the command structure of the (Chilean) Armed Forces were very different to those of Venezuela in 2019.

In the course of the months of July-August 1973, following the June 29, 1973 failed coup, important shifts occurred within Chile’s Armed Forces.In turn, the Christian Democrats were pressuring Allende to bring the military into the government.

On June 29, 1973, Coronal Roberto Souper led his tank division in an isolated attack on La Moneda, the Presidential Palace, in the hope that other units of the armed forces would join in. The June coup had initially been planned for the morning of September 27 by Patria y Libertad as well as by several high ranking military officers. The plans were found out by Military Intelligence and the coup was called off at 6pm on the 26th. A warrant for the arrest of Coronal Souper had been issued. Confronted with knowledge of his impending arrest, Colonel Souper in consultation with the officers under his command, decided to act in a most improvised fashion. At 9 am, amidst morning rush hour traffic, Tank Division Number Two drove down Bernardo O’Higgins, Santiago’s main down-town avenue towards the Presidential Palace.

While the aborted June Coup had the appearance of an insolated and uncoordinated initiative, there was evidence of considerable support in various sectors of the Navy as well as from Air Force General Gustovo Leigh, now [September 1973] member of the military junta [on 11 September General Leigh integrated the military Junta headed by General Pinochet]. According to well-informed sources, several high ranking officers in the aero-naval base of Quintero near Valparaiso had proposed the bombing of State enterprises controlled by militant left wing groups, as well as the setting up of an air corridor to transport navy troops. The latter were slated to join up with the forces of Colonel Souper in Santiago.

The June trial coup was «useful» indicating to the seditious elements within the Chilean Armed Forces that an isolated and uncoordinated effort would fail. After June 29, the right-wing elements in the Navy and the Air Force were involved in a process of consolidation aimed at gaining political support among officers and sub-officers. The Army, however, was still under the control of Commander in Chief General Carols Prats, who had previously integrated Allende’s cabinet and who was a firm supporter of constitutional government.

Meanwhile in the political arena, the Christian Democrats were pressuring Allende to bring in members of the Military into the Cabinet as well as significantly revise the programme and platform of the Unidad Popular. Party leaders of the government coalition considered this alternative [proposed by the Christian democrats] as a « legalized military coup» (golpe legal) and advised Allende to turn it down. Carlos Altamirano, leader of the Socialist Party had demanded that an endorsement of the programme of the Popular Unity coalition by the military be a sina qua non condition for their entry into the Cabinet. Upon the impossibility of bringing in the Military into the Cabinet on acceptable terms, Allende envisaged the formation of a so-called “Cabinet of Consolidation” composed of well known personalities. Fernando Castillo, rector of the Catholic University and a member of the Christian Democratic Party, Felipe Herrera, President of the Inter-|American Development Bank and other prominent personalities were approached but declined. (Michel Chossudovsky, The Ingredients of a Military Coup, Universidad Catolica de Chile, Santiago, September 1973)