Really, would you trust this obvious Javanka scheme to acquire all the names of Alt Media folks who have been censored?!?! 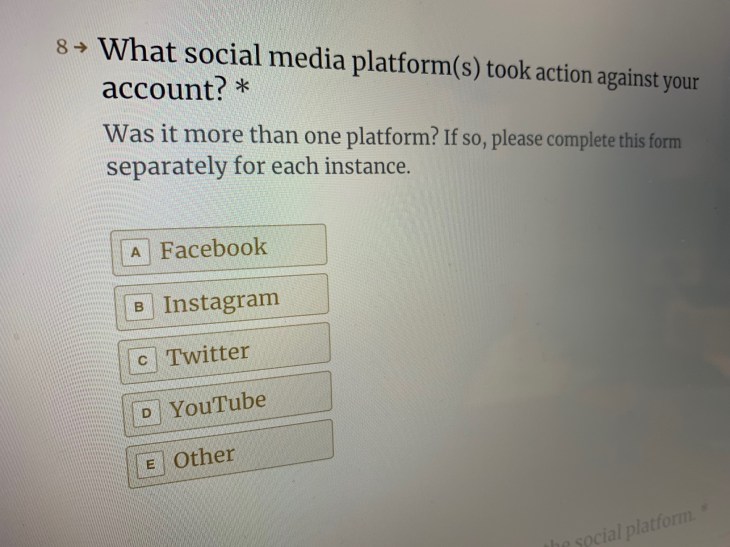 Really, would you trust this obvious Javanka scheme to acquire all the names of Alt Media folks who have been censored?!?!

It’s no secret that the Trump administration has been at war with social media. In the past year, the president has accused several online giants of censoring conservative voices, in particular giants like Twitter, Google and Facebook.

The Trump Administration is fighting for free speech online.

No matter your views, if you suspect political bias has caused you to be censored or silenced online, we want to hear about it! https://t.co/9lc0cqUhuf pic.twitter.com/J8ICbx42dz

“SOCIAL MEDIA PLATFORMS should advance FREEDOM OF SPEECH,” the minimalistic site reads. “Yet too many Americans have seen their accounts suspended, banned, or fraudulently reported for unclear ‘violations’ of user policies.”

For those who feel they’ve been wronged in some way by one of the major platforms, the 16-part questionnaire lets you choose from a list including Facebook, Instagram, Twitter and YouTube, while inquiring about specific tweets that were censored or accounts that were targeted. Users can submit screenshots and other supporting evidence and opt in for “President Trump’s fight for free speech” after entering a name, email address, phone number and proving they’re real by answering a trivia question about the Declaration of Independence (take that, robots).

Twitter “SHADOW BANNING” prominent Republicans. Not good. We will look into this discriminatory and illegal practice at once! Many complaints.

Trump has made “shadow banning” and other perceived slights against conservative voices a key cause in recent months. Last summer, he took to Twitter to address issues with the platform, writing, “Twitter ‘SHADOW BANNING’ prominent Republicans. Not good. We will look into this discriminatory and illegal practice at once! Many complaints.”

Late last month, the president met with Jack Dorsey for 30 minutes in the Oval Office, to discuss making Twitter “healthier and more civil,”according to the tech exec. No word on what the White House plans to do with the evidence it compiles.