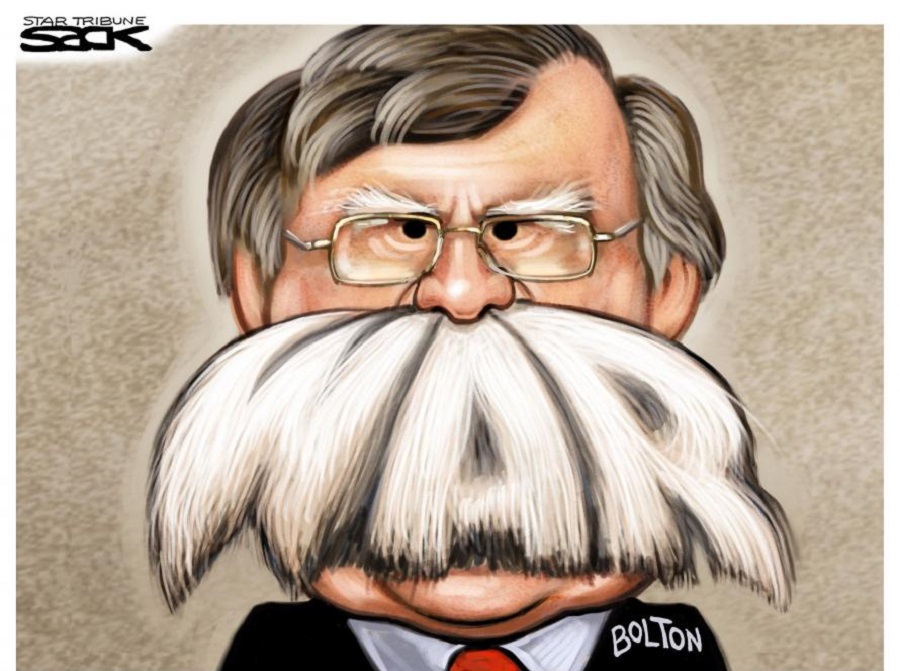 The scare mongering about an attack on Iran continues. Bolton must be laughing his ass off how easy he can play the issue based on nothing. He simply counters any debunking of the alleged ‘thread from Iran’ by upping the ante. Yesterday a British general in Iraq denied that any such threat exists in the area of his responsibility:

“No – there’s been no increased threat from Iranian-backed forces in Iraq and Syria,” Maj. Gen. Christopher Ghika, deputy commander of Operation Inherent Resolve (OIR), the coalition responsible for counter-terrorist operations against ISIS in Iraq and Syria, said in a video briefing, according to the Guardian.

Today Bolton countered that by again raising the noise level around the imaginary threat:

The U.S. Embassy in Iraq says the State Department has ordered all non-essential, non-emergency government staff to leave the country right away amid escalating tensions with Iran.The alert, published on the embassy’s website on Wednesday, comes after Washington last week said it had detected new and urgent threats from Iran and its proxy forces in the region targeting Americans and American interests.

Bolton is for now achieving the results he wants. He systematically fills the public space with talk about the non-existing ‘threat from Iran’. If that threat is established in the public mind by its constant repetition, it will be used for the usual false flag incident to justify to launch a war on Iran.

Bolton’s power might change though. The knifes are out against him and there are rumors that he might get fired:

Two sources familiar with the matter tell me President Donald Trump’s rumbustious National Security Council chief is headed for the exits, having flown too close to the sun on his regime change efforts for Iran, Venezuela and North Korea. “Hearing that Trump wants him out,” a former senior administration official told me.

Bolton (and maybe Trump too) want a war on Iran because Bibi Netanyahoo asked for one, because the anti-Iranian MEK cult and Zionists paid him to wage one, and because he thinks he can do so without damaging the United States. 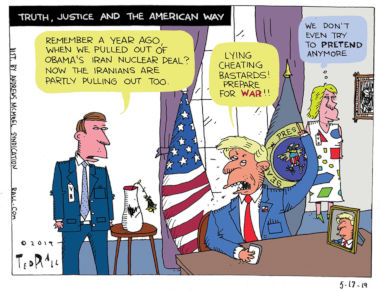 by Ted Rall (used with permission) – bigger
It is the last point where he is completely wrong. The war on Iraq destroyed the position of the U.S. as the ‘sole superpower’. Russia used the aftermath to come back into the Middle East while China gained time to fortify its position in Asia. The once sole superpower is now only a primus inter pares with China and Russia. A U.S. war on Iran would further diminish its position. China and Russia would both end up with an increased standing in the world while the U.S. would lose out.

Yesterday the New York Times promoted the options the Pentagon gave to the White House for a war on Iran. It led with the 120,000 troops option which made no sense:

Newsweek now says that the 120,000 troop option is only the prelude for an invasion of Iran:

Pentagon officials told Newsweek that if deployed, the role of the 120,000 U.S. forces would center on logistical support and developing infrastructure to preposition U.S. forces for the option of a ground invasion. The original 120,000 would integrate into an additional surge of U.S. forces sent into the region.

These “Pentagon officials” are not “military officials”, i.e. not soldiers. They seem to have no idea what they are speaking about. An invasion and occupation of the mountainous Iran would require over half a million soldiers just for the start. Even an invasion of only the oil rich areas on Iran’s west coast and on its border with Iraq would require a force of some 300,000 men. Without a draft the U.S. military is unable to sustain such a large operation for more than two or three months.

And invade from where please? Iraq would certainly not allow U.S. forces to attack its neighbor from its grounds. An invasion by sea is prohibited by the confined water of the Persian Gulf, the lack of minesweepers, and of other maritime assets.

The people who talk up such a war have a serious case of delusion:

A Pentagon source told Newsweek if anything is likely to happen involving the preliminary Iran options, it would involve a heavy guided missile strike campaign in an attempt to lead Tehran to the negotiation table with Washington.”It depends on the escalation of force. But no matter the bravado from Iran’s side, when you get hit it with 500 missiles every day, it degrades you, which is the objective. When your opponent is weak, you get more out of any negotiation,” said one official with knowledge of the Iran plans.

Once upon a time one Saddam Hussein, egged on by the U.S. and Arab Gulf dictators, had similar ideas. When he attacked Iran in 1980 he thought that he could seize Iran’s oil-rich Khuzestan Province within a month or two. After the 1979 Islamic revolution the Iranian military was in disarray. Many officers had been dismissed or had left. Iran was under a global weapon embargo while Iraq had support from all large powers. The war did not take too month. It took eight years, the use of chemical weapons against Iranian cities, a large U.S. operation against the Iranian navy, and over a million death on both sides before Iran was willing to accept a ceasefire. In the end the border was restored to its prewar state. Iraq nearly went bankrupt due to the war which is the reason why it later seized Kuwait and had to endure the consequences.

In light of that history it is hilarious to believe that one would “get more out of negotiations” with Iran by each day launching 500 missiles at it.

And what about Iran’s retaliation capabilities? Iran has a large missile force and drone fleet of its own. It has well equipped proxy force in Lebanon and elsewhere. Each cruise missile hit on Tehran can and will be countered by one on Tel Aviv. Iran would also have support from China and from Russia which can provide all kind of weapons it needs through the Caspian Sea, while the U.S. would lack capable allies.

Iran’s missiles can hit any country in the Middle East that hosts U.S. forces. It can target Saudi desalination plants, UAE refineries and various oil shipping ports. Energy prices would go through the roof. The recent incidents near the UAE port Fujairah and the attack on the Saudi east-west pipelines were likely not caused by Iran. But they give a minor taste of what Iran’s asymmetric capabilities could achieve.

The ‘Pentagon officials’ should reread their briefings on the Millennium Challenge exercise which simulated a U.S. (blue) attack on Iran (red):

At the start of MC ’02, to fulfill the forced-entry requirement, blue issued red an eight-point ultimatum, of which the final point was surrender. Red team leader Van Riper knew his country’s political leadership could not accept this, which he believed would lead the blue forces to directly intervene. Since the George W. Bush administration had recently announced the “preemption doctrine,” Van Riper decided that as soon as a U.S. Navy carrier battle group steamed into the Gulf, he would “preempt the preemptors” and strike first. Once U.S. forces were within range, Van Riper’s forces unleashed a barrage of missiles from ground-based launchers, commercial ships, and planes flying low and without radio communications to reduce their radar signature. Simultaneously, swarms of speedboats loaded with explosives launched kamikaze attacks. The carrier battle group’s Aegis radar system — which tracks and attempts to intercept incoming missiles — was quickly overwhelmed, and 19 U.S. ships were sunk, including the carrier, several cruisers, and five amphibious ships. “The whole thing was over in five, maybe ten minutes,” Van Riper said.

The war hawks’ inability to learn from history is quite remarkable:

Firing Line with Margaret Hoover – @FiringLineShow- 20:14 utc – 14 May 2019Senator @TomCottonAR tells Firing Line if it comes to war with Iran, he is confident the United States would win, and would win swiftly. “Two strikes, the first strike and the last strike,” says the Senator. (video)

We have heard such talk before:

“The idea that it’s going to be a long, long, long battle of some kind I think is belied by the fact of what happened in 1990. Five days or five weeks or five months, but it certainly isn’t going to last any longer than that.”
Donald Rumsfeld, November 15 2002, CBSNews

The war on Iraq would be a short simple affair, said the Tom Cotton like nutters. It was also said to cost next to nothing. Sixteen years later, after a million dead, $2 trillion spent and after enduring a huge economic crisis, the U.S. is still fighting in Iraq.

There are no short or cheap wars. War is by its very nature unpredictable, costly, and hardly ever ends as desired.

John Bolton has long argued for a war on Iran. Should he get his will and push the U.S. into launching a war, both sides of it will lose out. There will also be a lot of collateral damages in several other countries in the Middle East, and other severe consequences we can not yet foresee.

What is assured though is that the biggest winners of such a war, and maybe the sole ones, will be Russia and China.

The Democratic opposition in the U.S. seems to have little time to argue against another war in the Middle East. It is still busy subpoenaing the remnants of the Russiagate investigations. But isn’t it evident that Putin is -right now- using the infamous pee-tape to push Trump into a war on Iran from which Russia’s standing in the world will profit? What are they doing to prevent that?