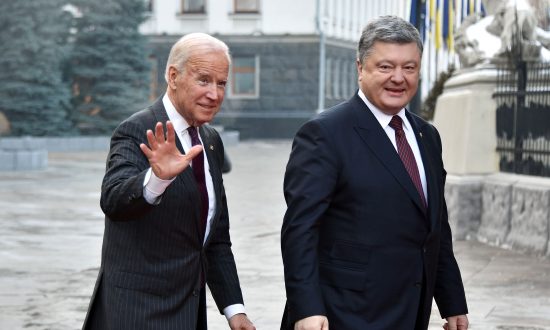 It looks like Joe Biden isn’t the chosen one after all.

After getting that whole ‘groping’ thing out of the way and announcing his 2020 bid for the White House, Biden emerged as the Democratic frontrunner this week according to several polls.

Alas for Biden, his past is catching up with him, again.

While Politico and Marketwatch have dinged Biden over free-trade fails and comments on China, perhaps most damning is a late Wednesday article in the New York Times slamming the former vice president’s major Ukraine conflicts. We reported on this nearly four weeks ago following reporting and interviews with key players by The Hill‘s John Solomon, and it looks bad for Joe.

At the heart of the matter is Biden’s role in threatening Ukraine if they didn’t immediately fire their top prosecutor, General Viktor Shokin – who was leading a wide-ranging corruption investigation into a natural gas firm – Burisma Holdings – which Biden’s son, Hunter, sat on the board of directors.

Biden openly bragged about this at a January CFR event.

In his own words, with video cameras rolling, Biden described how he threatened Ukrainian President Petro Poroshenko in March 2016 that the Obama administration would pull $1 billion in U.S. loan guarantees, sending the former Soviet republic toward insolvency, if it didn’t immediately fire Prosecutor General Viktor Shokin. –The Hill

Biden’s campaign maintains that the former vice president carried out US policy without regard to Hunter’s activities, and that the two never discussed the matter. Biden claims he found out his son was on the board of Burisma “from news reports.” Incredible.

It goes much deeper though…

As the Times notes, “new details about Hunter Biden’s involvement, and a decision this year by the current Ukrainian prosecutor general to reverse himself and reopen an investigation into Burisma, have pushed the issue back into the spotlight.”

Hunter Biden was a Yale-educated lawyer who had served on the boards of Amtrak and a number of nonprofit organizations and think tanks, but lacked any experience in Ukraineand just months earlier had been discharged from the Navy Reserve after testing positive for cocaine. He would be paid as much as $50,000 per month in some months for his work for the company, Burisma Holdings. –New York Times

HUNTER BIDEN's partners recruited firms to diffuse Ukrainian investigations into an oligarch whose company was paying Hunter Biden $50k/month.
The cases were closed in 2017, but now they've been reopened.@JoeBiden's campaign says it's a political attack. https://t.co/tblUPYPJMG

In fact, the Obama State Department at the time were concerned that Hunter Biden’s work for Burisma would pose a conflict for his father’s diplomatic efforts, according to the report which cites former officials.

“I have had no role whatsoever in relation to any investigation of Burisma, or any of its officers,” said Hunter Biden in a Wednesday statement. “I explicitly limited my role to focus on corporate governance best practices to facilitate Burisma’s desire to expand globally.”

Republicans, meanwhile, have seized – pounced if you will – on the Bidens’ Ukraine conflicts. Leading the charge has been Trump’s personal attorney, Rudy Giuliani, who last week told Fox News “I ask you to keep your eye on Ukraine.”

Mr. Giuliani declined to comment on any such phone call with Mr. Trump, but acknowledged that he has discussed the matter with the president on multiple occasions. Mr. Trump, in turn, recently suggested he would like Attorney General William P. Barr to look into the material gathered by the Ukrainian prosecutors — echoing repeated calls from Mr. Giuliani for the Justice Department to investigate the Bidens’ Ukrainian work and other connections between Ukraine and the United States.

Mr. Giuliani said he got involved because he was seeking to counter the Mueller investigation with evidence that Democrats conspired with sympathetic Ukrainians to help initiate what became the special counsel’s inquiry. –New York Times

“I can assure you this all started with an allegation about possible Ukrainian involvement in the investigation of Russian meddling, and not Biden,” said Giuliani. “The Biden piece is collateral to the bigger story, but must still be investigated, but without the prejudgments that infected the collusion story.”

For 5 years, HUNTER BIDEN was on the board of a gas company owned by a Ukrainian oligarch accused of enriching himself using his position in the Russia-aligned YANUKOVYCH gov't.
BIDEN stepped down last month, as his dad was preparing to run for president. https://t.co/tblUPYPJMG

The decision to reopen the Burisma investigation was made in March by Ukraine’s current prosecutor general – who had previously cleared Hunter Biden’s employer over two years ago. The announcement was made following a contentious presidential election, and was seen in some quarters as a bid by the prosecutor general, Yuriy Lutsenko, to curry favor from the Trump administration on behalf of his boss – incumbent president Petro O. Poroshenko.

Poroshenko lost his re-election bid last month to a comedian who played a president on TV, Volodymyr Zelensky – who says he will replace Lutsenko as prosecutor general. Zelensdky has not indicated whether Lutsenko’s replacement will be asked to continue the investigation.

Kostiantyn H. Kulyk, a deputy for Mr. Lutsenko who was handling the cases before being reassigned last month, told The New York Times that he was scrutinizing millions of dollars of payments from Burisma to the firm that paid Hunter Biden.

Hunter Biden’s work in Ukraine appears to have been well compensated. Burisma paid $3.4 million to a company called Rosemont Seneca Bohai LLC from mid-April 2014, when Hunter Biden and Mr. Archer joined the board, to late 2015, according to the financial data provided by the Ukrainian deputy prosecutor. The payments continued after that, according to people familiar with the arrangement.

Rosemont Seneca Bohai was controlled by Mr. Archer, who left Burisma’s board after he was charged in connection with a scheme to defraud pension funds and an Indian tribe of tens of millions of dollars. Bank records submitted in that case — which resulted in a conviction for Mr. Archer that was overturned in November — show that Rosemont Seneca Bohai made regular payments to Mr. Biden that totaled as much as $50,000 in some months. –New York Times