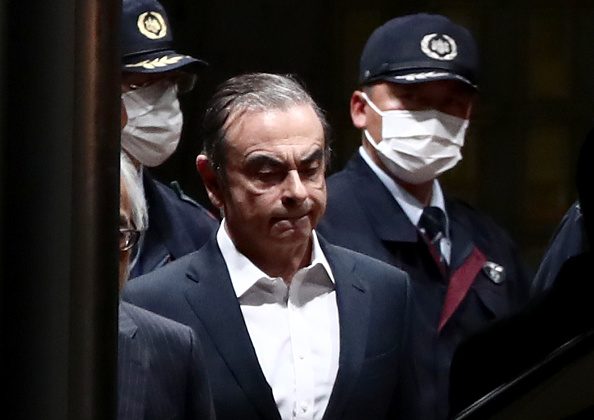 Former Nissan Chairman Carlos Ghosn (C) is escorted as he walks out of the Tokyo Detention House following his release on bail in Tokyo on April 25, 2019. BEHROUZ MEHRI/AFP/Getty Images

Ghosn Freed on Bail Again After Being Jailed on New Charges

Carlos Ghosn walked out of a Tokyo detention center after winning release on bail for the second time, giving the deposed auto titan a chance to prepare his defense against charges of funneling millions of dollars from Nissan Motor Co. through an intermediary for his own purposes.

A court set Ghosn’s 500 million yen ($4.5 million) bond earlier on April 25 with three conditions: that he live at a registered domestic address, that he not leave the country, and that he adhere to requirements meant to prevent the destruction of any evidence related to the case and other conditions. He’s also not allowed to see his wife, Carole, without court approval, his lawyers said.

Ghosn was freed late April 25 after prosecutors’ last-ditch appeal of his release was rejected by the Tokyo district court. Dressed in a dark suit, white shirt, and no tie, he left the facility with one of his lawyers, Takashi Takano, at around 10:20 p.m. local time. They stepped into black Toyota van and drove off.

In a statement issued after his release, Ghosn reasserted his innocence and said he’ll “vigorously” defend himself. He also criticized his treatment by Japanese authorities and the conditions placed on his wife.

“No person should ever be indefinitely held in solitary confinement for the purpose of being forced into making a confession,” Ghosn said. “But restricting communications and contact between my wife and me is cruel and unnecessary. We love each other very much, she answered all of the prosecutors’ questions in court, and she has done nothing wrong.”

Unlike the last time he was released, Ghosn wore no disguise. The first time he left jail, his lawyers disguised the former auto executive as a construction worker, which briefly became a sensational story of its own. Ghosn was detained for a second time on April 4, cutting short almost a month of freedom after previously paying $9 million in bail. Authorities said they detained him again because they believed he might destroy evidence in a case stretching back to his first arrest in November. Ghosn has proclaimed his innocence on all charges.

Including the latest three-week stint, this means Ghosn has been detained for about 130 days since his arrest in November just after the private jet he was on landed at Tokyo’s Haneda airport.

“The only justification for keeping him in detention are that he will flee or destroy evidence,” Stephen Givens, a professor of law at Sophia University in Tokyo, said before Ghosn’s latest bail decision. “After the first two indictments, he was able to put together a set of conditions that told the court he wasn’t likely to flee.”

The latest indictment against Ghosn was filed April 22. Using foreign corporate entities in 2017 and 2018, Nissan lost $5 million that was funneled into accounts controlled by Ghosn, prosecutors said. Those constitute the most serious allegations yet against the former chairman, who once led the global alliance between Nissan, Renault SA and Mitsubishi Motors Corp.

The pending release will allow Ghosn to return home and work with his lawyers for his upcoming trial, which may start later this year or next year. Ghosn refuted the latest charges, saying prosecutors were “aided and abetted by certain Nissan conspirators.”

Nissan reissued the same statement it made during previous developments in the Ghosn case, saying it cannot comment on judicial decisions or processes but that its own investigation found “substantial evidence of blatantly unethical conduct” by Ghosn and former right-hand-man Greg Kelly, who remains free on bail after being arrested along with Ghosn in November.

After Ghosn’s first arrest, Nissan and Renault uncovered payments made through companies in Oman and Lebanon that allegedly were used for Ghosn’s personal benefit, including a yacht and his son’s startup. One company, Beirut-based Good Faith Investments, made money transfers to a firm connected to Anthony Ghosn, people familiar with the matter said.

Ghosn’s first arrest shook the auto alliance to its core. Since then, the three companies adopted a new governance structure designed for smoother and more equitable decision-making.

Nissan, which swiftly removed Ghosn as chairman days after his first arrest, is seeking to move past the tumultuous chapter. The Yokohama-based automaker is on track to miss its full-year profit goal, earning less than partner Renault for the first time in a decade.

The Japanese carmaker on April 24 slashed its preliminary operating profit for the second time to 318 billion yen for the year ended March, from 450 billion yen. It cited higher costs related to U.S. warranties, an “adverse operating environment” and the “impact of recent corporate issues on sales.”

Before his latest arrest, Ghosn recorded a video in which he argued that Nissan executives either signed off on his actions or were conspiring against him because they feared losing their jobs if the company moved closer to Renault. He also criticized current executives for not fixing the company’s poor performance.

“I’m worried because obviously the performance of Nissan is declining, but also I’m worried because I don’t think there is any vision for the alliance being built,” Ghosn said in the video, which was released after his latest arrest.