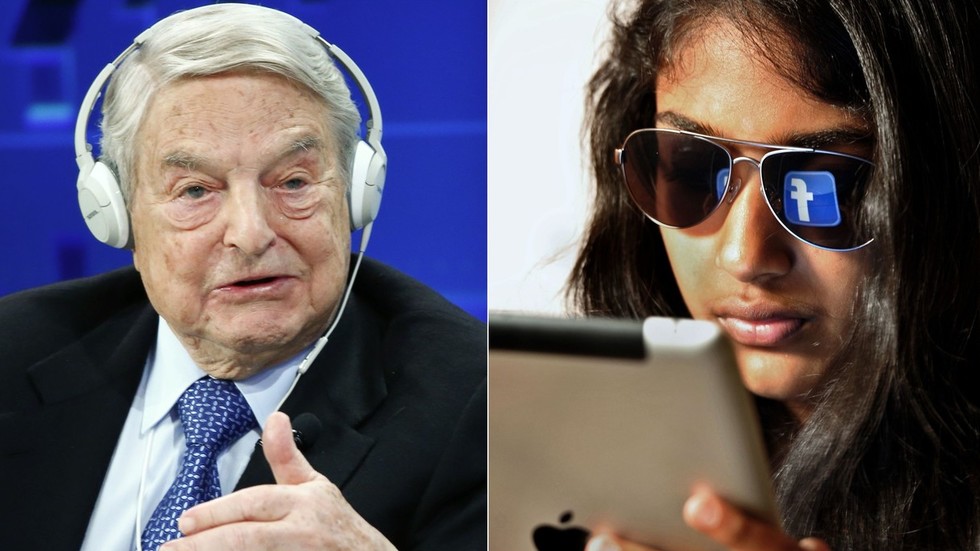 Why are Soros and Congress are fact-checkers for Facebook?

Who checks the fact-checkers? Facebook leaves verification to groups funded by Soros, US Congress

In its crusade against ‘fake news’, Facebook has vowed to fight for impartiality. However, when it comes to fact-checking, it seems to rely on sources, which have links to the US government, and renowned political meddlers.

For more than two years, the social media giant has been seeking to convince the public that it does its best to take a stand against malicious disinformation spread through its network and presented a whole bunch of instruments aimed at revealing and countering false narratives.

It appears, though, that Facebook heavily relies on decisions taken by some third-parties in its ‘anti-disinformation’ policy.

Submissions from the so-called fact-checkers – alongside some feedback from users – seem to be the primary source on which Facebook relies when saying a post is ‘false’.

Facebook proudly boasted that all the “partners” it cooperates with were “certified” through what it calls “the non-partisan International Fact-Checking Network” or IFCN.

However, the social network’s choice of people to trust with the power to decide what is true or false does raise questions. This seemingly impressive “international network” Facebook mentions is a project run by Florida-based private school of journalism – the Poynter Institute for Media Studies.

The project, which Facebook apparently uses as a sole instrument to find trustworthy “partners,” seems to be way more than just a selfless initiative aimed at helping people navigate through questionable information.

The IFCN was launched in 2015 following a generous donation totaling $300,000, which the Poynter Institute received from two sources. One of them is the National Endowment for Democracy (NED) – a “soft-power” organization, which is funded primarily through annual allocations from the US Congress. Another one is the Omidyar Network – a foundation run by the eBay founder and self-described “progressive” billionaire Pierre Omidyar.

Although he has not yet apparently gained as much fame – or infamy for that matter – as another US billionaire and renowned political meddler, George Soros, Omidyar has also lately shown himself as a major patron of regime-change operations. As early as in 2014, the US media reported that Omidyar supported anti-government groups in Ukraine that opposed the then President Viktor Yanukovych, who was ousted during Maidan.

A report by Forbes also suggested that the billionaire was one of the major funders of the Kiev-based Hromadske TV, which harbored anti-Russian views while backing the violent 2014 coup. Most recently, a group of journalists revealed that Omidyar funds a wide range of media outlets through foundations, nonprofits and other cutouts that in fact promote the liberal interventionist agenda.

Notably, two years after the launch of the IFCN Omidyar teamed up with none other than another “liberal interventionist” – Soros – to channel some $1.3 million into the project to support its development.

The Poynter Institute itself also has the Omidyar Network as well as the Democracy Fund – another foundation linked to the eBay founder – on its list of major donors, alongside Open Society Foundations (OSF) run by Soros and the NED.

The list of “certified” fact-checkers provided by the IFCN certainly looks impressive. It includes such international news agencies as Associated Press and Agency France Press (AFP), which appear on the list along with its branch offices in a dozen and a half countries. In total, the ‘network’ describes 66 organizations as “verified signatories” of the self-styled “code of principles” it developed.

However, the impartiality question remains. At least some of the organizations listed as reliable suppliers of the ultimate truth and described as “partners” by Facebook in fact receive substantial funding from the likes of Soros and Omidyar – or even directly from Western governments.

One of these organizations called PolitiFact even enjoys what it calls “administrative support” from the Poynter Institute while receiving significant funding from Facebook itself. The US-based fact-checker also collected regular donations from Omidyar’s Democracy Fund since at least 2013, which amounted to between $125,000 and $250,000.

Across the pond, the British Full Fact charity lists the Omidyar Network and Open Society Foundations among its top-5 donors. And in the Philippines Omidyar is backing the Rappler, a news site that also made its way to the IFCN fact-checkers’ list while opposing President Rodrigo Duterte.

Together, Omidyar’s Luminate Group and Soros’ OSF also provided a quarter of the funding, which a South Africa-based fact-checker, the ‘Africa Check’, received in 2018. Meanwhile, another such organization based in Turkey and called Teyit got its funds directly from Western governments in the form of “financial support”provided by the British embassy in Ankara as well as the European Endowment for Democracy – a foundation financed directly by most EU states along with Switzerland and Norway.

Some of the organizations on the list also manage to collect donations both from Western governments and the “liberal interventionists.” One such example is the Columbian ‘La Silla Vacia’ group, which received 14.5 percent of its funding from Soros, 9.5 percent from the British embassy and another four percent from the NED.

It seems, after all that, the accusations of “bias” Facebook complained so bitterly about in 2018 might be not as unsubstantiated as the social media giant would like it to appear. Back then, Facebook’s project manager, Tessa Lyons, rhetorically asked if it is possible to have a set of fact-checkers that are widely recognized as objective in today’s world. That’s a really good question, which Facebook might need to ask itself again.