Who started the fire at Jerusalem’s Al-Aqsa Mosque on the same day as the Notre Dame arson fire? 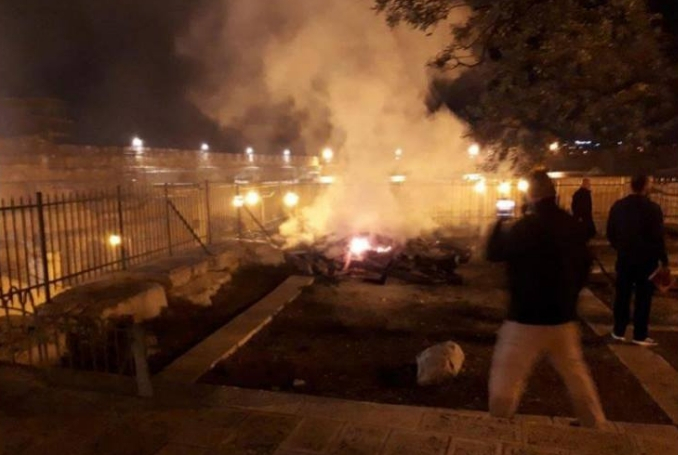 A fire broke out at Al-Marwani Prayer Room in the Al-Aqsa Mosque compound on April 15. (Photo: via Social Media)

Who started the fire at Jerusalem’s Al-Aqsa Mosque on the same day as the Notre Dame arson fire?

A fire broke out at the revered Al-Aqsa Mosque compound in Jerusalem just as flames ravaged the Notre Dame Cathedral in Paris.

Footage showing smoke and fire emerging from the roof of a structure known as the Marwani Prayer Room, or Solomon’s Stables, could be seen on social media. The Palestine News Agency, the official outlet of the Palestinian National Authority, cited a guard as saying Monday that “the fire broke out in the guard’s room outside the roof of the Marwani Prayer Room, and the fire brigade of the Islamic Waqf handled the matter successfully.”

No injuries or damage was reported during the short blaze.

News of the incident at the Al-Aqsa Mosque, the third holiest site in Islam and central to the ongoing Arab-Israeli conflict, was largely overshadowed by a much larger blaze engulfing the Notre Dame Cathedral at the same time. There was no evidence of any link between the two fires.

The Palestine News Agency reported that Palestinian President Mahmoud Abbas’ office “expressed its deep regret Monday over the fire that broke out at the historic Notre Dame Cathedral in the center of the French capital of Paris, which caused the collapse of the cathedral tower.”

“The Presidency confirmed its solidarity and sympathy with our friends in France over this incident,” the outlet added.

The Marwani Prayer Room is located underneath the southeastern corner of the Temple Mount, known to Muslims as Haram al-Sharif, which contains both the Dome of the Rock and Al-Aqsa Mosque. Sheikh Azzam al-Khatib, director general of the Jerusalem Waqf and Al-Aqsa Mosque Affairs Department, told Jordan’s Al-Mamlaka TV that the fire broke out in the courtyard and preliminary information suggested that it may have been caused by children tampering in the area.

Palestinian Muslims hold Friday prayers in the Marwani Prayer Room, also called Solomon’s Stables, located under the southeastern corner of the raised platform which holds the Dome of the Rock and Al-Aqsa Mosque in Jerusalem’s Old City, September 5, 2014. A fire broke out at the sacred site just as a much larger blaze engulfed the Notre Dame Cathedral in Paris.AHMAD GHARABLI/AFP/GETTY IMAGES

The compound as a whole is located in Old City section of East Jerusalem, initially occupied by Jordan during the 1948 Arab-Israeli conflict that followed the establishment of Israel, but later seized by Israel during a second war in 1967. Israel annexed the entirety of the city in 1980 in a move not recognized by much of the international community, though Jordan’s monarchy was granted custodial rights over the Islamic holy sites.

In a controversial move, President Donald Trump recognized the entirety of Jerusalem as the capital of Israel in December 2017, dismissing competing Palestinian claims to the city and upsetting a broad international consensus.

No official explanations have yet been provided for either of Monday’s fires, though French media has suggested that the fire at the Notre Dame Cathedral may have been related to ongoing renovation efforts.