UK spying on Trump in advance of his state visit 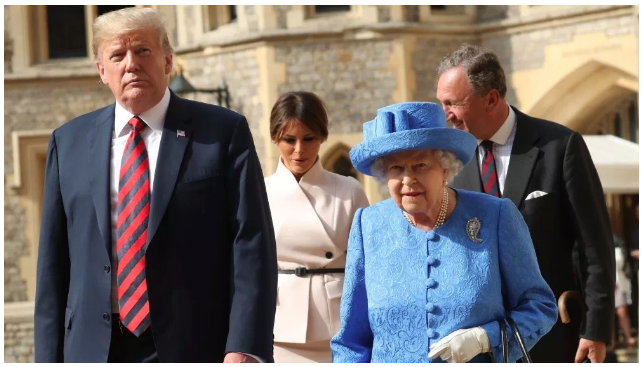 UK spying on Trump in advance of his state visit

DONALD Trump has accused the UK of helping the Obama administration SPY on him during the 2016 presidential campaign.

The US President made the sensational claim in a tweet today, quoting the right-wing conspiracy-peddling website One America News Network (OANN).

He first quoted a former CIA analyst making the spying accusation on OAN, then added: “WOW! It is now just a question of time before the truth comes out, and when it does, it will be a beauty!”

The bizarre accusation comes just days after it was revealed Trump would be undertaking a state visit this summer.

It may be he is hoping to ramp up tensions ahead of the visit in a bid to improve his leverage in any political discussions which may take place.

However, the accusation actually dates back to at least 2017 and has been denied by both the Obama administration and MI6.

A British security official was quoted by Reuters as saying the accusation was “totally untrue and quite frankly, absurd.”

Meanwhile, Donald and Melania will not stay at Buckingham Palace during their state visit this summer because the Queen has got the builders in, it’s been claimed.

Royal sources reportedly said the Monarch can’t let the US President stop over as his staff can’t stay in the East Wing as it will be closed during a £365m renovation programme.

Buckingham Palace revealed that the Trumps will visit the UK for three days from June 3rd to the 5th which is timed to coincide with the 75th anniversary of D-Day.

It comes more than two years after Theresa May first offered the visit when they met in January 2017 at the White House.

However, any hopes of the Republican leader staying over at the Palace have been scuppered.

Sources said the Trumps would have been expected to stay in the palace’s historic Belgian Suite which is still open.

However, it’s reported none of their entourage of aides or staff could be accommodated due to the closure of the East Wing.

The Daily Mail reports there is no suggestion the couple will be offered other royal accommodation which means they will most likely take up residence at Winfield House.

The manor house – which is the palatial London home of the US Ambassador – is where they stayed last summer.

However, royal aides insisted there was no snub intended to the President and First Lady pointing out even the Queen may be forced to leave her official London home during the renovation.

President Trump made a two-day working visit to the UK last July – where he met The Queen and spoke exclusively to The Sun.