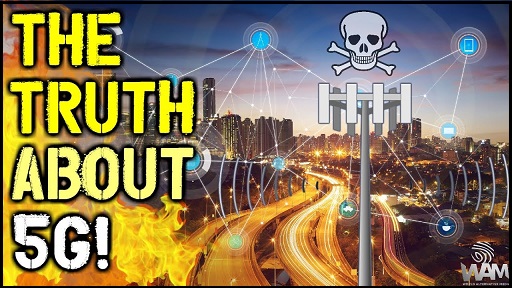 SCAM OF THE CENTURY

The 5G Energy Grid Cannot Be Deployed As Hyped

This exposé ought to come as very good news for the many folks who are legitimately concerned about the ongoing 5G roll-out across America.

As it turns out, the Big Telcom corporations that are hyping the deployment of 5G are grossly misrepresenting the practical functionality of the actual 5G networks that have been supposedly activated locally.

First, don’t take it from us, read what the experts have to say about this “Scam of the Century”.

If the reader understood the indisputable 5G facts presented in the preceding link, they now know that the 5G roll-out simply will not — CANNOT — be rolled out as planned and/or advertised.

For the foreseeable future, the deployment of 5G will take place primarily in the big cities and specifically in large venues where super-techies and cyber-geeks congregate to brag about their download and upload speeds. For the uninitiated, the technology paradigm required for 5G networks to be fully functional is such that special 5G antennae must be positioned in a high-density configuration. And, certainly in much higher density than the current 4G energy grid.

The signals of the significantly higher 5G electromagnetic frequencies and microwave radiation travel in much shorter distances. Therefore, they require a multitude of cellphone and microwave towers and antennae to be placed wherever 5G is fully operational.

The good news is that will not happen in the rural areas or the suburbs anytime soon.

While it’s currently operating in some isolated urban areas, 5G will only be efficiently working in isolated pockets where all the technology is perfectly positioned and the signals are beaming flawlessly. Even those high-intensity hotspots in those cities where 5G has supposedly ‘arrived’ will there be spotty service.

KEY POINT: You know it’s fake when the Big Telcom corporations sue each other and win because of patently false 5G advertising. See: Settled Lawsuit Proves 5G Advertising Is Fake

The truth is that those few areas, where 5G is somehow made fully functional, will become KILL ZONES—literally. These hotspots will become hot alright; so hot your skin will be fried as your insides are cooked…but you won’t even know it (also known as a soft kill). Eventually, everyone’s brain will be scrambled. Don’t believe us, read the following exposé.

Because of this inevitable outcome, the cities and various venues that boast about their new and improved 5G connectivity will become notorious as kill zones. Who would ever want to step inside a location well-known for being a soup of exceedingly dangerous electro-pollution?!

As a matter of scientific fact, the 5G EMFs and microwave radiation will be disseminated at such unsafe levels that new laws will promptly be written to warn several classes of patients who suffer from various medical ailments and health conditions. Yes, that’s how dangerous 5G truly is.

Why, pray tell, would anyone ever want to live inside the boundaries of such a perilous 5G kill zone?

For those who disbelieve such an eventuality, please consider the following video: 5Ggate: 5g is not an upgrade, it’s a potential kill grid (Video)

What this really means is that 5G is a military deployment fully capable of carrying out genocide by those who control the kill grid. This very real possibility is further discussed here: 5G GENOCIDE: The Most Lethal NWO Conspiracy of the Third Millennium

Anti 5G groups popping up all over the place

Because of the extraordinary backlash against what is essentially a deployment of 5G weaponry, communities everywhere are shutting it down.

Those who are grimly aware of the adverse health effects and severe medical consequences of exposure to 5G are on a mission to halt the roll-out by any means necessary.

The rapidly emerging grassroots advocacy groups are so fierce and furious that many cities and counties will be forced to suspend their respective roll-outs.

There are even those courageous anti-5G rebels who are going a step further when their loved ones are recklessly being put in harm’s way. These people are quite livid that the government would even permit such harmful technology in residential subdivisions where young children and pets will be exposed to the hazardous frequencies 24/7.

As more folks awaken to the reality that 5G technology has completely avoided the mandatory testing for health and safety issues, they quickly climb on board the anti-5G train. That untested 5G energy grids are being constructed prematurely has enraged people throughout the USA.

Some health advocates and environmental groups are so angry that they have resorted to this: 5G Roll-out Facing $1 Trillion Class Action Lawsuit.

The best way to proceed regarding the ongoing 5G roll-out, in spite of the highly sporadic and low-intensity deployment, is to stop it dead in its tracks.

Every person, every family, every community ought to assume that 5G is coming to a neighborhood near them. Regardless of the practical obstacles already mentioned, the forces behind this absurd, yet deliberate, roll-out are the most powerful on the planet. The moneyed interests behind this deployment also own the U.S. Federal Government—lock, stock and barrel.

Even the relatively low-level Telcoms stand to make huge profits when the various revenue streams are flowing at peak level. And, the money-making that will occur during the build-out of the Internet of Things, alone, promises to be an extremely lucrative enterprise. It’s crucial to understand that it’s the Internet of Things (IoT) that is at the very core of this New World Order scheme to control every person on Earth. Only when the IoT is operating at full tilt will the NWO globalist cabal exert complete command and control over the entire planetary civilization.

Therefore, every wrench that can be thrown into the 5G juggernaut will serve to slow it down and prevent the planned lockdown of the world community of nations.

Everyone can do their part to force TPTB to abort the deployment of 5G. Here’s one simple initiative for anyone who wants to begin today.

The bottom line here is this: 5G ROLL-OUT is an Ongoing National Emergency that Requires an Immediate Shutdown by the American People.

While it’s true that the urban dwellers will get hit very hard by this frequency and radiation weaponry, eventually the suburbs and rural areas will be hardwired accordingly.

As the 5G technology is refined and made more cost-effective, the globalists will attempt to foist it on every community in America.

Therefore, we ask that every individual circulate this important video far and wide.

For it is a sufficient degree of education and awareness that will ultimately terminate 5G…
before it terminates US.

5G & the Internet of Things

In point of fact, the Internet of Things can only be fully operational when the 5G power grid is functioning at full throttle. Hence, it’s crucial to comprehend the satanic nature of the rapidly manifesting technological paradigm defined by the Smartphone, 5G, and the Internet of Things. Not to do so will soon mean the difference between good health and chronic illness for many; life and death for the weak, especially the children and elderly, the immuno-suppressed and EMF-hypersensitives.