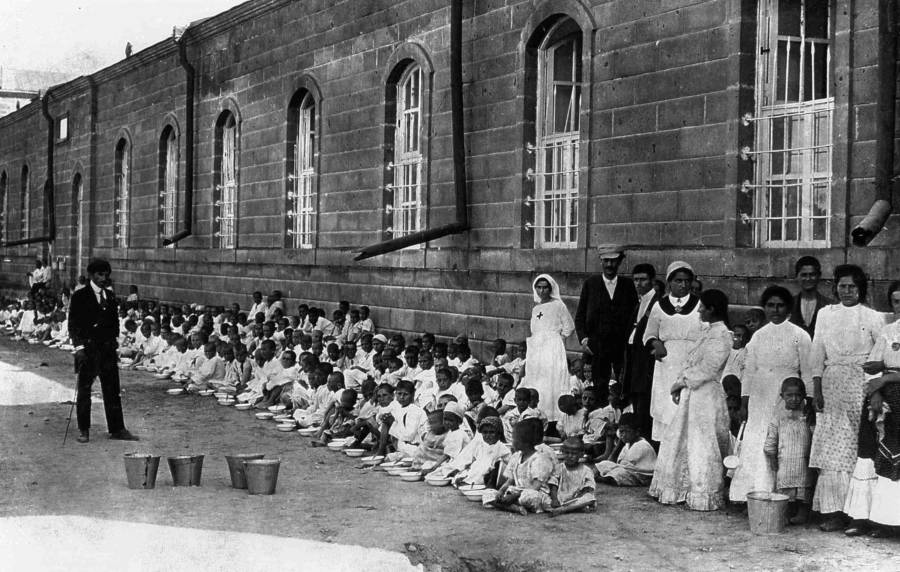 Armenian Genocide: Mothers and children forced into migration before death by starvation, illness and murder. Refugee line on street

Editorial: Our Path to Justice is Set by Our Roots

Our path to justice is set by our roots

The White House, once again, opted to side with Turkey and continue its complicity in Ankara’s campaign to deny the Armenian Genocide. Furthermore, President Donald Trump chose to ignore the will of 49 states of our union that have justly and rightfully recognized the Armenian Genocide, and issued a statement on Wednesday further cementing the administration’s tone deaf to this issue.

However, as Armenians around the world commemorate the Armenian Genocide, they will be joined by the people and government of France, which, for the first time, is commemorating the Genocide as a national day of remembrance. France joins Argentina and other countries whose leaders have seen beyond Turkey’s arrogance and lies and have marshaled their citizens to stand on the side of truth and justice.

Few weeks after President Emanuel Macron of France announced his intention to declare April 24 a national day of commemoration for the Armenian Genocide, Italy’s Chamber of Deputies overwhelmingly adopted a resolution recognizing the Genocide, joining a growing list of European countries to advance an agenda that values humanity and human rights.

The Armenian people’s struggle to attain international recognition for the Armenian Genocide, which began in earnest in 1965—the 50th anniversary—has morphed into not only legislatures and presidents acknowledging the truth, but also in some instances governments taking responsibility for their role in advancing the Ottoman Empire’s state policy to eradicate Armenians. The resolution adopted by Germany’s Bundestag a few years ago demonstrated the willingness of nations to come to terms with their pasts.

Ankara believes that perpetuating this lie will somehow make the events of 1915 disappear. Then again, if Turkey’s President Recep Tayyip Erdogan recognizes the Genocide, he would have to rethink his current policies of silencing its own population, which mirror the strategies employed by his predecessors when they set out to destroy the Armenian population.

The will of the people to advance the cause of justice for the Armenian Genocide has not wavered and that will has only proliferated around the world, most notably in Turkey, where for the past several years concerned Turks are joining Armenians to not only commemorate the Armenian Genocide but demand justice from their government. Garo Paylan, an Armenian member of the Turkish Parliament representing the People’s Democratic Party (HDP), called on his fellow lawmakers to take up the issue of the Armenian Genocide in Turkey’s Grand National Assembly. The mere mention of this a few years back from the dais of Turkey’s legislature would have resulted in his arrest and much worse.

The fact remains that stories of survivors that over the last century or so have been passed down to younger generations have cemented the Armenians’ will to not only survive adversity but to advance the cause of justice. Although we faced similar horrors at the hands of Azerbaijanis when beginning in 1988 and in response to Artsakh liberation movement, they carried out systematic massacres of Armenians in Sumgait, Baku, Kirovabad, Maragha and Shahumian, employing the same vile and brutal tactics as their Turkish cousins, our resilience as a nation proved to be a potent force against the perpetrators who were advancing a genocidal policy. Artsakh was liberated and is now the crucial link in the chain that is the Armenian Cause and the aspirations of the Armenian Nation.

Today all facets of our society have lined up behind the truth. Publications such as The New York Times, the Washington Post and Los Angeles Times, which a decade or so ago hesitated—and refused—to use the word “genocide” to describe the events of 1915 have all called on the White House to recognize the Armenian Genocide. Public schools are including the study of the Armenian Genocide in their curricula, while historians are tackling the issue from various angles and perspectives to paint a more accurate picture of the 20th century.

All of these advances have happened because the Armenian people have been adamant and they have parlayed their righteous convictions into decisive action to advance and pursue the Armenian Cause.

As we remember the victims of the Armenian Genocide and those who perished in similar massacres before and after 1915, we must be cognizant that our collective will to right the injustices of the past is a potent catalyst in advancing our cause and brick-by-brick shattering the wall of lies and silence that continue to stand in the way of recognition, reparations and restitution for the Armenian Genocide and the ultimate aspiration of our Nation—a Free, United and Independent Armenia.