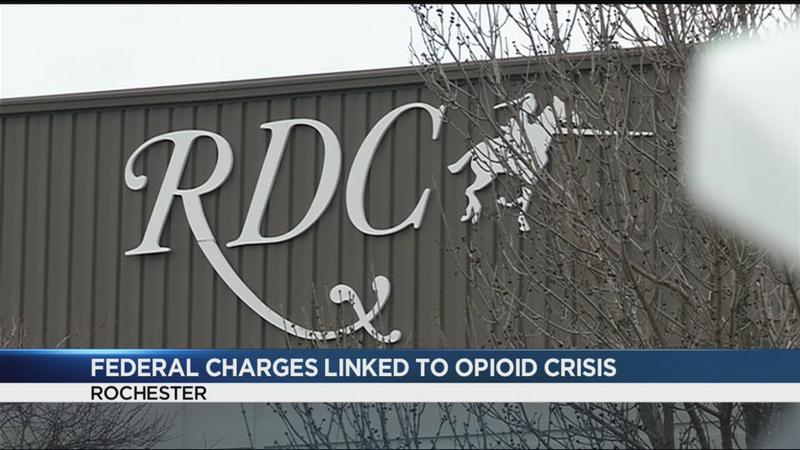 Federal criminal and civil investigations into the operations of Rochester Drug Cooperative Inc. on Tuesday led to the first criminal charges against a drug distributor and “drug company executives for diversion of opioids,” federal prosecutors said.

Rochester Drug Cooperative, or RDC, agreed to a $20 million settlement to partly resolve the accusations against it. RDC also agreed to a strenuous monitoring program designed to ensure that it does not retreat into the lax oversight that has apparently plagued the company operations in recent years.

The investigation, first reported in the Democrat and Chronicle in August, has been ongoing since 2017.

This is the second time in four years that the federal Drug Enforcement Administration, or DEA, found significant problems with the RDC monitoring system. In 2015 RDC settled a civil lawsuit from the U.S. Attorney’s Office by paying $360,000 in penalties, after admitting that it did not, as required, report “thousands of purchase orders from RDC” to DEA through an electronic reporting system.

“We made mistakes, and RDC understands that these mistakes, directed by former management, have serious consequences,” RDC spokesman Jeff Eller said in a statement Tuesday.

Two former RDC officials — Laurence F. Doud III, who had served as chief executive officer, and William Pietruszewski, the former chief of compliance — were criminally charged as part of the investigation.

Pietruszewski has pleaded guilty and is cooperating with authorities. He admitted to narcotics and fraud conspiracies, acknowledging that he knowingly did not report suspicious opioid orders from pharmacies to the DEA.

The indictment against Doud alleges that, for at least five years, RDC distributed highly addictive substances to pharmacies and that senior management, including Doud, knew those substances were being “sold and used illicitly.”

Doud allegedly “cared more about profits than laws intended to protect human life,” said Geoffrey Berman, the U.S. Attorney for the Southern District of New York, in a Tuesday press conference. RDC allegedly “routinely prioritized sales over compliance,” he continued, and was “the knight in shining armor for pharmacies that had been cut off by other distributors.”

Though largely unknown locally, RDC has swelled into the sixth largest pharmaceutical distributor in the country. Founded in 1905, the company is headquartered in Gates and has a large distribution operation in New Jersey, closer to the New York City region that is home to many of RDC’s pharmacy customers.

Estimates of RDC annual revenue run between $1 billion and $2 billion. The company is a cooperative of independent pharmacies, meaning its members are its very customers — a relationship that some authorities maintain can be dangerously incestuous and encourage the negligent oversight.

RDC sells pharmaceuticals and other health-related products to more than 1,300 pharmacies.

RDC “did not anticipate, nor were we prepared for, this dramatic increase in opioid prescription volume,” RDC spokesman Eller said in the statement. “The entire industry has been affected.”

“ … From 2012 to 2017, we did not have adequate systems in place nor were our compliance team and practices rigorous enough to provide adequate controls and oversight over the increased demand for narcotic drug products from pharmacies.”

According to court papers:

“Because it knew that reporting these pharmacies would likely result in the DEA investigating and shutting down its customers, Rochester Drug Cooperative’s senior management directed the company’s compliance department not to report them, and instead to continue supplying those customers with dangerous controlled substances that the company knew were being dispensed and used for illicit purposes,” authorities said in court papers.

“Why did they do it? The answer is greed,” said Berman.

RDC agreed to three years of monitoring by an independent compliance official who will report regularly to the DEA. The $20 million fine is scheduled to be paid over five years.

The criminal charges against former CEO Doud and former compliance officer Pietruszewski could be a precedent-setting move with the prosecution of drug company executives. To date, state and federal authorities have sought civil actions to try to slow the opioid crisis.

Last year Doud, who had been ousted from the company, sued RDC. He claimed he was being scapegoated for the DEA investigation.

That suit is still pending in federal court in Rochester.

At a news conference Tuesday, Monroe County Sheriff’s Office Undersheriff Korey Brown called RDC’s criminal activity “large scale drug dealing.” The Sheriff’s Office was not involved in the investigation, but wanted to highlight the damage that can be done to a community with opioids.

“You can’t be in today’s society and not know how bad the opioid crisis is,” Brown said. “… it’s horrifying what they did.”

A popular industry publication shows that in 2016 pharmaceutical distributors were responsible for the handling of almost 96 percent of drugs on the market.

That same publication, from the Healthcare Distribution Alliance Research Foundation, says that U.S. pharmaceutical sales from distributors grew from $305 billion in 2013 to $408 billion in 2016 — a 34 percent increase.

“Our country is in midst of a…drug abuse epidemic,” said Berman Tuesday. “Our office will do everything in its power to bring to justice anyone responsible for unlawfully fueling this epidemic, and that includes executives who illegally distribute drugs from their boardrooms.”