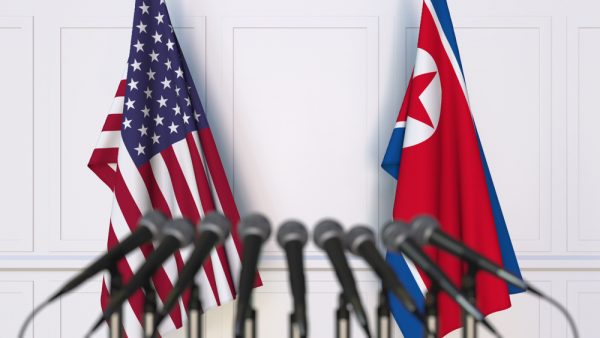 An explosive report by Reuters confirms that John Bolton sabotaged the denuclearization talks between Kim Jong un and Donald Trump in Hanoi in February. According to a March 29 exclusive by journalists Lesley Wroughton and David Brunnstrom:

“Donald Trump handed North Korean leader Kim Jong Un a piece of paper” demanding that Kim surrender all of his “nuclear weapons and bomb fuel to the United States.” Trump also added a number of unrelated demands including “fully dismantling” all “chemical and biological warfare program(s)…. and ballistic missiles, launchers, and associated facilities.” Trump surprised Kim by demanding complete, unilateral disarmament in exchange for a flimsy promise to lift economic sanctions sometime in the future. Naturally, Kim rejected the offer.

Here’s more from the same article:

“The document appeared to represent Bolton’s long-held and hardline “Libya model” of denuclearization that North Korea has rejected repeatedly….North Koreans rejected Bolton’s repeated demands for it to follow a denuclearization model under which components of Libya’s nuclear program were shipped to the United States in 2004.

Seven years after a denuclearization agreement was reached between the United States and Libya’s leader, Muammar Gaddafi, the United States took part in a NATO-led military operation against his government and he was overthrown by rebels and killed” (“Exclusive: With a piece of paper, Trump called on Kim to hand over nuclear weapons”, Reuters)

Bolton presented Kim with an offer he knew Kim would reject, the same offer that led to the destruction of Libya and the savage murder of Gaddafi. Bolton wanted the talks to fail so he could push for tougher sanctions that would pave the way for regime change. That was his goal. Kim’s nuclear weapons were never the target, they were merely the pretext for intensifying the economic strangulation, the relentless belligerence and the threats of war.

But why would Trump agree to go along with this fraud? And why has Trump deployed more troops to Syria while green-lighting Israel to annex the Golan Heights?

Is there a connection between Trump’s (recent) foreign policy reversals and the termination of the Mueller investigation? Did Trump make a deal with his deep state antagonists to get Mueller off his back?

It’s hard to say, but there was no reason for Mueller to wrap up the investigation. The probe was doing exactly what it was supposed to do: Create a 4th branch of government that was empowered to hector, harass and indict anyone it chose in order to keep the administration on the defensive, derail any effort to normalize relations with Russia, and undermine the legitimacy and moral authority of the president. Why would Mueller give up all that if it wasn’t part of some undisclosed Grand Bargain?

On a personal level, Trump trusts Kim which is why he probably wanted to cut a deal. An article in last week’s Korea’s Hankyoreh news supports this view. Check it out:

“During the North Korea-US summit in Hanoi last month, US President Donald Trump reportedly had a positive perspective on relaxing sanctions on North Korea provided that there was a “snapback” clause that would reinstate sanctions if the North failed to implement its agreement. North Korean Vice Foreign Minister Choe Son-hui made this statement during a briefing to foreign diplomats in Pyongyang on Mar. 15, but her full remarks hadn’t been made public until now.

According to the text of Choe’s remarks released on Mar. 25, she said, “When we made a practical proposal in the talks, President Trump adopted the flexible position that an agreement would be possible if a clause was added stating that the sanctions could be reinstated if North Korea resumed nuclear activities after the sanctions were lifted.” But Choe went on to say that, “because of their continuing hostility and mistrust, US Secretary of State Mike Pompeo and White House National Security Advisor John Bolton created obstacles to the two leaders’ efforts to have constructive negotiations, and ultimately the summit didn’t produce meaningful results.”

. … According to Choe’s statement … the two leaders appear to have explored the possibility of trading Yongbyon’s shutdown for partial sanctions relief. … Choe’s remarks imply that the ultimate reason the summit concluded without an agreement was because of resistance from Pompeo and Bolton.” (“Trump responded positively to relaxing sanctions with “snapback clause” during Hanoi summit”, Hankyoreh News)

The Hankyoreh article corroborates much of what is stated in the Reuters piece. Both articles acknowledge that the nuclear talks were scuppered by Bolton.

The media has consistently misled its readers about what actually took place at Hanoi and who should ultimately be held responsible for its failure. According to CNN:

“Kim had demanded total sanctions relief upfront in exchange for only partial denuclearization, leaving the two sides at an impasse….(Wrong) Trump cast his decision to walk away as evidence that he will not accept a bad deal, (Wrong) but the abrupt conclusion of his much-ballyhooed second summit nonetheless amounted to the most stinging setback yet in his effort to achieve North Korea’s denuclearization through direct talks with its leader…. (Wrong, it wasn’t a setback, it was deliberate.)

More than anything, the failure to produce results during the second summit called into question the personality-driven diplomacy that has been at the core of Trump’s effort to end the North Korean nuclear threat.” (Wrong, again) (“Takeaways from the Trump-Kim Hanoi summit”, CNN)

None of this is true. The meetings didn’t fail because of Trump’s “personality-driven diplomacy”. They failed because Bolton deliberately blew them up. That’s what happened. As one would expect, virtually everything CNN tries to pass off as evenhanded, thoroughly-researched journalism is nothing more than misleading gobbledygook served up by political activists. (The dismal Hanoi coverage helps to show that the Trump-collusion fiction was not a “one off”, but a critical feature of media policy which aims to shape the news according to the political agenda of elites.)

But if the Trump administration is unwilling to honestly negotiate with the North, then how can Kim possibly move forward with his plan to establish peaceful relations with his friends in the South and his allies in the region?

The only way forward for Kim is to bypass the Trump administration altogether and strengthen relations with those who will help him achieve his strategic objectives. He must show that he is a trustworthy partner who is willing to continue along the path of denuclearization regardless of the obstacles and provocations created by the United States. He must continue to seek the input of leaders in Beijing, Moscow and Seoul and prove to them that he is unwaveringly committed to ridding the peninsula of its nuclear weapons in the interests of peace and security. Kim must welcomeinternational weapons inspectors to monitor the decommissioning of his nuclear arsenal and his nuclear enrichment plants. He must increase the frequency of his visits to Seoul where his public approval ratings have skyrocketed and where his efforts for peace and reunification are applauded by nearly 80% of the people. He must “promote his own denuclearization timetable” and present his case to the UN Security Council for review. He must convince the public that he will not backtrack on his ironclad commitment to dialogue, cooperation, economic integration and peace.

According to Hankyoreh News, Kim’ Jong un’s chief of staff and protocol officer made a secret trip to Moscow last week “fueling speculation that Kim Jong-un may be about to pay a visit to Russia.” At the same time, a senior national security official (Kim Hyun-chong) from South Korea visited Russia as well.

Can you see what’s going on? What these secret meetings suggest is that regional leaders are now developing a “post-Hanoi” strategy that will take into account Kim’s eagerness to cooperate and Washington’s obstinate rejection of any policy that does not further enhance its own vicious grip on power. The Trump team is no longer in the loop. Regional bigwigs are taking matters into their own hands and moving forward.

As we pointed out in an earlier piece, Kim is neither a firebrand nor ideological. He is a contemporary man who who wants to make his own mark on the world, lead his country into the modern era, and join the coalition of nations that are fast becoming the biggest trading block in history.

Here’s how author John Delury summed it up in a recent op-ed in the New York Times:

“Mr. Kim wants to be a great economic reformer…(He wants to) shift the regime’s focus, from security to prosperity….He wants North Korea to … catch up with and integrate into the region, and it’s in everyone’s interest to help him do so…”(“Kim Jong-un Has a Dream. The U.S. Should Help Him Realize It”, New York Times)