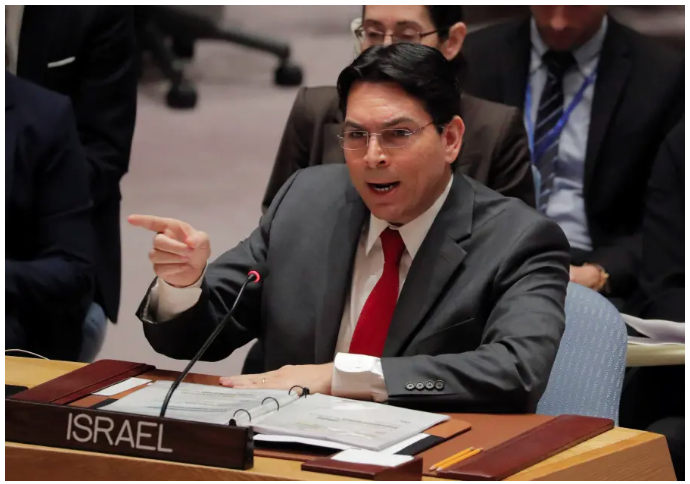 The only way to stop antisemitism is to criminalize it, Israel’s Ambassador to the UN Danny Danon told reporters in New York on Monday.

“The time for talking and having a conversation is over,” Danon said. “What Israel and the Jewish community around the world demand is action – and now.”

Danon, speaking on the sidelines of the United Nations Security Council meeting, said that those who engage in antisemitism “must be punished. Whether it is here at the UN [or by] political leaders, editors, policy pundits or college professors, it does not matter.

“Antisemitism should have no place in our society,” he continued. “Until it becomes criminal, this bigotry will persist; it will fester. It is only a matter of time until it erupts again in violence and bloodshed.”

Danon spoke just two days after a shooter, believed to be a white supremacist, killed one Jewish worshiper and wounded three others at the Chabad synagogue in Poway California. That same weekend, The New York Times published a cartoon widely held to be classically antisemitic. The paper has since apologized. Danon linked the two events with a shooting that occurred at Pittsburgh’s Tree of Life synagogue in October, in which 11 worshipers were killed.

“From the Tree of Life synagogue in Pittsburgh to the Chabad synagogue in Poway California, antisemitism is no longer a fringe bigotry in the US,” Danon said. “Then, as now, all the right people are saying all the right things. They express their sympathies and call for an end to this violence and bigotry.

“It seems that we have learned nothing from the Pittsburgh attack, and we are likely to continue to do nothing following the attack in San Diego,” Danon continued.

He added that since October, members of Congress have openly exposed themselves as antisemites, and that the NYT cartoon “could have been taken from the pages of Der Stürmer, the Nazi propaganda paper.

“And yet, these actions have gone unpunished,” Danon said. “I have not seen the NYT [hold] anyone accountable for this horrible cartoon. When you have pictures, cartoons, words [and] demonstrations, it leads to violence and shootings.”