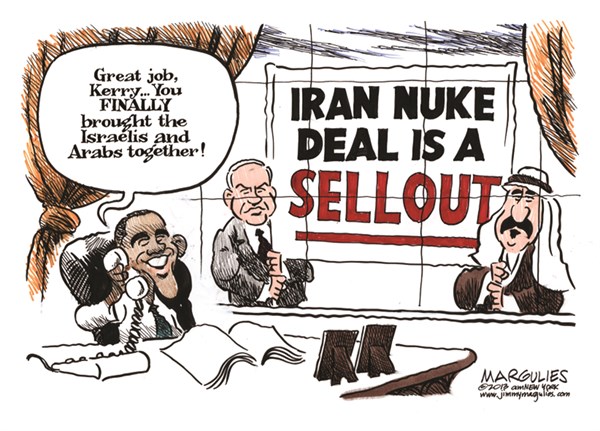 Israel has never been a victim. Zionist belligerents work diligently to expand their control in the region. This objective is not widely accepted in mainstream political circles since critical criticism is a risky endeavor when confronting truth to power. The turmoil in Egypt and subsequent regime change, the over throw and elimination of Gaddafi in Libya and the ongoing Israeli ISIL induced conflict in Syria all benefit the Khazar usurpers. Well before the NeoCons commandeered U.S. foreign policy, Jewish influence over their Congressional puppets and administration stooges was prevalent, awaiting the time when U.S. forces would be used to serve the designs of Zionism inroads.

In order to understand the objective, take the time to review the analysis of Israel’s Grand Design: Leaders Crave Area from Egypt to Iraq.

“America-firster used The American Mercury magazine to warn of the danger posed by Zionism and its rule of Washington and the Mideast. John Henshaw wrote this article shortly after Israel laid claim to the annexed land during 1967 Arab-Israeli war. This article first appeared in the spring of 1968.”

“The grandiose idea of an Israeli empire controlling the Middle East is now for the first time arousing great popular enthusiasm among Jews everywhere in the world.”

For all practical purposes, Iraq no longer exists as a country. Back in the 1980’s the Iraq-Iran War presented an opportunity to use Saddam Hussein to destroy the Ayatollah Khomeini Revolutionary Guard theocratic junta. When the CIA induced coup d’état installed the Shah Mohammad Reza Pahlavi, Iran was the darling of détente. “Insofar as Pahlavi’s Iran is concerned, even oppositional circles in the 1960s and 1970s had a complex and sometimes favorable approach to the State of Israel.”

After the Iranian revolution, the rhetoric heated up to the point that Iran was demonized as the new Hitlerian scourge. Israel claims that Iran was an existential threat never resonated with objective observers, since the Zionist State was the military power that developed a vast nuclear arsenal.

However, Israeli interests for expansion or dominating proxy neighbors now confronted a counterbalance from Iran.

With the tentative P5 + 1 Iranian agreement that set forth, in principle, Iran’s right to pursue a nuclear energy program has Israeli Prime Minister Benjamin Netanyahu screaming: “one of the darkest days in world history”.

Kenneth M. Pollack from the Brookings Institute offers a projection for Israeli response in the article, Regional implications of a nuclear agreement with Iran.

“First, I suspect that the Israelis will ramp up their covert campaign against Iran and its nuclear program. More Iranian scientists may get mysteriously assassinated in Tehran. More sensitive Iranian facilities might blow up. More computer viruses might plague Iranian networks. More money might find its way to Iranian democracy activists and ethnic minorities. Of course, even then, the Israelis may show some restraint: the Iranians are believed to have greatly improved their own cyberwar capabilities, and even a right-wing Israeli government might not want to provoke a harsh Iranian response that affected Israel’s civilian economy.

Second, I think it pretty much a foregone conclusion that the Israelis will also seek greatly expanded U.S. aid in response to a nuclear deal with Iran. In particular, it will look to improve its capability to strike Iranian targets, to defeat retaliatory missile and rocket attacks by Iran or its allies, and to ensure that Israel has a secure second-strike capability. More F-35s, greater funding for Israel’s Arrow anti-ballistic missile and Iron Dome anti-rocket systems, more capable bunker-busting munitions—these all seem like certain Israeli requests. But Jerusalem may well ask for other weapons and capabilities previously denied it, both because it may feel a strategic need for such enhanced capabilities and because it may believe that the U.S. will be more willing to provide them to secure Jerusalem’s (grudging) acquiescence to the deal.

Finally, a nuclear deal with Iran could push Israel to become more aggressive in its own neighborhood—or to take advantage of the situation to do so. The Israelis will doubtless argue that the deal has made them feel less safe, and therefore less willing to take risks on other security matters, particularly developments with the Palestinians, but potentially in Syria and Lebanon as well. (The Israelis are very comfortable with the Egyptian and Jordanian governments and are unlikely to take actions that would undermine them or diminish their cooperation with Israel.) For instance, in the wake of a nuclear deal, Israel may look to smash Hizballah and/or Hamas in Gaza again to convince them not to mount new attacks against Israel once their old Iranian allies (a strained relationship in the case of Hamas) begin coming out from under the sanctions and possibly flexing their muscles across the region.”

“Tehran has long accused Israel’s Mossad of running a campaign to assassinate Iran’s nuclear scientists and thus slow down the nuclear program. At least five Iranian scientists have been murdered, mostly by bombs planted in their cars, but no Israeli agents have been caught.”

Doubters that the Zionists are not behind continuing their regional covert warfare is provided in the essay, Israeli Special Forces Assassinated Senior Syrian Official.

“The internal National Security Agency document, provided by former NSA contractor Edward Snowden, is the first official confirmation that the assassination of Suleiman was an Israeli military operation, and ends speculation that an internal dispute within the Syrian government led to his death.”

As for the second alternative, the rush to increase military assistance begins. U.S. Offers to Help Israel Bolster Defenses, Yet Iran Nuclear Deal Leaves Ally Uneasy, might well mean that the Israeli Lobby will work overtime to extract more shekels from their American indentured servants.

“In Israel, the question was not whether the deal would be followed by a robust new military aid package from Washington, but rather when such discussions would commence and what might be on the shopping list. Isaac Herzog, the leader of the opposition in Parliament, said Tuesday night that he would soon travel to the United States “to advance a package of security measures to suit the new situation.”

Lastly, the preverbal spin has Israel Strikes Gaza in Response to Rocket Fire. How long will it be before Iran is linked to such a threatening first strike raid? The reality is that “last summer’s war between Israel and the Hamas group in Gaza, more than 2,200 Palestinians, and 73 people on the Israeli side, were killed. The war disrupted the lives of millions of people as they coped with rocket attacks and air-raid sirens.”

It would be easy to assume that the Iranian agreement is a severe setback for Israel. All the same the fallout from prospects that possible Iranian nukes will rival Iran’s claim that Israel has 400 nuclear weapons, anytime soon is far-off.

When Pravda asks, NATO to turn missile defenses against Russia?, Israel is likely to want the same capacity.

“NATO’s missile defense systems, rolled out in 2010, “were designed to protect against a limited threat like Iran, not a threat like Russia,” according to Friedrich Wilhelm Ploeger, who until recently served as deputy commander of NATO’s Allied Air Command.”

The proliferation of defense systems is more likely than the deployment of offensive missiles coming out of Iran. Israel will never enhance their own security, when they persist on escalating aggressive covert actions as they certainly advance their own death wish by planning a bombing campaign on Iranian nuclear targets.

A Greater Israel attitude is diametrically opposed to the true existential interests of Jews. Jewish residents are in more danger from their own Likudniks sociopaths than the Iranian Supreme Leader Ayatollah Ali Khamenei.

Eternal conflict bears unending combat. Only when an equable resolution to the Palestine exile is adopted that return the Israeli borders to the original pre 1967 boundaries, can there be any prospects for a lasting peace.

As sincere and knowable observers will attest, peace has never been the goal for the Zionists. It is because of this fact that the world communities of nations are so wary of dealing with Israel.

The Obama administration has been a miserable failure on so many fronts. However, the one dramatic potential accomplishment would be breaking the Zionist grip of blackmail and extortion used to further their zealot agenda, which has so gravely injured our own nation.

The Rogue Terrorism for a Greater Israel explains.

“The self-justification by Zionists for enhancing strategic security enlargement of territory never deals with the central issues. The entire concept of a homogeneous “Jewish State” under a secular Zionist regime, mocks the notion of religious faithfulness to the teaching in the Torah. The meaning of a “Greater Israel” has little to do with devotion of Jehovah.”

The Middle East will always be held hostage to Zionism as long as humanity refuses to face up to the reign of terror that defiles the actual religious scriptures in the Old Testament. Following the Talmud is unorthodox and conflicts with the beliefs of the Jewish Torah. A Eretz Israel is not God’s will.