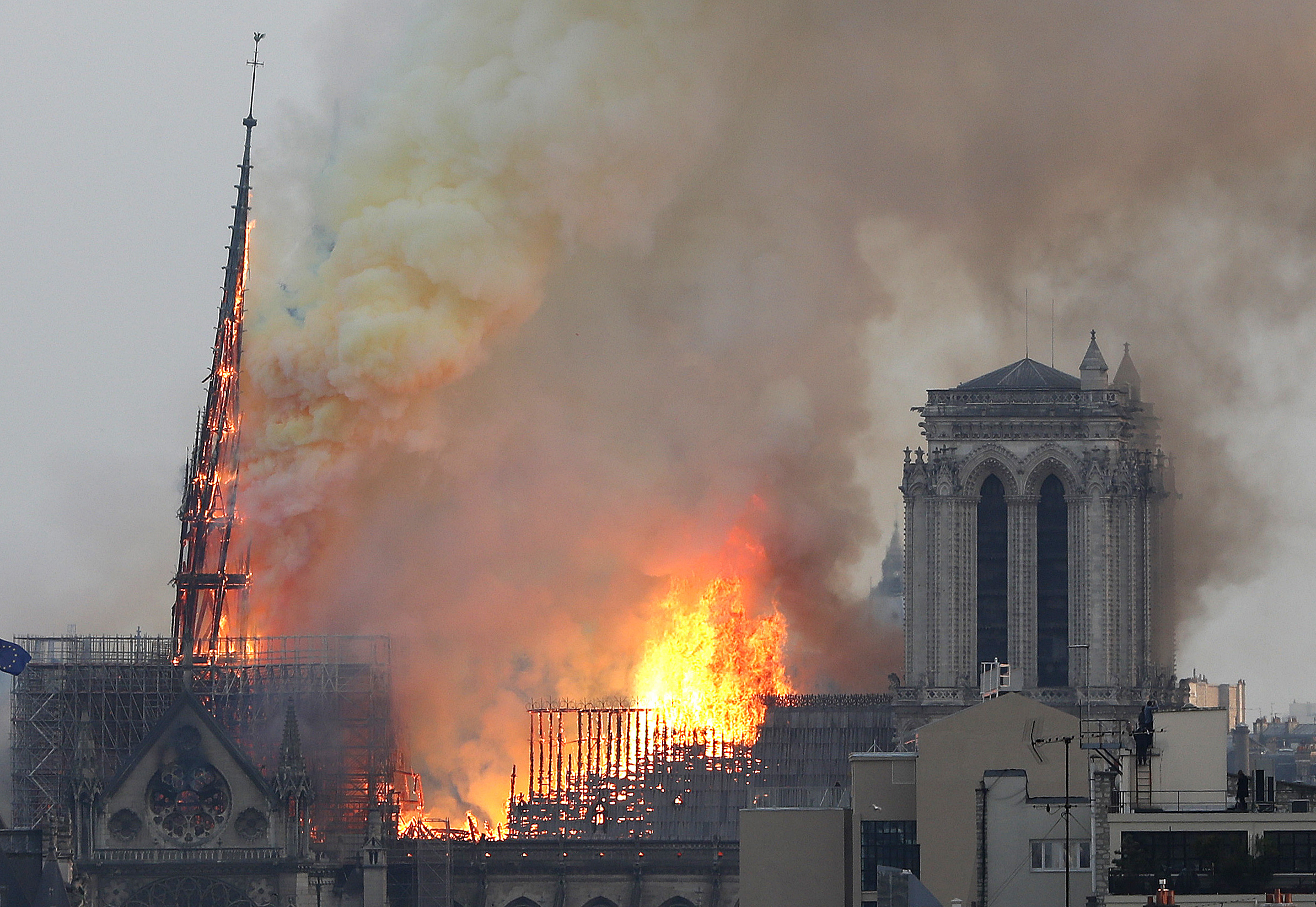 Flames rise from Notre Dame cathedral as it burns in Paris, Monday, April 15, 2019. Massive plumes of yellow brown smoke is filling the air above Notre Dame Cathedral and ash is falling on tourists and others around the island that marks the center of Paris. (AP Photo/Thibault Camus)

Robert Steele: Notre Dame Cathedral Burning a False Flag, with Complicity of the Pope, Organized by Macron, Merkel, and May, Each a Satanist, with Goal of Saving EU & Central Banks

I was  devastated by the total burning of Notre Dame cathedral, a place where I once prayed in thanks for one of my son’s who survived what might otherwise have been a certain death. The parallels to both the Reichstag Fire and 9/11 loomed. Then I heard from the shadow foreign minister of France and I believe all of the following to be true and an indictment of Macron, Merkel, May, and the Pope — Notre Dame would not have burned as it did without the explicit complicity of the Church — and key police, fire, and government offices in Paris — in detail, in advance, and into the future.

Here is what I have been told by a ranking source in France:

01 Canadian intelligence officers who went immediately to the site for a first hand look were prevented from getting close.

02 No electricity in the area where the fire is alleged to have started.

03 Two dead within the fire, both evidently murdered (two bullets each)

04 No helicopters brought in to fight the fire

05 Dysfunctional water spraying machine, a mockery of a fire-fighting performance

06 Official narrative pretending it was an accident was immediate and clearly on the shelf and ready to go.

07 Timing impossible to dismiss — intended to prevent announcement of Macron’s loss in the national debate inspired by the Yellow Vests.

08 Afternote A: anniversary of the Titanic that was precursor to the creation of Central Banks and the subversion of all governments.

09 Afternote B: This is intended to save the global financial system owned by the Satanists by saving the European  Election in May, anticipate a call for “financial solidarity” that keeps France trapped in Europe by “EU” agreeing to pay for the renovation of the cathedral.  “EU” and Central Banks are the beneficiaries of this false flag event, along with Macron as the token leader of France on behalf of the Satanic Deep State.

10 Afternote C: This is an intended “death blow” against Western Civilization. Although the Muslims are not being blamed, the sub-text is Frankfurt School / Tavestock Institute fundamental: whites and the West are shit,  hail all illegal immigrants, transgenders, and fat stupid people — the sheep of all sheep.

11 Afternote D: The roof of Notre Dame was original to the 13th century and has survived all wars, all manner of natural hazards. This was the single most precious asset in France, not so much a Catholic religious asset as a national spiritual cultural asset. Final conclusion: the Satanists are DESPERATE.

Separately I am told by sources in Asia with access to secret society leaders:

01 This was a Satanic Easter energy sacrifice by Satanists Macron, Merkel, and May, each believed to be an individual Satanist (and pedophile and sacrificer of children in ritual torture ceremonies). Each has their own major secular physical world failures pointing toward their Earthly demise.

02 This was assuredly done with the complicity of the Pope and the Catholic Church  hierarchy, the two dead may have been murdered because they would not comply with Satanic instructions. This was not an accident, this was an inside job with  outside (French national police) complicity in closing the area off and preventing effective responses from being coordinated. For the existing plan to blanket this sacred site with water to not have been executed instantly is the equivalent of Dick Cheney controlling NORAD on 9/11.

03 The coincidence of Steve Bannon setting up shop in an Italian monastery and calling the Pope an enemy with the timing and scope of the fire (total destruction) is considered just that — a coincidence.

04 The Pope’s incentive — apart from being a Satanist for whom God is the enemy and Notre Dame a lovely sacrifice to Satan — is said to revolve around the WikiLeaks dump and the exploding pedophilia scandal that if properly investigated would lead to every single cardinal and most bishops being defrocked, and the arrest of Assange, which has triggered the “dead hand” data dump and will lead to further deeply scandalous revelations about the Catholic Church in relation to Satanism, pedophilia, and financial crime.

UPDATE on Commercial Insurance Fraud.  Alert Reader sends in  this paragraph from the Daily Mail:

“Notre-Dame is owned by the state and has been at the centre of a years-long row between the nation and the Paris archdiocese over who should bear the brunt of costs for badly needed restoration work.”

Daily Mail: Twenty-three minutes that could have saved Notre Dame? Alarm was raised during mass at 6.20pm but staff could not find the fire until 6.43pm ….when the inferno was raging out of control

The “patsies” for the alleged “gross negligence are likely to be the restoration team, we look for them to be placed under investigation as a means of distracting the public from the real perpetrator, Macron & his Satanic allies.

If I was a betting man, my guess is this Notre Dame Cathedral fire was a “Kristolnacht” type of psyop event, similar to when the Nazis ignited the 1930’s fire and blamed the communists to win the election….my guess is this is similar, with Macron benefiting by shutting down the yellow vest protests (which have been destroying him and putting France in civil war. Who benefits from the fire? well perhaps Israeli Mossad and/or Shin-bet doubling-down on their “religious war” between Muslims and Chrisitians as may have been the case in the “Chr*st-Ch_rch” NZ event and the fake video of the guy running around like he’s in a video game with fake weapons, etc. A renewed religious war is always good for the military industrial complex. Perhaps they might even try and blame it on Iran–but most likely would have been MEK if it was anyone, working with MI6-CIA. Just another day in the police-state.

Notre Dame Cathedral in Paris on Fire, Worker Claims it Was “Deliberately” Started

The official story [Credible false flag reports are being censored]:

“There is to be a particular insult, which will be inflicted upon My Holy Name, in an effort to desecrate Me, during Holy Week. This wicked gesture, during Holy Week, will be seen by those who keep their eyes open and this will be one of the signs by which you will know that the imposter, who sits on the throne in My Church on earth, does not come from Me.”

STATE OF THE NATION: NOTRE DAME CONFLAGRATION: Gladio Strikes at the Heart of Paris and Soul of the French People