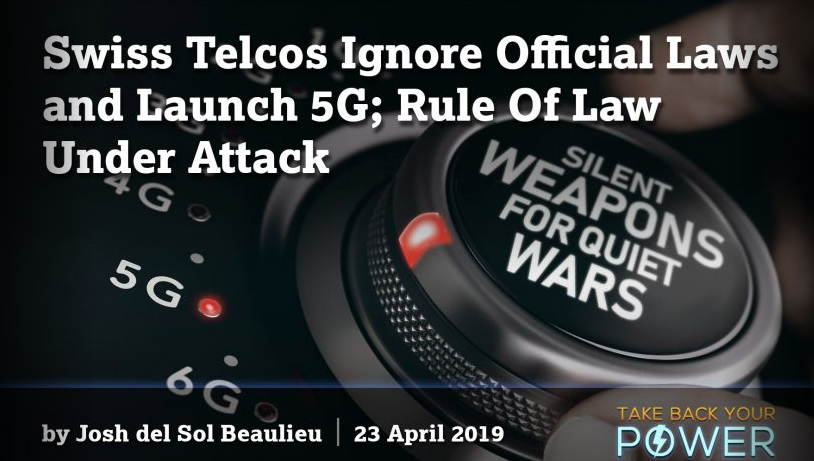 With so many dominoes starting to fall where people don’t want 5G, one had to expect the foundational Rule of Law would be tested.

In the past month, official resolutions against 5G have been adopted by the cantons of Geneva, Vaud, Jura and Neuchâtel in Switzerland. These are the first four Swiss regions to pass ordinances against 5G installation (see chart below), comprising 1.5 million people (18.1% of national population).

Despite that, the majority state-owned Swisscom defied these laws on April 17, when they activated 5G stations in 102 locations in Switzerland, including Basel, Bern, Chur, Davos, Geneva, Lausanne (Vaud) and Zurich. They did so by upgrading existing antennas installed for previous generations of wireless technology.

“Under Swisscom’s plans, more than 90 percent of the population will be covered by the end of 2019,” said the company in its statement. …

One of the core concerns is the number of extra antennas that will needed – 5G can only transmit short distances – one reportedly every 10 to 12 metres. …

Experts are urging the EU to follow Resolution 1815 of the Council of Europe, asking for an independent task force to reassess the health effects of 5G.

Swisscom meanwhile is urging Switzerland to relax environmental laws which it claims are an impediment to rolling out 5G.

It is important to comprehend the gravity of the situation.

If a law prevents a company from deploying their agenda because of harm to others, but the company does it anyway — and somehow the company and its executives escape immediate judicial or police action — then the Rule of Law is no longer in effect.

The body of independent science, on 5G’s millimeter-wave and microwave radiation, is conclusive: these frequencies harm humans and all life. [see additional links to the science at bottom]

And the wireless industry does not have one single study indicating that 5G is safe.

It is deeply ironic that within a nation historically recognized for its higher-minded values to not engage in war, wireless companies have now effectively declared war on all people living in this nation, by deploying 5G against consent and directly in violation of both official moratoria and independent science.

Because there are no studies indicating safety, these acts of 5G deployment against consent — in Switzerland and everywhere 5G is being deployed — also directly violate the Nuremberg Code, which states that one’s informed consent is absolutely necessary prior to any human experimentation.

Though, one truly begins to wonder if indeed this is experimentation, as such. One could make a very strong case that those behind 5G know exactly what they are doing to human biological health, since there were already 2300 studies on wireless compiled by military researchers in the 1970s.

So, in the guise of profit, progress and competition, a weapon is being deployed against all of us — whether it’s intended as such, or not. The science on this is clear.

What’s more: 5G is even intended to operate with beam-forming applications on the same frequency ranges used by military crowd-control weaponry.

And these studies identified many of the “mystery” symptoms of the chronic, germless epidemics and neurological conditions which see exponentially increasing today.

The inescapable truth is that the deployment of the innocently-named “5G” is a silent declaration of a quiet war against humanity.

As such, we must continue to increase our resolve and numbers, as we responsibly come together and address the root of the problem.

Henry Dunant, the Swiss humanitarian and Red Cross founder, whose memoir of the battle of Solferinoeventually led to the drafting of the Geneva Conventions of 12 August 1949 and protocols, would be turning in his grave. For at least 5 percent of the world population has already been wounded and sickened by previous generations of wireless technology unleashed upon the world without safety testing.

And those 5% are just those who have come to realizethat their symptoms are related to wireless radiation exposure.

In light of everything you just read, would it not be appropriate to consider deployments of 5G as criminal acts of war upon humanity?

And would it not be just to address the corporate perpetrators, who are shattering these most basic codes of ethics, as criminals who must be held to account?

And would it not be wise to call all legislators into solidarity and accountability — in this, most human of causes — to protect the people, or else become liable themselves for criminal negligence?

The Swiss people are organizing quickly in groups, such as this and this. In the USA, groups are forming for a May 15 Day of Action on 5G. See below for a list of grassroots groups.

There are hundreds of organizations popping up everywhere. Here are several: