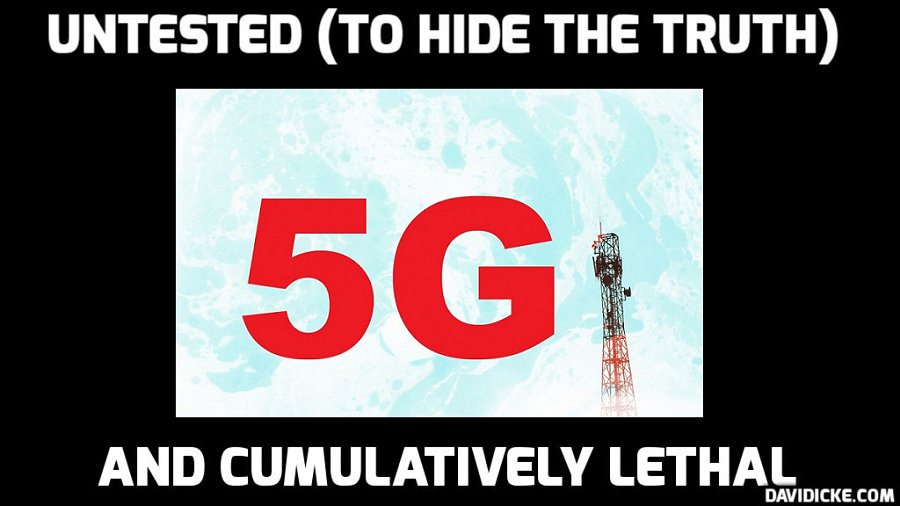 “ONLY A SERIOUS LEGAL CHALLENGE
CAN IMMEDIATELY SUSPEND THE
CATASTROPHIC DEPLOYMENT OF 5G!” “Let’s see them square off with a phalanx of personal injury attorneys and cadre of environmental lawyers who will be marshalling through a $1 Trillion Class Action Lawsuit.”

That Big Telecom in tandem with government officials really thought they could get way with the 5G roll-out is the greatest example of raw hubris and unfettered arrogance ever displayed in broad daylight.

Truly, that the vested corporate interests along with their enabling governmental representatives attempted to arrogate such sweeping powers unto themselves reflects an extraordinary level of endemic corruption and serial criminality.

The chutzpah and recklessness and audacity and insanity associated with the ongoing nationwide roll-out of 5G exceeds anything ever seen in the history of the United States of America.

“THE 5G ROLL-OUT HAS NOT EVEN BEEN APPROVED BY THE AMERICAN PEOPLE; NOR HAS IT BEEN PROPERLY EVALUATED BY GOVERNMENT OR STUDIED BY QUALIFIED SCIENTISTS WITHIN THE IT, WIFI AND TELECOMMUNICATIONS INDUSTRIES.”

(Source: 5G ROLL-OUT: An Ongoing National Emergency that Requires an Immediate Shutdown by the American People)

Of course, the biggest concern about what is essentially a military deployment of 5G is that it represents “The Greatest Public Health Disaster in US History”.

A Clear Violation of Everything

Lest the reader wonder exactly what the legitimate legal basis is for this $1 Trillion Class Action Lawsuit being filed to terminate 5G, please consider the following indisputable points of fact.

The very essence of the 5G roll-out, as well as the manner in which 5G is currently being deployed across the USA, are patently illegal, unlawful and illicit according to many generally accepted legal principles and standards.

This extremely dangerous interstate deployment of 5G is being conducted in such a way that it clearly violates the U.S. Constitution as well as various federal laws, state statutes, county codes and city ordinances.  Such an inherently harmful power grid also transgresses international law, natural law, universal law, divine law and scriptural law.

KEY POINT: WORLD HEALTH ORGANIZATION: Why is the UN’s health watchdog allowing humanity’s health to be put in such great danger with 5G and other EMF assaults?

The foisting of 5G digital cellular networks on cities and communities throughout the United States is likewise a clear violation of human rights, civil rights, constitutional rights and natural rights.

In other words, 5G in it’s current form is a “A Clear Violation of Everything”!

Therefore, those individuals and institutions which have attempted to shoehorn this exceedingly destructive technology paradigm into communities will eventually be prosecuted to the fullest extent of the law.

What follows is a statewide initiative that can be taken in any state as a first step to holding the perps in government accountable.  Remember, were it not for utterly corrupt elected representatives and government officials, the 5G rollout could never have been advanced so quickly and stealthily.

Perhaps the quickest way to bring this 5G government-corporate juggernaut to a screeching halt is to do so with a binding federal injunction.

This necessary legal process can be carried out in a number of ways, but the best is to bring an emergency legal action which can be quickly heard by the U.S. Supreme Court. Similar lawsuits can also be filed on a state-by-state basis where a single victory can set a strong precedent for the rest of the nation.

However, it is the various threats (in the form of enormous legal and financial liability) contained in a $1 Trillion Class Action Lawsuit that is the most effective way of rapidly chilling the economic and financial forces that are behind the out-of-control 5G freight train.

For it is the stratospheric revenue projections that are associated with both the 5G roll-out and build-out of the Internet of Things (IoT) that have really created this devastating juggernaut to proceed without constraint or proper review.

Therefore, were the moneyed vested interests and major potential investors to understand that their 5G investments could go up in smoke, they would quickly tamp down their wild-eyed enthusiasm.

Herein lies the method for arresting the 5G roll-out in those cities already targeted by the Big Telecom companies which are determined to put 5G in place without an iota of informed consent. See: 5G GENOCIDE: The Most Lethal NWO Conspiracy of the Third Millennium

When the corporate attorneys grasp the sheer enormity and profundity of the upcoming $1 Trillion Class Action Lawsuit, they will immediately recommend to senior management and board of directors that all 5G deployment operations cease and desist post-haste.

It doesn’t get any better than this legal wrench thrown right into the gears of the 5G juggernaut … where it will remain until the criminally insane psychopaths who advanced the project this far can be arrested, prosecuted and incarcerated for life.

Each and every corporate officer and government official who has conspired to execute this ongoing crime spree must be held to account or else they will be emboldened to try it again. Severe deterrence is the only sure way to scare these truly predatory capitalists and governmental corruptocrats straight.  Throwing a good number of the co-conspirators in prison would set an example for the rest of the world as well, especially wherever 5G gangsters are running their “Let’s fry humanity!” game.

No one is ready for the tsunami of Fifth Generation (5G) radiation that has been unleashed by the Federal Communications Commission, whose only health concern is whether or not 5G will “heat-up” human skin past a certain degree.

Only when 5G is “cooking” human beings will the FCC and the Health and Human Services consider any negative health effects of this new generation of “beyond microwave” 5G millimeter (milli-wave) radiation that will be beamed from 300,000 new cell phone towers in every US community – coming to the utility pole near you. Perhaps the FCC should put their collective heads into a microwave oven, turn it on, and then say that microwaves and milli-waves are harmless.
(Source: 5G: The Most Dangerous Technological Development of the Millennium)

The most meaningful aspect of filing this $1 Trillion Class Action Lawsuit is that the discovery process will reveal the extent to which so many laws have been outright broken, statutes violated, codes ignored, rules skirted, regulation circumvented, etc.

The fear of so much exposure, alone, will so frighten the 5G movers and shakers that they will scatter like rats fleeing the sinking 5G ship.

Big Telecom, and all the other related industries that hope to gain from this epic crime wave, will vacate the 5G premises so fast so as not to lose their current licenses, certifications and registries necessary to operate in their respective regulated industries.

The bottom line here is that there is a massive criminal conspiracy that has permitted this highly illegitimate enterprise from getting this far.  And, it’s about to be blown wide open.

How exactly things developed to this point of implementation must be investigated so as to preclude a repeat assault on the American people.

Highly destructive and deadly schemes like the 5G roll-out simply never should have made it this far! See ULTRA-SOS: 5G Roll-out Seriously Endangers Every Person on Planet Earth

*This post is the first installment of a 3-part series of this unfolding $1 Trillion Class Action Lawsuit; please check back for further developments.

BOYCOTT the companies listed in this “5G perpetrators” exposé

5G EMF & Microwave Radiation: How folks can protect themselves where the roll-out is occurring

Every concerned citizen is highly encouraged to disseminate the link posted below to the political, legal and judicial class throughout American society.  The volumes of hard scientific evidence regarding 5G-caused medical ailments and health conditions is so conclusive that any sound legal initiative is certain to be successful.  By widely circulating this excellent article, those in the U.S. Civil and Criminal Justice Systems will become acutely aware of what a legal disaster 5G will create—EVERYWHERE IT’S DEPLOYED.  In this way we all can fertilize the soil for the planned $1 Trillion Class Action Lawsuit.