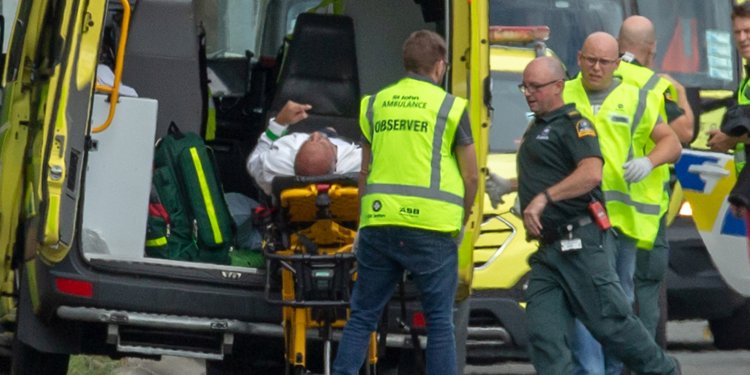 odd modifications, no flash suppressor, strange stock, none of which is required by New Zealand law….we have never seen a weapon like this…piece of junk

We have an “OP” going on. Same day, the fake website “The Intercept” called for the ICC to prosecute President Assad, the savior of the Syrian people, as a “war criminal.” We had been waiting for their fake criticism of Israel to turn around, now that Israel faces full complicity for training and arming the Jewish shooter in New Zealand.

Start watching, roaches are streaming out of the woodwork on this one. Confirmed, Glenn Greenwald is pure Mossad and this makes Snowden as big a fake as Israeli trained Julian Assange. The Intercept, powerfully funded, was being closely watched. We knew it was too good to be true.

There are multiple confirmation of advance notification and involvement by members of the New Zealand police authority who belong to Freemasonry.  This is identical to the Norway shooting under Anders Brevik, which was also a Freemason “sponsored” event.  As you remember, Brevik was allowe to buy fertilizer, own an assault rifle, attend training with neo-Nazi and pro-Zionist (now one in the same) organizations in Europe, which our “caught” shooter, Brenton Tarrant has done also.

ROBERT STEELE: For those who do not know me, I am a former US spy and I ran a false flag operation for CIA in the 1980’s. I spoke with Gordon Duff about this and with his permission have posted a full replay of his original article. I am not going to spend any time on this, it is very clearly a mind-controlled false flag operation with complete local complicity. I hesitate to speculate on the insanity of all of this, other than to note that I fully anticipate Syria making good on its declared plans to retake the Golan Heights illegally occupied by Israel (as Palestine is illegally occupied by Israel).  The US Government is in enemy hands — from Pompeo and Bolton to King Kushner, our President’s ability to control the forces that want all out war between the Zionists and the Muslims — the long planned WWIII — is questionable. Our President has the right instincts. He knows in his heart that he need to back out of the Middle East now, conclude the Koreas deal, and later return to insist on the denuclearization of Israel as well as Saudi Arabia  and iran. In the meantime, my bottom line is simple: as long as Jared Kushner and John Bolton are officially employed in t he White House, the US Government is in enemy hands. It’s time for a new Secretary of State (Jon Huntsman has my vote) and a proper Secretary of Defense with combat experience who is not a rabid Zionist or dual citizen or contractor.

The Zionists did 9/11 (and before that the USS Liberty and in between the assassination of JFK Jr. to clear the way for Hillary Clinton). This is a crucible moment for our President, who is alone.  The US secret intelligence community is not only worthless, it is unlikely to have the integrity to tell the President what I and Gordon and perhaps Mike Flynn would tell him if we could: this was a Zionist state-sponsored false flag that should be called out for what it is, and the Embassy of Israel in the USA closed down for this atrocity.  “Enough already!”

CENSORED BY GOOGLE NEWS: Robert Steele with Javad Heirannia: Is Zionism in the USA Over? One Former Spy & Counterintelligence Officer Says Yes.

RELATED (Tip of the Hat to Owl):

UPDATE 2: 14 Reasons This Was a Mossad Operation

BREAKING Mongoose: 14 Reasons Why the New Zealand Mosque Attack Could Be a ‘False-Flag’ Mossad Operation

Although dated (2011), this excellent story makes clear the promiscuous activity of the Mossad in New Zealand, and brings forth the high probability that the New Zealand police in particular are totally compromised (both technically and criminally).

New Zealand: The Unraveling of an Israeli Mass Murder?

So, where are we? We have a second shooter and guns there, strange video with “pre-killed” victims. We have silenced witnesses and banned videos.

We have money from heaven, training in Israel, time spent in Syria and in and out of Turkey, we have a trained assassin pretending to be a world tourist with no photos, no video, no social media, no friends, no school chums, no neighbors and a British/Scottish background achieved when his Jewish family immigrated to the UK from Palestine/Israel in 1948.

We have a bit too much lying. And so it goes.

Police speculated during the attacks that there were up to three suspects. But footage and photos that have emerged along with early reports of other suspected locations where incidents occurred indicates that the number of attackers was likely larger.

There were also rumors of other incidents which suggest that the attack might have been larger than is being disclosed. Maori News noted reports that an additional shooting was ongoing at Christchurch Hospital. This went largely unacknowledged by the international media. In the aftermath of the attacks, police in Auckland, New Zealand also responded to a bomb scare at Auckland train station.

It is also worth noting that the location of police stations in and around Christchurch shows that there were several just a few blocks away from the Al Noor Mosque and Linwood Islamic Centre. This is about a seven to eight minute drive with normal traffic. But witness statements say that police took over 20 minutes to arrive at the scene (the police response time was actually an even longer 36 minutes). Ambulance services took over half an hour to arrive at the scene despite the fact that hospitals were in even closer proximity to the attack locations than police stations.

New Zealand government has engaged in unprecedented censorship of the event and videos of the incident have all been taken offline.

New Zealand mosque ‘shooter’ visited Israel in 2016, the same year
Netanyahu threatened the New Zealand Govt. for supporting the
Palestinians at the UN.