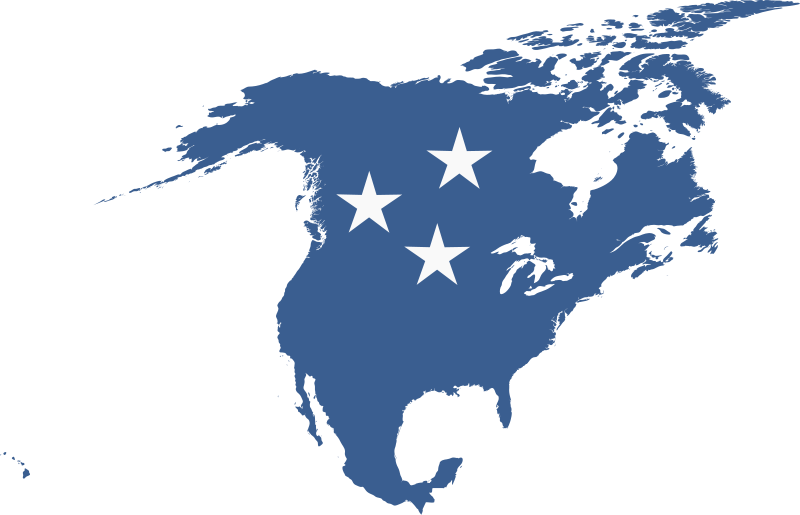 The U.S. Chamber of Commerce, a corporate member of the world-government-promoting Council on Foreign Relations (CFR), has launched a massive new lobbying effort called the USMCA Coalition to garner congressional and public support for the United States-Mexico-Canada Agreement integration scheme.

“Over the coming weeks and months, the USMCA Coalition will make the case for expeditious passage of the agreement to members of Congress, and it will work to educate the American public about the benefits of the new deal,” the Chamber of Commerce stated in its February 26 press release announcing the launch of the new coalition. “The effort will harness the advocacy strength of a broad membership of companies, trade associations, and chambers of commerce, including many that operate outside of Washington, D.C.”

“Over the coming weeks and months, the USMCA Coalition will make the case for expeditious passage of the agreement to members of Congress, and it will work to educate the American public about the benefits of the new deal,” the Chamber of Commerce stated in its February 26 press release announcing the launch of the new coalition. “The effort will harness the advocacy strength of a broad membership of companies, trade associations, and chambers of commerce, including many that operate outside of Washington, D.C.”

The USMCA Coalition is composed over “200 companies and associations representing farmers and ranchers, manufacturers, service providers, and technology companies” led by the Chamber of Commerce. However, on the USMCA Coalition’s website only 84 “Company Members” were listed. Of those 84 company members listed, the following 14 are also corporate members of the CFR:

The press release also quoted Devry Boughner Vorwerk, the corporate vice president of Cargill, Incorporated and co-chair of the USMCA Coalition, saying, “The United States, Mexico and Canada have been transformed by nearly 25 years of open agricultural trade, creating a level of economic integration that has made North America one of the world’s most competitive and successful trading blocs.” (Emphasis added.) And that is exactly what the USMCA is all about — “trading blocs.”

Vorwerk’s comments underscore the USMCA’s importance to the CFR and other promoters of global government who seek “economic integration” of North America into a “trading bloc” similar to the European Union. Rather than 195 countries, as they presently exist, each having its own government and economy, the goal is for there to be only a handful of regional (and in some cases overlapping) supranational union-states. These can best be observed today in forms of such regional trading blocs as the EU, African Economic Community, Mercosur, Eurasian Economic Union, ASEAN–China Free Trade Area, Comprehensive Agreement on Trans-Pacific Partnership (CPTPP), and NAFTA.

In fact, NAFTA’s true place in this proposed world arrangement was admitted by former Secretary of State Henry Kissinger, a leading globalist and member of the CFR’s board of directors, in an op-ed piece published in both the Los Angeles Times and the Washington Post on July 20, 1993. About the then-proposed NAFTA, Kissinger wrote, “The revolution sweeping the Western Hemisphere can point the way to an international order based on cooperation. It is this revolution that is at stake in the ratification of NAFTA. What Congress will soon have before it is not a conventional trade agreement but the hopeful architecture of a new international system.”

Defining what he meant by “new international system,” Kissinger further wrote: “A regional Western Hemisphere Organization dedicated to democracy and free trade would be a first step toward the new world order that is so frequently cited but so rarely implemented.” (Emphasis added.)

This “new world order,” as advocated by Kissinger and many in the CFR, is one in which national sovereignty and nation-states would be replaced with a new international system made up of “competing,” yet interconnected, trading blocs or regional unions. Like plasma, it is a transitory state toward the solidification of one world government. By default, it is the end of nationhood, patriotism, and Americanism.

Organizations dedicated to the preservation of American sovereignty, such as The John Birch Society, the parent organization of The New American, are not opposed to trade and commerce in their classical liberal sense, nor do they advocate a policy of isolationism. America has never been an isolationist country. Even during eras of high tariffs, in America’s past, such as during the 1830s (when U.S. tariffs on imported goods reached their highest at 62 percent on dutiable imports), between the 1860s and 1900s (when the average tariff was about 45-percent), and between 1920 and 1932 (when tariffs reached as high as 59-percent in 1932), America still traded with other countries. This is not to suggest that the average tariffs on imported goods should be subject to over 45-percent. Instead, Congress should embrace a smart tariff, one that is flexible and adjusts to satisfy the demands of both domestic consumers and manufactures while also not impairing our domestic access to extracting strategic raw minerals and metals that would be vital during a time of war. Tariffs are also far less intrusive than a progressive individual income tax.

A World Without Tariffs

The perpetual drive toward zero tariffs commenced with the Trade Agreements Act of 1934 and was followed by America’s subsequent entry into both the General Agreements on Tariffs and Trade (GATT) by executive decree in 1947 and then to the World Trade Organization in 1995. This drive has placed a greater reliance on domestic income taxes or debt (either to the Federal Reserve, which loans the money that it creates to the U.S. government on interest, or to foreign countries such as Communist China to whom the United States currently owes $1.12 trillion) in order to finance the federal government and its ever-growing laundry list of unconstitutional big spending projects and programs.

Zero tariffs, as desired by the advocates of world trade and world government, would harm small businesses unable to compete with large multinational corporations that largely benefit from WTO-approved free trade agreements and that are also CFR corporate members (such as ExxonMobil, Chevron, Goldman Sachs, Pepsico, Boeing, Walmart, and Johnson & Johnson, just to name a few).

No tariffs would also compromise U.S. national security with cheap foreign-made steel, aluminum, and other vital metals. The modern international relations theory of “free trade breeding world peace” is predicated on the notion of interdependence — the very cornerstone for the establishment of a one world economy and government, or new world order.

This is why the USMCA is so crucial to both Chamber of Commerce and the Council on Foreign Relations; not only does the USMCA “reafirm the importance of the economic integration of North America” (as then-Mexican President Enrique Peña Nieto touted at the USMCA signing ceremonyin Buenos Aires, Argentina), it’s also a stepping stone and pillar for their emerging new world order.

Richard N. Haass, the president of the CFR and author of the book A World in Disarray, which unabashedly promotes the new world order or “world order 2.0,” as he dubbed it, tweeted his enthusiasm for the USMCA, following the initial release of the text. “The USMCA looks to be the trade pact formerly known as NAFTA plus 10-20%.” Haass said on Twitter. The next day, Haass followed up with another glowing endorsement. “USMCA is NAFTA plus TPP plus a few tweaks. Whatever … if @realDonaldTrump and the Congress are now prepared to embrace a pro-trade agenda, it is all to the good,” Haass tweeted. “Ideally, US participation in TPP by another name would be next; failing that, a US-Japan FTA would be second best.”

The Chamber of Commerce’s press release also quoted Candi Wolff, the executive vice president for global government affairs at Citi and also a co-chair for the USMCA Coalition. “USMCA has key improvements for the services sector, including a modernized financial services chapter that for the first time prohibits data localization requirements in the region,” Wolff said. Further stating, “It’s critical that new trade agreements account for the fact that 75% of jobs in the private sector in the U.S. are now in services, and USMCA does that.”

Citi is the largest bank in the United States and is one of the Big Four banks, which also include JP Morgan Chase, Bank of America, and Wells Fargo — all four of which are corporate members of the CFR.

In May 2005, the CFR, in conjunction with the Canadian Council of Chief Executives and the Consejo Mexicano de Asuntos Internacionales (Mexican Council on International Affairs), published a report entitled “Building a North American Community.” The controversial 175-page report was produced by a self-styled “Independent Task Force” chaired by the late Robert Pastor, regarded as the “Father of the North American Union” and a former professor of international relations at American University. Pastor wrote extensively about the need to integrate North America even more than what NAFTA could offer. Of this proposed “North American Community,”page 3 of the report stated:

Its boundaries will be defined by a common external tariff and an outer security perimeter within which the movement of people, products, and capital will be legal, orderly, and safe. Its goal will be to guarantee a free, secure, just, and prosperous North America.

In other words, replace NAFTA with a kind of EU-Lite. Its other recommendations included: the harmonization of visa requirements; the development of a North American Border Pass with biometric identifiers, which is observable today in the form of the Western Hemisphere Travel Initiative-compliant passport card and enhanced driver licenses for land and sea travel within North America (not yet approved for air travel); sharing data about the entry and exit of foreign nationals; harmonizing entry screening and tracking procedures for people, goods, and vessels; law-enforcement cooperation across all three countries; enhancing the current North American Development Bank; and the establishment of a North American Investment Fund to “encourage private capital flow into Mexico.”

Before passing away, Pastor credited The John Birch Society for having killed his globalist ambitions for an EU-style North America. Prior to Pastor’s death, The John Birch Society had led successful campaigns exposing and stopping both President Bill Clinton’s proposed Free Trade Area of America (FTAA), which would have extended NAFTA beyond North America to the entire Western Hemisphere (except Cuba), and President George W. Bush’s proposed Security and Prosperity Partnership of North America (SPP), which would have included many of the recommendations proposed in the CFR’s task force report.

The same globalists who pushed for the FTAA and SPP are the same ones now backing the USMCA, and they do not want a repeat of those results. This is why the Chamber of Commerce has created the USMCA Coalition; its main objective is to serve as a propaganda drive for the USMCA. The USMCA Coalition is their biggest lobbying effort.

Meanwhile, Congress is currently waiting on a report from the U.S. International Trade Commission (ITC) about the USMCA’s expected impact on the economy before formally introducing a USMCA Implementation Act. The ITC’s report was originally expected to be completed in March. However the deadline was extended, due to the temporary partial government shutdown. The ITC report is now slated to come in around April 20, 2019.

The Chamber of Commerce’s USMCA Coalition and other efforts by the CFR to promote this new North American integration scheme underscore the urgency for patriotic Americans, who love their country and are zealous for its national sovereignty and independence, to urge Congress to both withdraw from NAFTA and to stop the USMCA.

In fact, The John Birch Society has launched an action project called “Get US Out! of NAFTA & Stop the USMCA,” which as its title suggests, is intended to accomplish just that and in-turn eliminating the blueprint and framework for a “North American Community,” as proposed by the CFR. Concerned citizens should consider joining The John Birch Society and taking part in its action project to help save American liberty and independence.