Is there any country whose gold hasn’t been stolen by London? 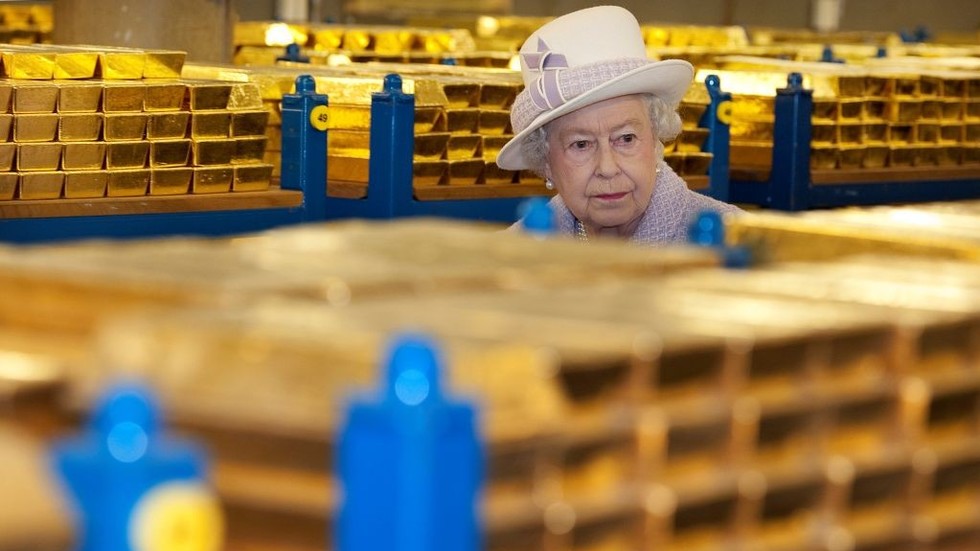 Britain’s Queen Elizabeth tours a gold vault during a visit to the Bank of England, 2012 © Reuters / Eddie Mulholland

Is there any country whose gold hasn’t been stolen by London?

Geopolitical and trade tensions along with US sanctions have shaken trust in the US dollar over recent years. As a result, a number of global central banks have been boosting their national reserves of gold bullion

In 2018, world central banks added 651.5 tons to official gold reserves, as a greater pool of regulators turned to the precious metal as a diversifier, according to data released by the World Gold Council. Some countries, like Russia and Turkey increased their gold reserves while dumping US dollar holdings at the same time. India, China, Kazakhstan, Iraq, Poland and Hungary were among the other big purchasers of the yellow metal.

While some countries opt to hold their bullion reserves domestically, others still trust their precious reserves to the central banks of other nations. Vaults in Paris, New York and London have become popular gold storages for many developing countries.Net sales of gold from central banks reportedly remained insignificant, totaling less than 15 tons with Australia, Germany, Sri Lanka, Indonesia and Ukraine accounting for almost the entire figure.

The Bank of England has kept a reported 80 tons of Australian gold for years. However, the UK regulator has not allowed Australia to carry out a proper audit of its bullion holdings. In an attempt to find out what happened to Australia’s gold RT talked to Ronan Manly, a precious metals analyst with BullionStar in Singapore.

“There have never been any independent physical audits of this gold, which means that there is no way to verify the RBA’s claim that it has all the gold it claims to have,” Manly told RT.The Reserve Bank of Australia (RBA) claims to have 80 tons of the precious metal. Nearly all of the country’s gold bars are reportedly stored in a bailment arrangement, in an allocated gold account, at the Bank of England vaults in London, with a very small amount of gold stored at the RBA headquarters in Sydney. However, there are questions whether the gold is still there, according to Manly.

The latest, partial, audit of Australia’s gold holdings was reportedly conducted in 2013, but the results of the checking have never been released neither by the Bank of England nor by the RBA, with a freedom of information request for the findings and the final report denied by both.

“Throughout the last 20 years, the RBA also admits that a lot of its claimed gold holdings have been lent out in the secretive London Gold Lending Market, but there is no information whatsoever available on any of these lending transactions or the bar numbers involved,” Manly said.

The RBA participated in the gold lending market at times lending almost all of its gold holdings for over 30 years, according to the regulator. The lending activity has reportedly deteriorated over the past decade. Earnings from gold loans amounted to just $0.71 million during the last financial year.“That the RBA and Bank of England refuse to do any of these things is highly suspicious. Therefore, there is no way to say that the RBA has the 80 tons of gold it claims to have.”

According to Manly, providing the documents on the latest audit of the holding “would, or could reasonably be expected to, cause damage to” good relations between the Bank of England and the RBA.

“The rationale claimed by the RBA that it stores its gold in London so as to be in proximity to the London Gold Trading market is also wearing thin given that the Bank of England has now confiscated the gold of Venezuela’s central bank, the Banco Central do Venezuela,” the analyst pointed out.According to Manly, the Australian government should reconsider its approach to the national gold holdings, as the country’s gold industry and infrastructure is perfectly good for storing and handling its precious metal on its own territory. The RBA could easily store the gold in Canberra, Sydney or Perth like the Bank of Russia’s gold is held in Moscow and St Petersburg.

“This is sovereign gold of another nation which was placed into custody storage by a foreign central bank. It is also absolutely extraordinary that the Bank of England has succumbed to US Government and State Department bullying to use,” said Manly, referring to the refusal by the Bank of England to return Venezuela’s gold.