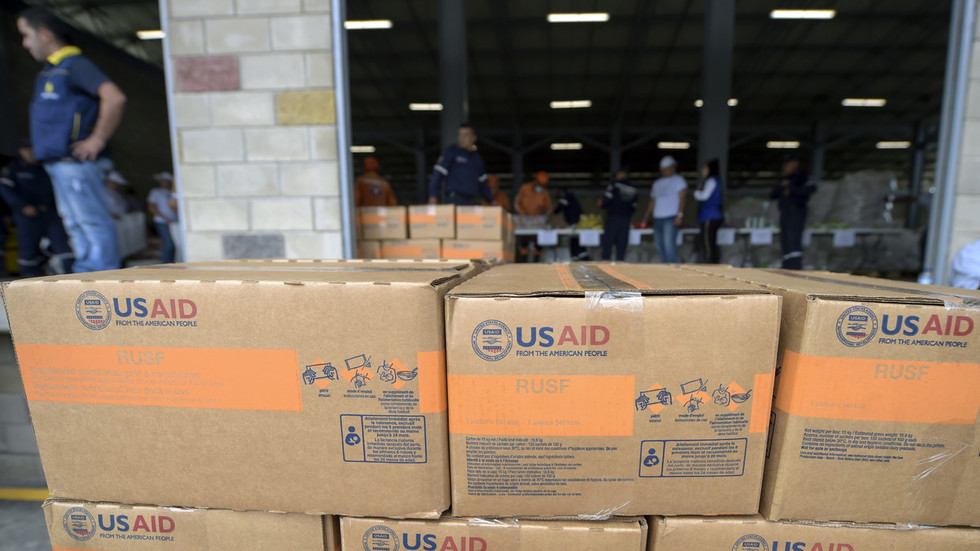 Boxes with US humanitarian aid are seen in Cucuta, Colombia, on the border with Venezuela, on February 8, 2019. © AFP / Raul Arboleda

Washington’s decision to send aid to Venezuela now is pure hypocrisy as it was the US that caused the nation’s economic woes with its sanctions, Vice President Delcy Rodriguez told RT. She believes the aid foreshadows an invasion.

The US seeks to create conditions that would allow it to invade Venezuela, Rodriguez said, slamming Washington for the decision to send humanitarian aid at the request of the opposition leader and self-proclaimed interim president, Juan Guaido.

It's OK for US to interfere in Venezuela… it's for a good cause… Right? pic.twitter.com/noeDDuyk13

Washington seeks to present a distorted view of the situation in Venezuela to create a “false positive” impression about its own policies against Caracas, the vice president said, adding that, although the nation does struggle with social and economic problems, it does not suffer from a full-scale humanitarian crisis and by no means requires any help from Washington.

“This [humanitarian assistance] is a big lie,” she said, adding that Venezuela’s social “wounds” were the result of the US economic “blockade.” What Venezuela does need is a national dialog between the government and the opposition – something that she says the US actively impedes.

“Washington believes that [Venezuelan President] Nicolas Maduro should go. Washington’s response is its distorted doctrine of regime change [in] democratic nations that do not like it when someone twists their arms and forcibly interferes into their internal affairs,” Rodriguez explained.“We say: ‘yes to dialog’ and ‘no to war’,” Rodriguez said, adding that her country has been facing “total political and ideological rejection” by the US and some of its allies. She also accused Washington of directly “giving orders” to the opposition led by Guaido.

Meanwhile in the world of freedom and democracy: US ‘kindly advises’ #Maduro to leave #Venezuela pic.twitter.com/eYwzKpt610

Washington would be wrong to believe that it still “rules the world,” Rodriguez said, adding that an increasing number of nations seek to establish a multipolar system of international relations.

Her words came less than a day after Guaido told AFP he could potentially “authorize” a foreign military intervention to topple the elected president Maduro. Over the last two weeks, the US administration also made it clear that the military option is not off the table if Maduro refuses to voluntarily surrender his power and launch a ‘democratic’political transition in Venezuela.

Meanwhile, both Guaido and his backers in Washington urged the Venezuelan officers to defect and support the opposition. However, the army has remained overwhelmingly loyal to Maduro.

As Venezuela continues to struggle with an economic crisis and hyperinflation, Guaido, who has been recognized by the US, its regional allies in South America, as well as several western nations, has called on his international support base to send humanitarian aid. The US promptly complied with this request but the convoy was stopped at Venezuela’s border with Colombia as Maduro refused to let it in.The Venezuelan president has repeatedly called for dialog and invited the opposition to the negotiations table, but his proposals have been rejected while Washington claimed that the time for negotiations has long passed.

US intervention in #Venezuela will be a ‘much worse #Vietnam than you could imagine’ – #Maduro https://t.co/wMVrD7NfaF

This development further escalated tensions in the Latin American country as Guaido called on his supporters to continue protests until the ‘usurper’ Maduro lets the convoy in. Meanwhile, Venezuela’s Supreme Court judge in turn accused the opposition leader of an attempt to usurp presidential powers.