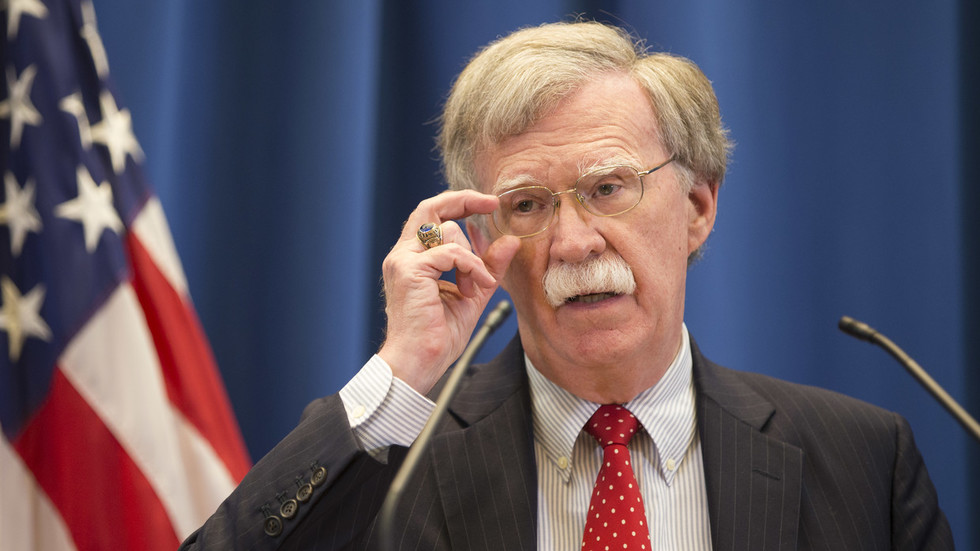 “Whom the gods would destroy they first make mad,” are words delivered to us from history. When contemplating them today John Bolton springs to mind.

All joking aside, Trump’s national security adviser is to international diplomacy what the Hunchback of Notre Dame was to Pilates. Though reports that he is regularly driven to his office in Washington on the back of a cruise missile are yet to be confirmed, his near orgasmic exaltation of US hard power and military might suggest he would relish nothing more.

In other words, in John Bolton the world has itself an unrepentant and unreconstructed neocon. A fanatical warmonger who is now, to all intents, Donald Trump’s brain.

Afraid? You should be.

The recent picture of Trump’s national security adviser holding a writing pad, upon which the words “5,000 troops to Colombia” were scrawled, is all the evidence needed of the global calamity that is US hegemony and domination. It is not so much the ability of proponents of American exceptionalism, such as Mr Bolton, to deploy thousands of troops almost anywhere they choose in the world on any pretext – like latter day proconsuls of Rome – it’s the fact they assert the right to.

However, such action – like replacing a recalcitrant government with another while having zero respect for international law – was previously undertaken covertly but is now, in the case of Venezuela, being done openly and brazenly.Issuing diktats from Washington to sovereign countries and governments, threatening them with military aggression if they refuse to accede to those diktats, has been in keeping with the workings of this overweening superpower for decades now.

Juan Guaido, Washington’s newly appointed placeman in Caracas, is but a minor actor in the horror movie that is US power politics. He is one in a long line of such; a here today, gone tomorrow nonentity whose only qualification for the role given to him by Washington is his ability to take instructions. A fanatical hawk like John Bolton would have it no other way.

Undertaking a character study of Mr Bolton and others of his ilk throws up the dichotomy between their eagerness to hurl soldiers into battle, and personal histories which reveal extraordinary efforts to avoid going into battle themselves.

John Bolton, George W Bush, Dick Cheney, hawks and neocons all, each took steps to avoid being drafted for the war in Vietnam. Bolton was actually unabashed about ensuring that he would not be drafted, writing in his Yale University 25 year class reunion book, “I confess I had no desire to die in a Southeast Asian rice paddy.”

Instead, like former President George W Bush, responsible for pushing Iraq into the abyss in 2003, Bolton joined the National Guard and stayed home. He also enrolled at Yale to study law before segueing into politics as a strident advocate of might is right, climbing the greasy neocon pole in Washington to positions of influence.

Speaking of Iraq, in Bolton the war had, and continues to have, its most resolute champion and defender, even though it has long been accepted by all apart from the most mendacious and amoral that it only succeeded in unleashing a carnival of carnage. Bolton went from statingin the lead up to the war in 2002, “I expect that the American role actually will be fairly minimal,” to in 2015 stating, “I still think the decision to overthrow Saddam was correct.”

Occupying the space between both those statements, made 13 years apart, are the millions of lives lost, upended, ruined and forever destroyed in consequence.

I am proud to say I was active in the antiwar movement in the lead up to and aftermath of the invasion of Iraq. In those circles, John Bolton was regarded as a cross between the antichrist and Pol Pot – and with some justification given what ensued and the man’s lack of remorse or contrition over the catastrophe inflicted on the country and its people, not forgetting the destabilization of the entire region.

It was therefore a moment to savour when Tony Benn, a towering figure of the left in the UK and impassioned opponent of the war in Iraq, delivered a verbal battering to John Bolton during a 2008 televised debate on the war and its aftermath. Benn spoke for millions in Iraq and around the world that night. At one point, in words that belong to the ages, he boomed: “There is no moral difference between a stealth bomber and a suicide bomber!”

Bolton, visibly discomfited at being on the receiving end of such a withering and eloquent rejection of all that he and his fellow warmongers represent, must have been wishing his car had broken down on the way to the studio, requiring him to cancel.

In more recent times, Bolton was key in Trump’s unconscionable decision to unilaterally pull out of the P5+1 Iran Nuclear Deal (JCPOA) in May 2018, followed by the return of even more stringent sanctions on Iran than had been in place prior to the deal. He was also a prime mover of Trump’s decision to withdraw from the INF (Intermediate-Range Nuclear Forces) Treaty with Russia, laying the ground for a new arms race.

The man, to be frank, is a thug in a suit, who since taking up the role of Trump’s national security adviser in April 2018, has rampaged around the world like a vicious dog, intoxicated with the power to threaten, intimidate and bully at will. He is America’s Tomas de Torquemada (he of Spanish Inquisition fame). The only difference is that where Torquemada was committed to punishing apostates who dared resist the writ of the Catholic Church in the 15th century, Bolton is committed to punishing apostates who dare resist the writ of Washington in the 21st.

Someone who knows Bolton more than most is Richard Painter, a lawyer who served in the Bush administration. When Bolton’s appointment as Trump’s national security adviser was announced, Painter tweeted his dismay along with a chilling warning: “John Bolton was by far the most dangerous man we had in the entire eight years of the Bush Administration. Hiring him as the president’s top national security advisor is an invitation to war, perhaps nuclear war. This must be stopped at all costs.”

I have nothing more to add.