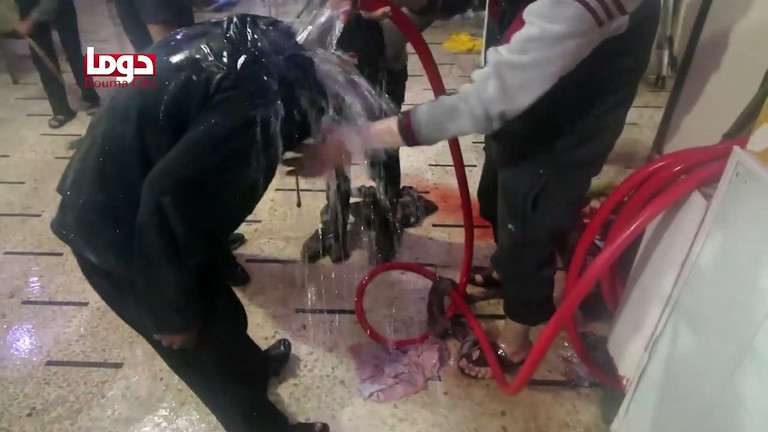 In an extraordinary turn of events, corporate media appears to have been exposed again as an extension of state foreign policy, by a member of the establishment media cabal, manufacturing consent for regime change in Syria.

Riam Dalati is on the BBC production team based in Beirut and describes himself, on his Twitter page, as an “esteemed colleague” of Quentin Sommerville, the BBC’s Middle East correspondent. Dalati broke ranks with his UK Government-aligned media, on Twitter, to announce that “after almost 6 months of investigation, I can prove, without a doubt, that the Douma hospital scene was staged.

The scenes in question are those manufactured by the White Helmet pseudo-humanitarian group and activists affiliated to Jaish al-Islam, the extremist armed group in charge of Douma at the time of the alleged chemical weapon attack on April 7, 2018. The scenes of children being hosed down, following a “chemical attack” were immediately accepted as credible and appeared alongside sensationalist headlines in most Western media outlets, including the BBC, CNN and Channel 4. Simon Tisdall of the Guardian wrote an opinion piece, with the headline ‘After Douma the West’s response to Syria regime must be military’ – only two days after Douma, effectively calling for all out war.

@bbclysedoucet will the #BBC take instructions fm regime change "troll" Idrees Ahmad? This is turning into a very interesting infight between those who were all on the same side until recently. How will the BBC manage this credibility crisis? @21WIRE @ukcolumn @RussiaUN pic.twitter.com/iF1N2Zxfsn

While Dalati’s tweets have clearly distressed some notables in the establishment camp, Dalati is no stranger to such controversy. Almost immediately after the alleged incident in Douma, he tweeted out his frustration that “activists and rebels” had used “corpses of dead children to stage emotive scenes for Western consumption.” The emotive wording of Dalati’s tweet, he was “sick and tired” of such manipulation of events, suggested that this was not the first time children had been used as props in a macabre war theatre designed to elicit public sympathy for escalated military intervention in Syria disguised as a necessary “humanitarian” crack down on “Assad’s gassing of his own people.”

Dalati had been referring to the arranging of two children’s corpses into a “last hug” still life composition, a photo that went viral, rocketed into the social media sphere by activists who had collaborated with the brutal Jaish al-Islam regime while it tortured and abused the Syrian civilians under its control.

Perhaps Dalati’s apparent outburst could be explained by his participation in the production of the controversial September 2013 BBC Panorama documentary, ‘Saving Syria’s Children’. An independent researcher, Robert Stuart, has made it his life’s work to present a compelling argument that “sequences filmed by BBC personnel and others at Atareb Hospital, Aleppo on August 26, 2013 purporting to show the aftermath of an incendiary bomb attack on a nearby school are largely, if not entirely, staged.”Perhaps Dalati had witnessed one too many stagings of events that would precipitate the potential for war in Syria between the US and Russia.

Whatever the reason for Dalati’s exasperation, the tweet was deleted before a watered down version appeared. Dalati claimed that a “breach of editorial policy” and lack of context was behind this alteration. Apparently BBC employees are not allowed to be “sick and tired” of the exploitation of children to promote a war that will inevitably kill more children. Simultaneously, Dalati’s account was protected, making tweets visible only to approved followers.

Here is an example of how BBC's Riam Dalati, along with so many in US UK media, saw it as their role to smear those who raised legitimate questions suggesting for example that #Syria chemical attack scenes eg Douma may have been staged. Now, Dalati (see above) admits it was true pic.twitter.com/OIV2HFgoCs

On two significant occasions to date, Dalati appears to deviate from the BBC narrative road map in Syria. However, Dalati had participated in the corporate media lynching of journalists and academics who had dared to question the dominant “chemical attack” narrative, at the time of the alleged incident in Douma, dismissing them as conspiracy theorists. These “conspiracy theorists” included acclaimed journalist, Robert Fisk and Uli Gack, an experienced war correspondent with ZDF, a German public media outlet. Independent journalist, Eva Bartlett, and Pearson Sharpe of One American News Network also reported evidence of staging and mainstream media distortion of events in Douma.

Hey @mwendling remember this question you asked me before your smear puff piece? "Do you believe that the alleged chemical attack in Douma was staged, a “false flag” event, or was faked?" Any comment now? #BBC #Douma #WhiteHelmets @21WIRE @stranahan @GarlandNixon @RussiaUN pic.twitter.com/UZeqcrwPqQ

I visited Douma shortly after the alleged attack. I interviewed medical staff and civilians who were adamant that a chemical attack had not taken place. Doctors and nurses, some of whom were on duty on the night in question, told me that adults and children were suffering the effects of smoke inhalation. They described the panic generated by the activists and White Helmet operatives who arrived crying “chemical attack” before they hosed down the traumatised patients.

20-year-old Suleiman Saour told me: “At 7pm we had been receiving wounded people all day long. At 7pm someone came in carrying a little boy, he laid him on a bed and said he had been hit with chemical weapons. Basically I checked the boy […] he was suffering from smoke inhalation [..] we washed his face, used a spray and Ventolin. Later on we found out the child had asthma and it got worse because of the smoke.”

Academics, Professors Piers Robinson and Tim Hayward, came under concerted attack as did other members of the Working Group on Syria, Propaganda and Media when they analysed the events and questioned the veracity of it being a chemical attack. In the UK, the Times published no less than four articles labeling myself and the “rogue” academics as “Assad’s useful idiots,” timed to perfection on the day that the UK, US and France launched their unlawful bombing campaign against Syria. A bombing campaign that was fully enabled by the ignominious rush to judgement by corporate media in the West.

It has taken Dalati six months to arrive at the same conclusion as those he condemned as compromised “conspiracy theorists,”therefore we must question his motives for suddenly releasing these conclusions. Peter Ford, former UK Ambassador to Syria, gave me his opinion on Dalati’s revelations.

“The UK joined Trump and Macron in illegally bombing Syria largely on the basis of a video clip shown ad nauseam on the BBC, which a BBC Syria producer has now said he has evidence was staged. The BBC in their statement are not denying the claim. The implications are shattering: firstly that the state broadcaster effectively connived at a manipulation of public opinion, and secondly that the British government launched its attack on Syria on a false and fabricated premise. This demands a public enquiry.”

Ford’s statement highlights the seriousness of Dalati’s statement which must surely raise questions about the possibility of previous “chemical attack” narratives also being manipulated, staged or fabricated. Swedish Doctors for Human Rights investigated the alleged chlorine gas attack in Sarmin, March 2015 and found the medical procedures conducted by doctors at the scene to be extremely questionable.

Dr Leif Elinder, a Swedish medical doctor and paediatric specialist, found that “after examination of the video material, I found that the measures inflicted upon those children, some of them lifeless, are bizarre, non-medical, non-lifesaving, and even counterproductive in terms of life-saving purposes of children.” This video, produced and presented by the White Helmets and their colleagues at the Syrian American Medical Society (SAMS), was shown during a UN Security Council “closed door” session to promote a no-fly zone which translates to protection for the US coalition-backed terrorist forces on the ground in Syria.

As BBC producer has stated publicly that the hospital scenes during the Douma “attack” are staged, the BBC has distanced itself by stating that these are the personal claims of an employee which do not mean an attack did not take place. The July 2018 OPCW interim report has already discredited the early sensationalism of western media reporting. “No organophosphorus nerve agents or their degradation products were detected, either in the environmental samples or in plasma samples from the alleged casualties,” it stated. No Sarin.

Dalati’s revelations must also be viewed in context. They follow similar conclusions arrived at by corporate media colleague and journalist, James Harkin, a Guardian contributor who published a long-winded Douma investigation in the Intercept. Harkin also conceded that the Douma hospital scenes were likely staged and that the Sarin canard was a non-starter.The OPCW Fact Finding Mission (FFM) has not yet reached a conclusion that a chemical attack of any kind took place in Douma. The environmental samples were reported to contain chlorinated organic molecules such as trichloroacetic acid and chloral hydrate, which could be attributed to something as basic as chlorinated drinking water. Despite this ambiguity, the BBC initially ran with the headline that ‘Chlorine was used’ in the Douma attack before altering to ‘Possible Chlorine at Douma Attack Site’. Another mistake? Or another deliberate attempt to mislead and shore up the UK FCO regime change storyline in Syria?

It is very unlikely, despite the BBC protestation, that Dalati would risk publishing his claims without approval from BBC hierarchy. Timing is always crucial when examining events that have the potential to expose colonial media, particularly the BBC, as the refined state PR agencies they are in reality.

Based on an informed and intelligent interpretation of events with historical context, we could speculate that the OPCW is about to release its final findings on the Douma attack. A report which has the potential to lay bare the full extent of the BBC’s deception and falsification of facts in Douma. A report which could raise unpleasant questions about corporate media reporting, particularly on alleged chemical weapon use by the Syrian government, throughout the 8 year conflict in Syria. Was Dalati’s shock information release nothing more than a damage limitation tactic by the BBC or is Dalati genuinely a rogue truth-teller? Only time will tell.

1/2 Important to note that Dalati #Douma revelation likely isn’t some mea culpa, but the start of a damage limitation process by preempting perhaps imminent @OPCW report, the likely inconvenient findings of which BBC & UK govt by now almost certainly awarehttps://t.co/EDSL8VYPgj

What Dalati has done is highlight the hypocrisy and bias of Western media and government officials. The BBC report on the Russian “production” of Douma-chemical-attack-denying witnesses at the HQ of the OPCW in the Hague emphasises the dismissal of the event as a “despicable stunt” by the UK, US and France who boycotted the proceedings. French ambassador to the Netherlands described the Syrian civilian testimonies as an “obscene masquerade.” The Guardian ran with this statement as its headline, reducing Russia’s attempt to bring some clarity to the Douma attack to the unveiling of “supposed witnesses” in order to discredit such attempts to derail their preferred narrative.

@patrickwintour #Guardian "Diplomatic" Editor – do you still claim the Russian presentation of #Douma witnesses at The Hague was "obscene masquerade"? You know, now the #WhiteHelmet hospital scenes are confirmed by BBC to be a really obscene masquerade. @21WIRE @PiersRobinson1 pic.twitter.com/lASkPMTyAw

Now, it appears that the real obscene masquerade took place in the Medical Point in Douma, was constructed by the UK FCO-financed White Helmets, and was adopted by the BBC and other state stenographers as gospel in order to further criminalise the Syrian Arab Army just as the final liberation of Douma from Jaish al-Islam brutal rule was fast approaching. This obscene masquerade resulted in the unlawful bombing of Syria by the US, France and the UK. As Peter Ford stated, “this demands a public enquiry.”