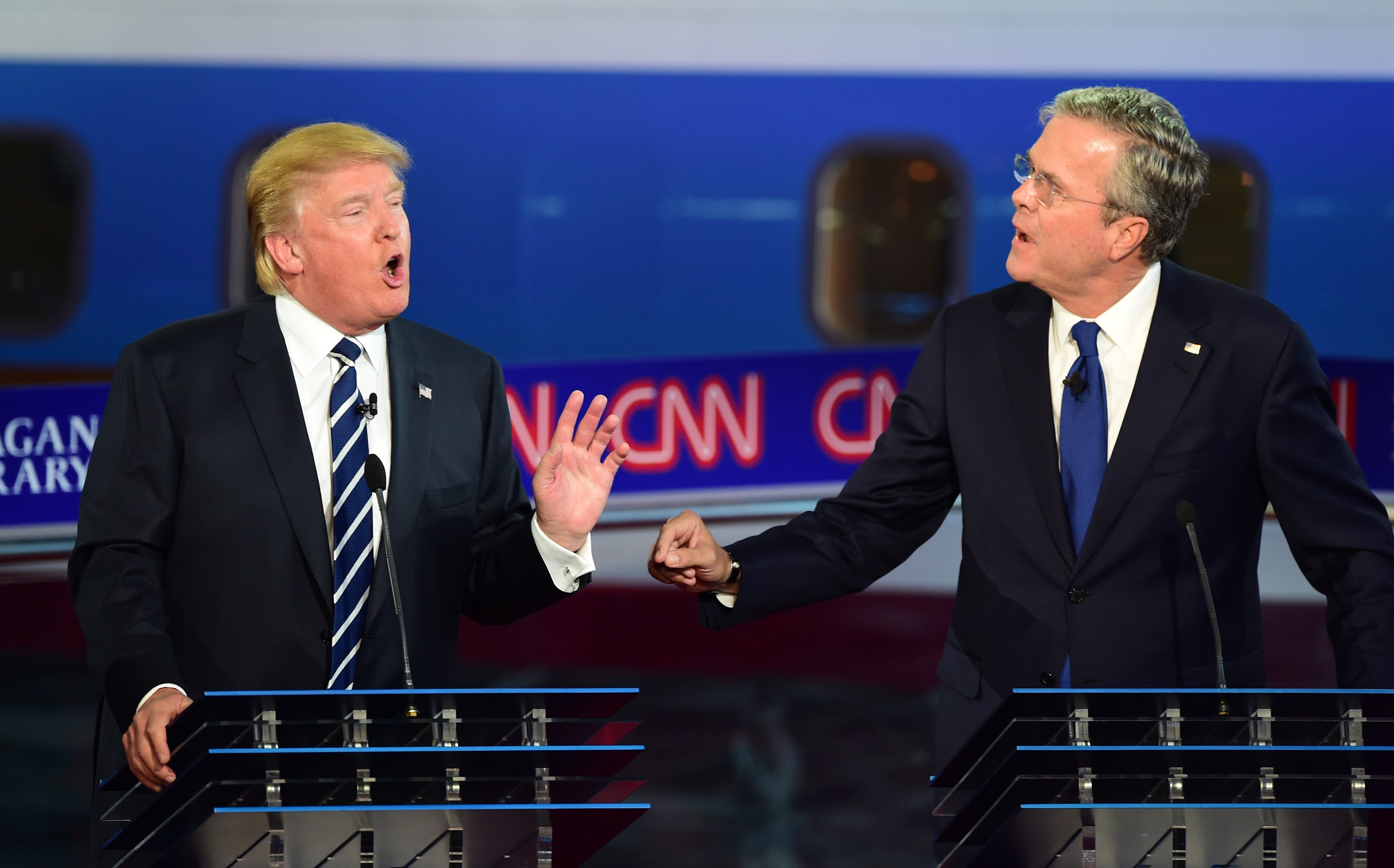 Trump Is Being Manipulated By The Deep State, Neocons, Ruling Elites, Zionists… – Part 2

BATTLE FOR WORLD / TRUNEWS | February 21, 2019: Rick Wiles, host of TruNews, did an update the next day about the truce that happened between President Trump and the Bush family. Reiterating that he was given some information from a friend who’s connected to various political dynasties/organizations who gave him some inside (information) about what is happening and it made sense, the pieces started to come together… The friend said to him, most of you know about the infamous piece of paper, the envelope, at the George H. W. Bush funeral that was passed to the Bush family. The shocked look on the face of Jeb Bush, total shock, and even Laura Bush face changed. It took a second or two to regained their composure, something was on that piece of paper that was shocking. When the casket of George H. W. Bush was passing, Bush Jr. bowed his head (as if to say), it’s over – the Bush family ambition of pursuing a New World Order. Whatever was in the note, they knew the gig was up.

(In the “enhanced”, Silent Revolution Of Truth, Compilation Edition, the free PDF book: Download and read about the people of the Earth will still cry out in the coming years, when the two B. (i.e. Bush Sr. and Bush Jr.) take over the presidency in America, page 276. George Walker Bush in regards to power and the engagement of force, page 350. The two Bush presidents in America, pages 351, 352 and 353. The Terror War was officially started by George Bush Jr. on September 11, 2001, page 663.  Trump will do stupid things just like the Bushes, Clinton, Obama, etc., page 693. Obama followed in the same path as the murderous predecessor George Walker Bush, page 831. The insidious and might-greedy criminal gang around Obamaare the ones who governs, page 832. President Bush Jr. to respond to terrorism all over the world, page 904. The USA and especially two of its irresponsible US Presidents – father and son (i.e. Bush Sr. and Bush Jr.) – will have to bear the responsibility for both wars, page 1085. The war mayhem Bush Sr. and Bush Jr. plan to unleash in the Middle East, page 1168. Bush Sr. faction, 1488. George W. Bush and cohorts, page 1491. The US army marched into Iraq with tremendous spreading lies, page 1550. Note: Use the page number display located at top right to find the correct page. Free Book, PDF Format – Links: Book Summary | and Download Book) Rick Wiles feels that Donald Trump timed the delivery of that note to the Bushes as the father’s body was being carried out. Whatever was in that note, the gravity of it conveyed a pretty direct message. There was something in the note that said: This would be revealed on this date if you do not back off.  (BattleForWorld: Some have speculated that part of the threat could be related to documents that were sealed about the September 11, 2001 terrorist attack on the World Trade Center in New York City.)

Whatever was in the note, the message was relayed and within several days, there was a peace offering: a truce offered from the family to Donald Trump. And George W. Bush contacted President Trump and said, I don’t want my father’s mantle. I don’t want to be the godfather of the Bush crime-syndicate.

There are secrets inside the U.S. government and now President Trump is privy to some of those. And some of those secrets could be related to anything in the Bush family that could devastate them (if released publicly). And most likely it was something that was prosecutable. The Bush controlled crime-syndicate, says Rick Wiles, I believe was running the “resist Trump” and when I say resist Trump I do not mean all the stuff in the media. I am talking about the Robert Mueller investigation. Mr. Mueller was a Bush agent; (James) Comey was a Bush confidant, going all the way back to George H.W. Bush. (Andrew) McCabe says he was a lifelong Republican, etc.

Co-host: If this was a blue, red Democrat-Republican then why would they hurt themselves?

Rick Wiles: Mr. Mueller was the FBI director, he took over the FBI three or four days after 911. He was placed there, for 911; to manage the FBI during 911. (Bush Jr. was too, I believe, said one of the co-hosts.) And so Robert Mueller was turned loose, hound of hell to go after Donald Trump.

Rick Wiles: I have said for years, the race is on. Who’s going to go to prison first?

OK. They (the Bush crime-syndicate) were winning. They were putting (Michael) Cohen in prison. (Paul) Manafort in prison. Roger Stone in prison. They (the Bush crime-syndicate) were climbing up the ladder. And Donald Trump pulled his ace card out at that funeral. This is my gut feeling, says Rick Wiles. The people backing Trump says, we will help you out here. The Jewish mafia sent a warning to the Bush mafia to back off, get away from their boy. And so the truce was put in place.

Rick Wiles: What I was told is that Mr. Barr – George W. Bush insisted on William Barr being the Attorney General to enforce the truce.

Rick Wiles: The source says, it’s not going to get deeper. It’s over. They have ended the war (between Trump and the Bush family). It was getting ready to pop and Donald Trump pulled out an ace card at the funeral and laid it on the table.

Rick Wiles: In Stuart Eizenstat’s latest book he said that Jimmy Carter lost the second term because he questioned Israel. Carter told the author that he opposed the West Bank settlements and the Jews removed him (from getting a second term).

You have the Bush crime-syndicate, and then you have the Jewish mafia that owns Donald Trump. In one of those article, they called him “our boy”. These are powerful Jews saying, we put our boy in the White House.

Rick Wiles: A couple weeks ago, CNN said, there may not even be a report, Mueller is going home. So today (February 20, 2019) CNN reports what we (TruNews) have been saying weeks ago.

CNN reported today (February 20, 2019) that the Justice Department is preparing for Mueller’s report as early as next week. Doesn’t it sounds like there’s a report coming? (BattleForWorld: But the news media often tries to deceive.) When you read further down the article: Attorney General William Barr is preparing to announce as early as next week the completion of Robert Mueller’s investigation, with plans for Barr to submit to the (U.S.) Congress soon after, a “summary” of Mueller’s confidential report.

Rick Wiles: There’s not going to be a public report. The Attorney General is not obligated to give this report to Congress, nor is he obligated to release it to the public. All he’s obligated to say is that there has been no effort by Donald Trump to hinder the investigation. And I am going to tell you, that’s all he’s going to say. This thing is over. And the (CNN) article also said that a number of the Mueller investigators have quit and returned to their previous jobs.

Co-host: If they are going to go after President Trump for this, well guess what, tit-for-tat. He’s going to start unleashing what he knows.

Rick Wiles: Nothing is going to be released. It’s all settled.

Co-host: Who loses? The (American) people. I always wanted the truth.

There were never 50,000 sealed indictments; secret indictments. That was a Q hoax that was circulating for years. It was an all-big joke.

This is over. The crime-syndicates have cut a deal and Mr. Barr is going to implement the truce.

So, Mr. Rosenstein is leaving. Rod Rosenstein, the man who was running the Bush investigation of Donald Trump from inside the Justice Department. He’s being replaced by Jeffery Rosen, who’s working for Attorney General Barr.

President Trump’s attorney Michael Cohen has been granted a two-month delay to report to prison. This just happened. You know what, this got to get fixed – it’s part of the deal.

It’s over for the investigation and they are not going to remove Donald Trump. And Bill and Hillary Clinton aren’t going to prison. .

Now, one thing to know about these crime-syndicates, says Rick Wiles, their father is the devil. Therefore, they have the traits of their father. That means they steal, they kill, they backstab, they lie, they deceive, etc. So, this truce will not hold very long. Well, hold enough to get through the 2020 election, yes. It will hold long enough until the current players die off.

We’re done with the investigation cycle. We’re looking forward to the 2020 campaign now, we have the machinery and the grassroots, and that’s unstoppable.

Everything that is going on geopolitically, it’s almost a repeat of the Bush administration: Here we are 18 – 19 years in Afghanistan. Why are we still there? Well, we (the U.S.) are getting ready to franchise that operation. We are getting ready to send it to Venezuela to get the war operation going there in the western hemisphere; that’s going to continue. We would have had that with Jeb Bush or Hillary Clinton. We would have had that war operation going on and it’s still going on. The way it has happened (i.e. the truce), he (President Trump) has taken it (i.e. the Bush part of the New World Order) over.

The Israeli President Benjamin Netanyahu told Trump to keep the U.S. troops in the Middle-East. He (Trump) saluted yes sir I am going to do what you say, and so the American troops are staying there (moving to Iraq). …

(BattleForWorld: If Jeb Bush, Bush Jr., Laura, etc. knew the weight of what was written on the paper that means the family is well aware of Bush Sr. far-reaching criminal activity. And that means Jeb is well aware of family workings in politics and government when he ran for president of the United States. And the American people are voting often for promises by these presidential candidates, most of which can never be fulfilled to anything of much good, because you have the crime-syndicates running things in the background, and the people are unaware.)