Why does Gladio always pick Nairobi do carry out massive false flag bombings? Obvious justification to amp up illegal U.S. attacks on Somalia! Why does Gladio always pick Nairobi do carry out massive false flag bombings?  Obvious justification to amp up illegal U.S. attacks on Somalia!

As the death toll in the Nairobi hotel attack hit 21, including UK and US citizens, Al-Qaeda-affiliated terrorist group Al-Shabaab claimed it was revenge for US President Trump’s recognition of Jerusalem as Israel’s capital.

The Somali-based militant group claimed responsibility for pelting the five-star DusitD2 hotel and business complex in Nairobi with grenades shortly after 3pm local time, before a suicide bomber entered the lobby and blew himself up. Occupying the upscale hotel for almost 20 hours, the gunmen killed at least 21 people in total, including the 40-year-old American CEO Jason Spindler who had survived the 9/11 attacks in New York.

Special forces flushed out the militants, and Kenyan President Uhuru Kenyatta said on Wednesday afternoon that all the terrorists had finally been “eliminated.” 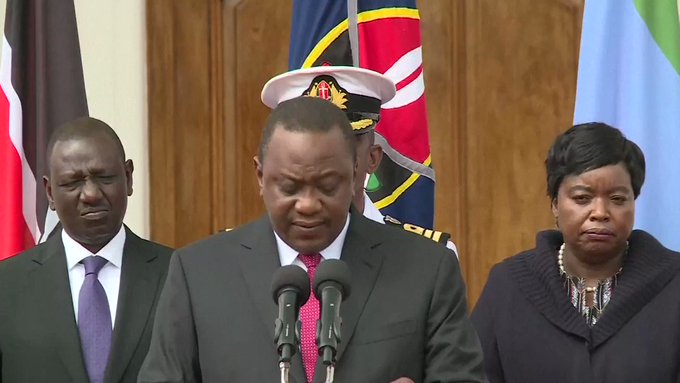 Kenyan President Uhuru Kenyatta says that all the “terrorists” who stormed an upmarket hotel complex in Nairobi on Tuesday have been “eliminated” after an almost 20-hour siege that left at least 14 people dead.

In a statement released Wednesday and reported by Reuters, the terrorists claimed it was the “witless” Jerusalem decision of Donald Trump that triggered the operation.

The statement might be Al-Shabaab’s opportunistic attempt to justify the murder of civilians while capitalizing on the Palestinian issue, noted Rita Katz of the SITE Intelligence Group monitoring jihadist groups worldwide. The claim seems to be supported by a picture showing at least one attacker wearing a red headband bearing the text “heading to Quds [Jerusalem].”

Allied with Al-Qaeda and Boko Haram, Al-Shabaab has targeted Kenyans before. A 2013 attack at the nearby Westgate Mall in Nairobi left 67 people dead, and the group killed 148 people in a 2015 assault on a university in Garissa. The group’s attacks have been focused on Kenya since Kenyan peacekeepers deployed to Somalia to fight it in 2011.

The storming of DusitD2 came a day after a Kenyan court declared that three of the suspected attackers on the mall would face trial.

President Trump’s decision to move the US embassy in Israel from Tel Aviv to Jerusalem last May was a symbolic one that angered many throughout the Arab world. Jerusalem is home to the Al-Aqsa Mosque, the third holiest site in Islam and a flashpoint for Arab-Jewish tension in the city.

The Israeli embassy in Kenya condemned Tuesday’s attack, which it called “yet another attack on innocent people going about their errands.” The embassy also vowed that both countries would “continue to fight terror together.”