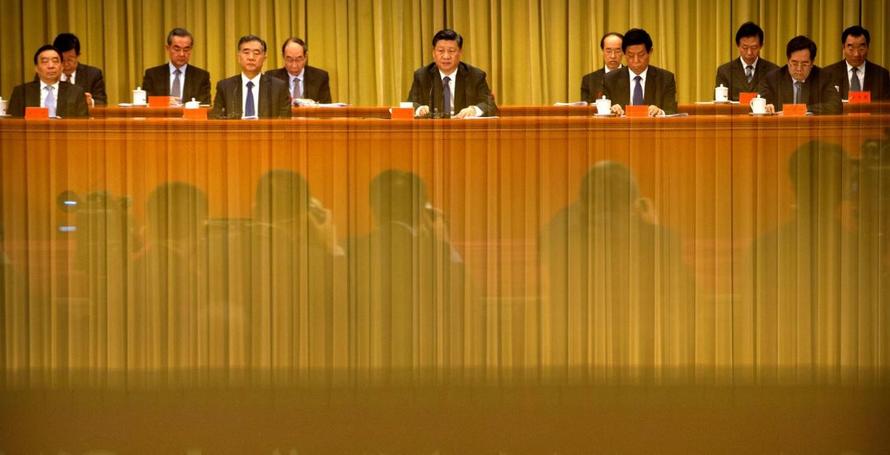 With trade talks between the US an China finally ramping up, reviving hopes that a deal might end a slump in global equity markets that has carried into the New Year, one would think ‘Taiwan’ would be the last word any investor wanted to hear. But we’ve been hearing it with an alarming frequency lately. From a belligerent Chinese admiral and from President Xi Jinping.

And in a Wednesday speech to commemorate the fortieth anniversary of a landmark shift in China’s Taiwan policy, President Xi offered a vision of the future relationship between China and Taiwan that blatantly contradicts what Taiwan wants for itself – which is, more autonomy, if not outright independence, as the ruling pro-independence party has repeatedly insisted.

Instead, Xi insisted during his speech that China reserves the right to use force to bring Taiwan to heel – but that peaceful “reunification” would be Beijing’s goal. Xi has made resolving the “Taiwan issue” a priority. 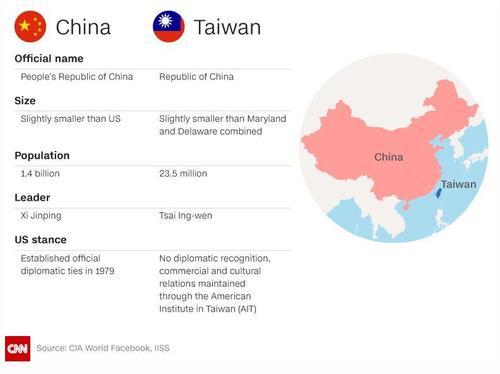 China reserves the right to use force to bring Taiwan under its control but will strive to achieve peaceful “reunification” with the self-ruled island that has a bright future under any future Chinese rule, President Xi Jinping said on Wednesday.

Taiwan is China’s most sensitive issue and is claimed by Beijing as its sacred territory. Xi has stepped up pressure on the democratic island since Tsai Ing-wen from the pro-independence Democratic Progressive Party became president in 2016.

Xi has set great personal store in resolving what the Communist Party calls the “Taiwan issue,” holding a landmark meeting with then Taiwan president Ma Ying-jeou in Singapore in late 2015, just before Tsai was elected.

Xi argued during his speech that the “one country, two systems” model of governing Hong Kong would be ideal for Taiwan (something that the people of Taiwan vehemently oppose). Xi told the audience, which included Taiwanese business people, that independence for Taiwan would be “a disaster”.

Xi spoke at Beijing’s Great Hall of the People on the 40th anniversary of a landmark Taiwan policy statement.

He said “reunification” must come under a one-China principle that accepts Taiwan as part of China, anathema to supporters of Taiwan independence, adding that the “one country, two systems” model of autonomy, with which China governs Hong Kong, was the best way for Taiwan.

China translates the word “tong yi” as “reunification,” but it can also be translated as “unification,” a term in English preferred by supporters of Taiwan independence who point out the Communist government has never ruled Taiwan and so it cannot be “reunified.”

The vast majority of Taiwan’s people are clearly aware that Taiwan independence would lead to a “grave disaster,” Xi told an audience that included Taiwan business people and senior party officials.

And while “Chinese people don’t attack Chinese people,” Xi said China’s military wouldn’t hesitate to resort to violence against foreign interlopers – a veiled reference to the US.

“We do not promise to renounce the use of force and reserve the option to use all necessary measures” to achieve this goal and prevent Taiwan independence, he said.

This, though, was aimed at foreign forces who sought to interfere and the tiny minority of Taiwan independence forces and their activities, Xi said without elaborating in what was likely a reference to the United States, Taiwan’s strongest backer.

In what experts said marked his first overt hint that China actively interferes with elections in Taiwan, Xi said the mainland had succeeded in “frustrating” Taiwan’s independence movement and “other separatist activities,” according to CNN.

During his speech, Xi said China had “achieved a great victory in frustrating the Taiwan independence movement and other separatist activities.”

Lev Nachman, a Taiwan specialist and PhD student in Political Science at the University of California Irvine, said this appeared to be an oblique acknowledgment of interference in the island’s politics.

“I am not sure we are going to get a more clear direct admittance from Xi himself that the (Chinese Communist Party) interferes with Taiwan’s democratic elections,” he said. “This is something we have always known was a phenomenon, but never really had any ‘hard proof.'”

Meanwhile, Xi’s speech followed a new year’s address delivered by Taiwanese President Tsai Ing-wen, who called on Beijing to “face the reality of the existence of the Republic of China.” Her remarks come after her pro-independence party suffered a serious defeat in elections last fall, where voters expressed support for closer ties with Beijing.

Xi’s speech comes a day after Taiwanese President Tsai Ing-wen gave her own New Year’s address, in which she called on Beijing to “face the reality of the existence of the Republic of China,” referring to the island by its official name. She also urged that Beijing to “respect the commitment of the 23 million people of Taiwan to freedom and democracy.”

Tsai resigned as head of the Democratic Progressive Party (DPP) in November after the historically pro-independence party suffered a crushing defeat in local government elections, which also saw voters reject a proposal for the island to compete in international sporting events as “Taiwan” rather than “Chinese Taipei,” a moniker adopted after pressure from Beijing.

While she acknowledged the elections were a “serious test for the current government,” Tsai said the results “absolutely do not mean that grassroots public opinion in Taiwan favors abandoning our sovereignty, nor do they mean that the people want to make concessions regarding Taiwanese identity.”

Though giving up some of their freedoms might seem daunting, Xi tried to assure Taiwan that there was “nothing to fear” from reunification with Beijing – and that they would enjoy even greater economic prosperity under “one country, two systems”. And while Xi said he’d be willing to give Taiwan “broad latitude” for peaceful reunification, China absolutely would not tolerate “any form of separatist activities.”

This much is clear: While Taiwan is satisfied with the status quo, Beijing is growing increasingly uneasy – evidenced by Beijing’s incessant military posturing in the Strait of Taiwan. And if markets are fearful about a collapse in the global trading order due to the US-China trade spat, imagine how they would react to saber-rattling between Beijing and Washington over Taiwan.