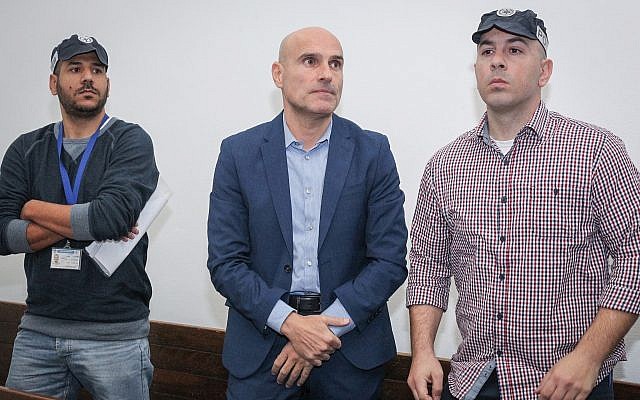 A top Israeli lawyer has been arrested on suspicions that he advocated in favour of the promotion of at least two judges in exchange for sexual favours, Israeli media reported.

Efraim Naveh, president of the Israel Bar Association, was arrested on Wednesday and appeared in court later that evening, Haaretz newspaper said.

His identity was only released publicly later in the day as the investigation into the case, dubbed by Israeli media outlets as the “sex for judgeship scandal”, was under a gag order.

Before his identity was made public, Israeli police spokesman Micky Rosenfeld said police anti-corruption unit Lahav 433 was leading an investigation into a male lawyer.

That lawyer – now revealed to be Naveh – is suspected of committing “offences of integrity” in relation to “the appointment of a female judge a few years ago and in connection with an attempt to appoint a judge in the magistrate court”, police said at the time, without naming him.

Rosenfeld said two women, a judge and a lawyer, were also called in for questioning in connection to the case, after incriminating information first reached Israeli police two weeks ago.

The suspect is believed to have had sexual relations with the female lawyer in exchange for the professional advancement of her husband, who is a judge, Haaretz and other Israeli news outlets reported earlier on Wednesday.

While the female judge was reportedly promoted in 2016 after having sexual relations with the suspect, the female lawyer’s husband’s bid for a promotion was unsuccessful, the media outlets said.

Not only does he lead the bar association, which counts approximately 59,000 members, but Haaretz also said as the association’s chairman, he “wields substantial political power due to its permanent seat on the nine-member panel that appoints the country’s top legal officials”.

In fact, the newspaper reported that all the members of Israel’s Judicial Appointments Committee – including Justice Minister Ayelet Shaked, Israeli Supreme Court President Esther Hayut, Finance Minister Moshe Kahlon, two members of the Knesset, and three Supreme Court justices – were expected to be called in for questioning in relation to the case.

Shaked, in particular, has close ties to Naveh, who “has been seen as a close political ally” of the controversial justice minister, Haaretz said.

Naveh “has been a key member of the panel whose support in committee votes has been crucial in helping the justice minister fulfill her goal of appointing a larger number of conservative and religious judges”, it reported.

Haaretz also quoted Shaked as saying that Wednesday was a “turbulent” day for her “as a justice minister and as a woman”.

Attorney General Avichai Mandelblit recused himself from handling the case due to his friendship with the suspect, Ynet reported, leaving State Prosecutor Shai Nitzan in charge.

The newspaper added that the male judge’s wife had rejected accusations that she had used her connections with the suspect to push for her husband’s career advancement.

As part of the investigation, the Lahav 433 unit raided the offices of the Israel Bar Association, as well as the suspect’s home, seizing documents and digital materials.

The Israel Bar Association “implied that Naveh was suspending his activities” with the group, The Jerusalem Post reported on Wednesday, without going into further detail.

The association announced that its national council would hold an emergency meeting on Sunday, the newspaper said.

The Jerusalem Post also reported that three members of the association resigned this week, citing concerns about corruption.

Naveh was involved in a separate scandal late last year, when he was charged with helping a female companion enter Israel without showing a passport, Israeli media reported.