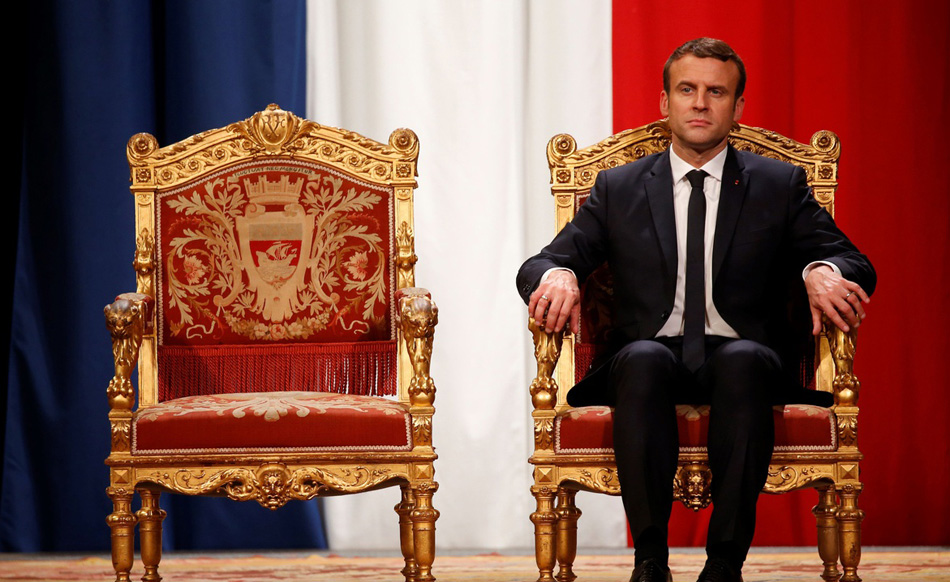 EMMANUEL MACRON: A Rothschild Plant — Whose Election Was Stolen –Morphs Into Humpty Dumpty

Clearly, the extremely violent protests in Paris are different this time.

In a country where social benefits form the bedrock of family budgets, that turned out to be a major blunder: with no trade union coordination, thousands of French people are shouting ‘Non’! What makes this crisis more challenging than others is precisely the fact that it has no leaders: the usually fractious French are, for once, of one mind.

That, right there, spells doom for the Macron administration.  And especially for Emperor Macron!  For it’s the people, free from labor union manipulation, who want justice…who want to be liberated from the EU plantation.

This unrelenting Parisian protest is fundamentally a people-powered, grass-roots driven movement that will not tolerate any more Rothschild puppets governing them.

In fact, the explosion of emotion on the Champs-Élysées is the result of the numerous offenses committed by the globalists against the French people over many decades.

For example, Paris was forced to host the final meeting where the United Nations Framework Convention on Climate Change was agreed to. See Macron: Another Globalist Pawn Hand-picked By The Rothschilds Interferes With American Foreign Policy

Now known as the utterly disastrous “Paris Agreement”, most Europeans understand that the underlying narrative that drove that whole process is absurdly false.

They are aware that the “CO2-driven climate change narrative” is a complete and total lie.  Many also know the true causes of global climate change. Geoengineering Is The Primary Cause Of Global Climate Change, Not CO2 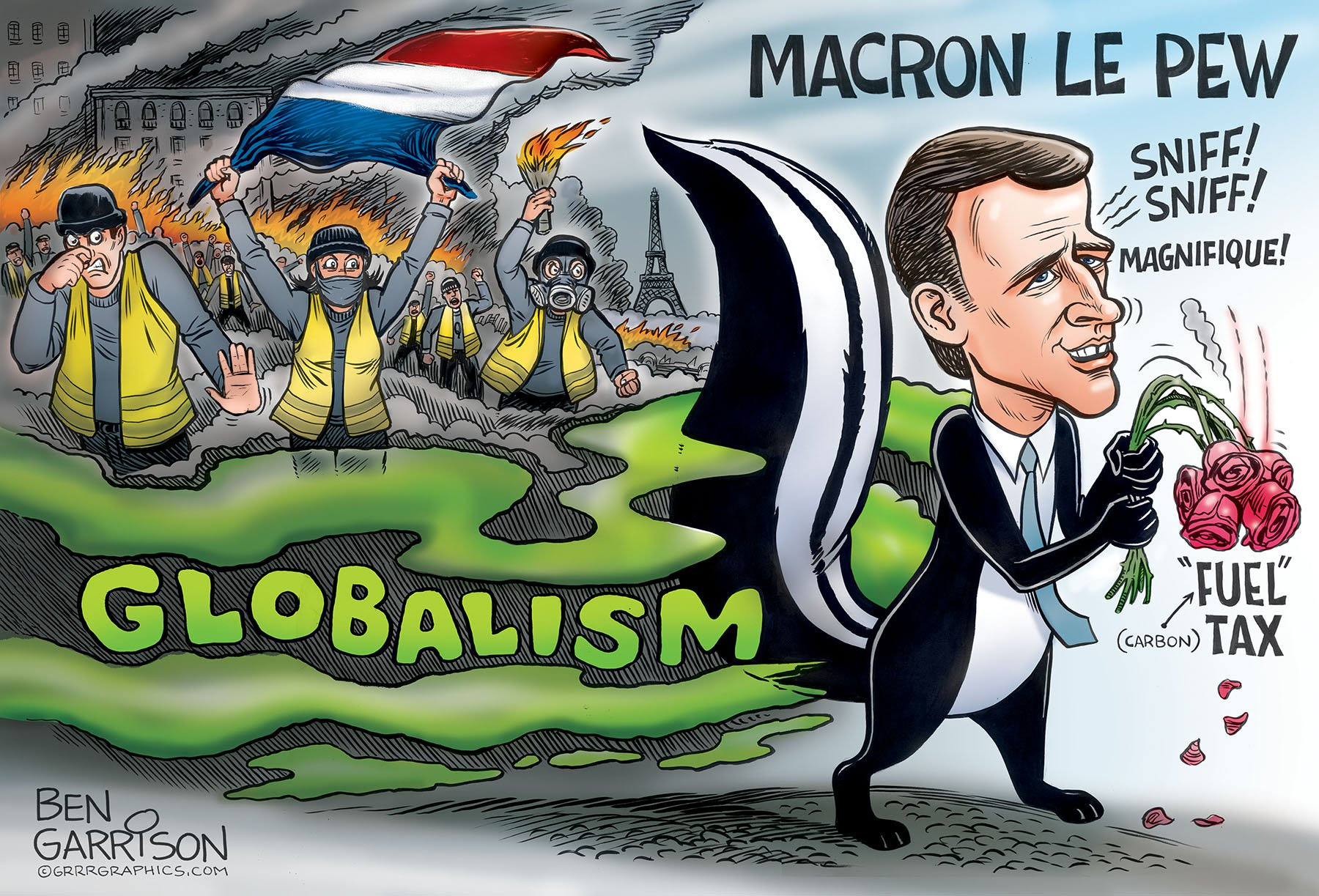 Then, as if to add insult to injury, the current French president announces yet another increase in the fuel tax that is none other than a disguised carbon tax meant to accelerate the country’s shift to green energy development.

At the end of the day, the people now know that taxes are merely the means by which the banskters steal the hard earnings from the working class “in a socially acceptable way”.

For their part, the French people have finally had enough of this oppressive “tax and spend” scam in the same way that the subjects of Louis XVI and Marie Antoinette were pushed to do a French Revolution 1.0. (French Revolution 2.0 is occurring at this very moment.)

No one does it like the French when it comes to torching Paris; even Hitler was ever-so-respectful of the City of Light during the WW2 occupation.  The whole world is now witnessing the authentic ire of the French people.

There are many beefs here, not just the fuel taxes, but the tone-deaf Macron administration doesn’t get it.

For example, the referendums that were held to determine Frances fate within the European Union were obviously rigged in favor of Fremain even though Frexit was by far more popular.

The French people are quite a street-smart lot and knew in their bones that the globalists fixed the outcome of those referendums in advance.

Because the citizens had no way of venting about that highly consequential outcome, it has festered for years waiting for a time to blow up.

All the hard evidence points directly to a stolen presidential election in 2017.

Marine Le Pen had all the momentum going her way, especially with the wind at her back blowing from a successful Brexit and victory for nationalist Donald Trump.

Both the polls prior to the election as well as the exit polls pointed to a decisive win for nationalist Marine Le Pen.

Again, the French were forced to sit in their stew-pot and simmer like frogs in boiling water seething with frustration and anger.

Of course, the naturally autocratic and dictatorial Macron has been very easy to hate since his first official acts.  Actually, the campaign season showed him to be an exceedingly immature kid who really had no right even being there. 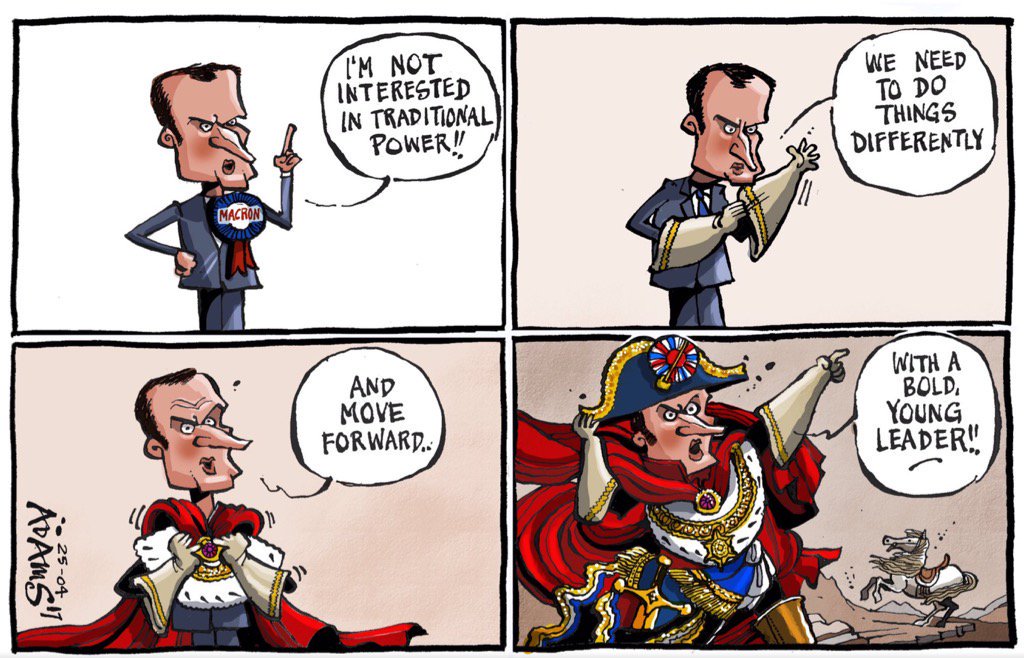 While the French are quite liberal in their marital affairs, the case of Immanuel Macron even makes most Parisians cringe with mortification.

You see, Macron is currently married to his former teacher—“Brigitte Trogneux, a woman 24 years his senior who he met as a 15-year-old schoolboy when she was a teacher at La Providence, a private school in Amiens, northern France.”

Many say that she is really his MK-Ultra mother, or rather handler, or his Illuminati wife who was chosen for him when he was a mere babe so that he could be fastidiously groomed for his future presidency.

What better way to mind-control an impressionable Manchurian Candidate to make the perfect decisions on behalf of the International Banking Cartel?  And so he has.

Macron’s marriage back story has been thoroughly researched and written about by the British media as even they are surprised at the sheer depth and breadth of the scandal.     As follows:

Writer Anne Fulda, who penned the book Emmanuel Macron: A Perfect Young Man, spoke to the politician’s parents about the scandalous affair that began while Ms Trogneux was a 39-year-old married mother-of-three.

The schoolboy’s parents had believed their son was dating his teacher’s daughter, Laurence, until the truth came out through a family friend.

Shocked at the illicit affair, the Macrons removed the intellectually gifted teenager from the school.

His mother, Francoise Nogues-Macron, told Ms Fulda: “We just couldn’t believe it. What is clear is that when Emmanuel met Brigitte, we couldn’t just say, ‘That’s great’.”

But she added: “What mattered to me was not the fact he was having a relationship with Brigitte but that he was alive and there weren’t any problems.”

Realising the affair would not be a passing phase, she is said to have told the teacher: “Don’t you see? You’ve had your life. But he won’t have children with you.”

His father, Jean-Michel Macron, revealed he “almost fell off his chair” when he learned about his son’s lover: “When Emmanuel met Brigitte, we certainly did not say, ‘How wonderful!”

The shaken parents met Ms Trogneux and asked her not to see their son again until he reached adulthood, but she defiantly told them she couldn’t “promise anything”.

(Source: How Emmanuel Macron’s parents discovered their son was dating his 40-year-old teacher) 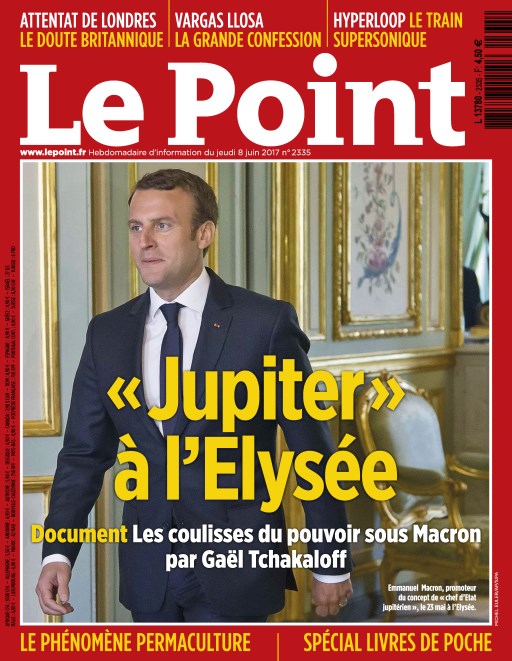 Comparisons to Jupiter, JFK and the French kings sealed his fate

The French really do not like being lorded over.

They gave up the monarchy at a time when Europe had more kings and queens than the rest of the world put together. (The last emperor of France was Napoleon whose reign ended in 1870.)

Hence, when Macron started referring to himself as Jupiter incarnate (the king of the Roman gods), many Frenchmen were understandably annoyed.

Totally fake references to JFK during the campaign season also did not sit well with many.  These were deliberately fed to the media by Rothschild agents to give the kid some shine that he desperately needed at a critical time in the race.

However, it is Macron’s signature arrogance and dictatorial conduct as President that has made him the real enemy of the French people.

His globalist handlers have made the fatal mistake of setting him up as a petty tyrant in the same way that many French kings ruled—by decree and diktat.

The longer Macron rules France as an autocracy, the more the citizenry becomes incensed.

His behavior on the international stage has not helped his despotic image either.  He interacts with his presidential peers as though he’s a high school kid running for class president, always trying to outdo and/or outshine them.

The French really do not like being humiliated like this, just as Americans disliked being embarrassed by Obama’s immature behavior whenever he traveled abroad.

The bottom line here is that Macron seemed to go out of his way to alienate the body politic in a manner never seen in any other French leader.

An Obvious Puppet, Pawn and Plant

Not only have the French people had to suffer all of these unbearable insults, they have had to tolerate being dominated by a former banker of Rothschild & Cie Banque.

His rapid rise after being a Rothschild agent was so meteoric it made him a millionaire overnight; a transparent ploy to buy his loyalties which apparently worked liked a charm.

Compared to past French presidents and prime ministers, Macron has egregiously stood out as “The Emperor who has no clothes”.

His official actions and personal conduct both reveal him to be nothing but a French marionette doing the bidding of his NWO masters at every turn.

Being such a conspicuous tool for the globalists has made him the object of extreme scorn for every patriot and nationalist throughout the four corners of France.

His presidential proclamations about the supremacy of the European Union over the sovereignty of France have been especially galling.

Calling for a European army was particularly insulting to the proud French and their prouder military establishment.

Last but certainly not least, Macron’s constant blowing of the trumpet of multiculturalism has made him an arch-enemy of every French patriot.

The France of today is unrecognizable from only 10 years ago because of the Soros-funded operation to make multiculturalism the new normal of Europe.  And Macron is the Rothschild bagman’s loudest mouthpiece in the Eurozone. 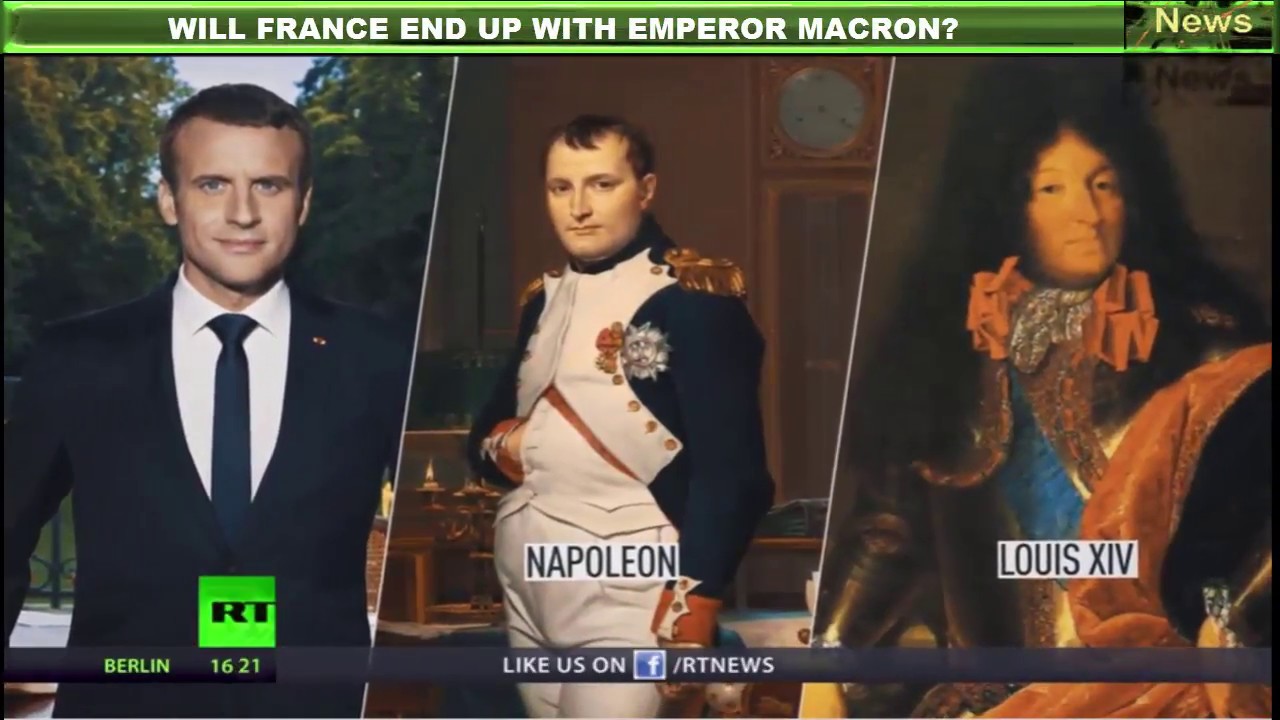 RT.com got it right from the very beginning.

He will be gone by the end of this year. See: Rothschild Puppet Macron Will Be Frogmarched Out Of The Élysée Palace

His Shakespearean downfall was destined from the start because of his secret allegiance to the banksters and their New World Order agenda.

In point of fact, no artificially propped up leader could weather the storms that are coming to France…surely not in 2018 and 2019.  The world is onto the New World Order agenda like never before, and especially onto their scheme for a One World Government.

KHAZARIAN MAFIA: Hellbent On A One World Government At Any Cost

Never has the tale of Humpty Dumpty been so poignantly re-enacted on the-post modern stage as the predictable tragedy of Immanuel Macron’s downfall.

A quick review of this exposé really makes one wonder how Macron lasted so long.  After all, the electorate was disgusted with him after his first 100 days.  The French are well known for their impatience; so why are they only now “storming the Bastille”?!

Regardless of what happens this weekend in Paris, Macron’s days are numbered. See:  125,000 French Take To Streets

Therefore, the 64 thousand dollar question is: Who will the globalists replace him with?