Rothschild Puppet Macron Will Be Frogmarched Out Of The Élysée Palace, Globalists Stole His Election In The First Place 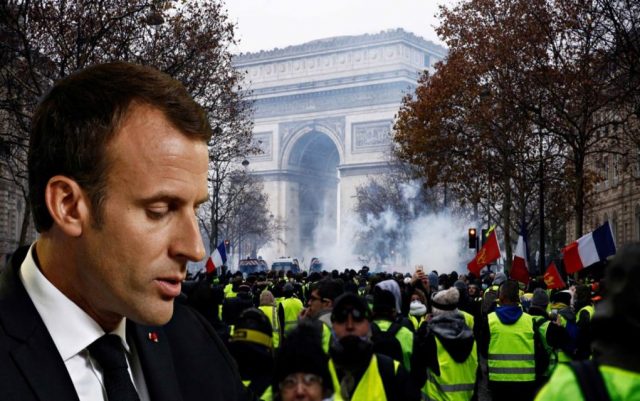 Rothschild Puppet Macron Will Be Frogmarched Out Of The Élysée Palace, Globalists Stole His Election In The First Place

French MPs to Launch ‘No Confidence Vote’ Against Unpopular Macron

French Members of Parliment are set to launch a No Confidence vote against Emmanuel Macron as the President has become plagued by plummeting popularity poll numbers and nationwide unrest.

The vote will stem from left-wing opposition parties, such as the French Socialist Party, far-left Defiant France, and the Communist Party, who have all agreed to work together on the effort.

“We’ve decided to work together to file a no-confidence vote [to the government] next Monday,” First Secretary of the Socialist Party Olivier Faure said of the matter, according to Express UK. “During the coming days, we will seek to increase the number of signatories. We have to show that other ways are possible.”

The assembly would hold a no-confidence motion within 48 hours of the request.

Under article 49 of the French constitution, a vote of no-confidence is a means for the National Assembly, on its own initiative, to force the government to resign.

Macron’s centrist Republic on the Move party has a strong majority in the 577-seat house, putting the no-confidence effort in an uphill battle.

Macron had faced similar votes in July after video surfaced of his personal bodyguard beating a May Day protester while wearing police gear. The president ultimately dogged the repercussions as the votes were defeated, solidifying his majority.

Both the popularity rating of Macron and Prime Minister Edouard Philippe are at staggering lows in the face of the Yellow Vests protests that kicked off November 17 over proposed fuel tax hikes. The protests quickly became a broader rebuke of the French President and his government’s policies.

Satisfaction with Macron hit 23 percent in November, down six percentage points on the previous month and matching the lows recorded by his socialist predecessor François Hollande in 2013.