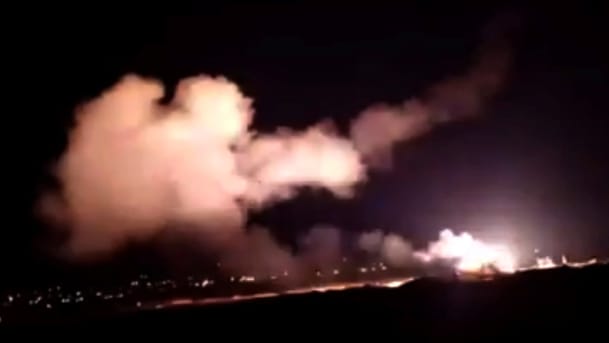 “We will not abide an Iranian entrenchment in Syria,” Netanyahu said at an air force graduation ceremony, per the Times of Israel. “We are taking action against it aggressively and powerfully, including in these very days.”

Russia condemned Israel for strikes Tuesday night on the outskirts of Damascus, the Syrian capital and headquarters of dictator Bashar Assad’s regime. Assad has survived the Syrian civil war with the support of Russian air power and Iranian ground forces, raising the possibility that Iran will deploy along the Syrian-Israeli border in positions that threaten the Jewish state.

“There is every indication that Syria’s sovereignty was grossly violated along with U.N. Security Council’s resolutions, including Resolution 1701,” the Russian Foreign Ministry said Wednesday, per state-run TASS. “The airstrikes were again conducted by the Israeli aircraft under cover of civilian planes descending to land at the airports of Damascus and Beirut.“

Lebanon, which neighbors Syria and Israel but is dominated by the Iran-controlled terrorist group Hezbollah, plans “to file a complaint to the Security Council” under the same resolution that Russia invoked.

“The Foreign Ministry also calls on the international community and the U.N. Security Council to denounce these raids, as well as Israeli warplanes’ breach of Lebanese airspace to carry out attacks on a brotherly country, in flagrant violation of U.N. resolution 1701,” the Lebanese Foreign Ministry said in a message carried by state-run media.

That diplomatic push from Iranian allies comes on the heels of President Trump’s decision to withdraw U.S. forces from Syria. But Netanyahu said that the U.S. exit won’t cause him to abandon the red lines he set for Iran in various meetings with Russian officials.

“We stand firmly on our red lines in Syria and everywhere else,” he said.