Did Mnuchin’s call to the Plunge Protection Team hit the mark? DJIA already down by 653 points at 2:20 PM 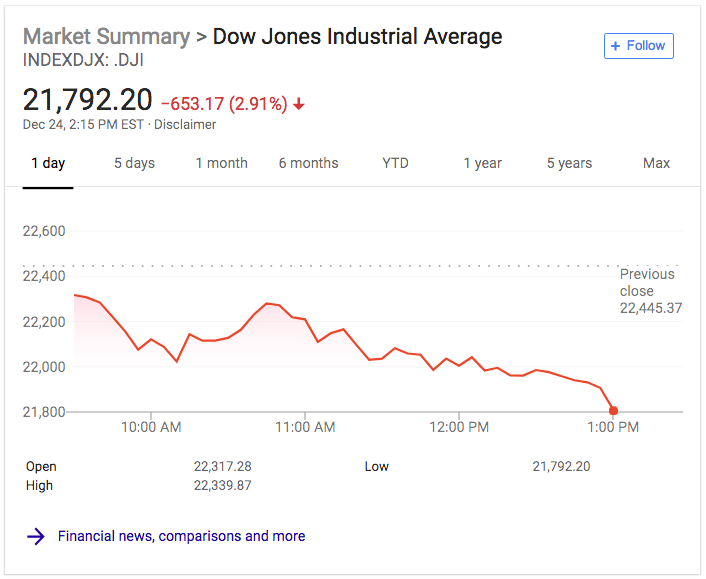 Did Mnuchin’s call to the Plunge Protection Team hit the mark? DJIA already down by 653 points at 2:20 PM

Update: With everyone suddenly freaking out over whether (and why) Mnuchin really made the kind of “liquidity test” call to bank CEOs that was reserved for the depth of the financial crisis, moments ago Mnuchin himself tweeted out details of his Sunday call (from Cabo), the gist of which is that Mnuchin was checking bank liquidity levels for “loans and other market operations” with the CEOs of the 6 largest banks, and even more importantly, on Monday Mnuchin will hold a call with the President’s Working Group on Financial Markets, better known as the Plunge Protection Team.

In other words, what was expected to be a sleepy Monday half-day session, is about to get a lot more violent.

The full text from Mnuchin’s statement:

The banks all confirmed ample liquidity is available for lending to consumer and business markets.

Washington — Secretary Mnuchin conducted a series of calls today with the CEOs of the nations six largest banks: Brian Moynihan, Bank of America; Michael Corbat, Citi; David Solomon, Goldman Sachs; Jamie Dimon, JP Morgan Chase, James Gorman, Morgan Stanley; Tim Sloan, Wells Fargo. The CEOs confirmed that they have ample liquidity available for lending to consumer, business markets, and all other market operations. He also confirmed that they have not experienced any clearance or margin issues and that the markets continue to function properly.

Tomorrow, the Secretary will convene a call with the President’s Working Group on financial markets, which he chairs. This includes the Board of Governors of the Federal Reserve System, the Securities and Exchange Commission, and the Commodities Futures Trading Commission. He has also invited the office of the Comptroller of the Currency, and the Federal Deposit Insurance Corporation to participate as well. These key regulators will discuss coordination efforts to assure normal market operations.

“We continue to see strong economic growth in the U.S. economy with robust activity from consumers and business,” stated Secretary Mnuchin and added “With the govemment shutdown, Treasury will have critical employees to maintain its core operations at Fiscal Services, IRS, and other critical functions within the department.”

Needless to say, Mnuchin’s official statement has just led to a major headache for banks because as CNBC’s Scott Wapner correctly notes, banks now have an obligation to publicly report what was discussed on the call with Mnuchin:

Every CEO on those calls has an obligation now to publicly reveal what was specifically discussed with @stevenmnuchin1 and what the context was.

Meanwhile, this is what “liquidity confirmed” may look like:

As to whether this will help to stabilize markets, well…