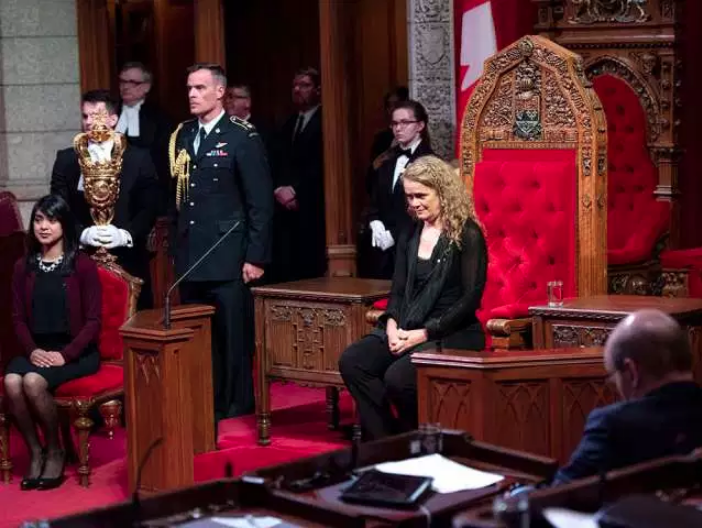 Julie Payette participates in a Royal Assent ceremony in the Senate on June 21, 2018. Justin Tang/CP 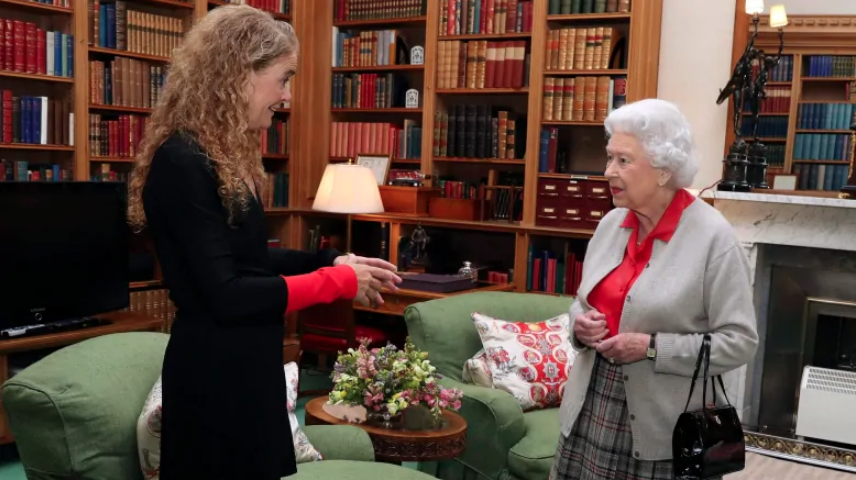 URGENT: Governor General of Canada will not protect the Canadian people

From Doreen
Below is a FAX copy, from the Canadian Department of Justice legal counsel. It is an opportunity for Canadians to take back personal power, lawfully take back final decision making authority from de facto or illegitimate Canadian governments, and pull Canada from the brink of dystopian globalization.

A response to Statement of Claim No. T2068-18 was received from Legal Council representing the defendant(s) in THE CANADIAN PEOPLES’ UNION, FREEDOM 2017 INC. [Not For Profit] v Her Majesty the Queen.

In other words, the Governor General, who is supposed to represent the Canadian people, will not be representing THE CANADIAN PEOPLES’ UNION, FREEDOM 2017 INC. [Not For Profit] on behalf of the Canadian people, against USURPATION of our sovereign rights as the whole, by the government of Canada, and all previous governments and politicians in the House of Commons.

Julie Payette participates in a Royal Assent ceremony in the Senate on June 21, 2018. Justin Tang/CP

This message is vital to every Canadian because by Maxim of Law silence is agreement, so unless the majority of Canadians lawfully say no they said yes to globalization i.e. the end of Canada as a nation. Doreen

01:07 mins
We received a fax stating the Governor General and Attorney General will not be representing THE CANADIAN PEOPLES’ UNION, FREEDOM 2017 INC. [Not For Profit]and Canadian citizens against the usurpation of our sovereign rights in Canadaby the Canadian governments back to 1931, and especially since 1982, which is even more relevant. So every political party, every politician since 1982 is guilty of participating in the usurpation of the Canadian people’s sovereign rights above its Institutions and the Constitution since 1982.

All the politicians who never demanded a national referendum on things the Canadian people should have voted on, especially when they are  selling all our resources to the United States and international globalists, and now with migration they’re looking at Justin Trudeau’s papers saying he’s going to start bringing in 450,000 people a year, and they want over 1 million by 2020.

Trump says no to the migrants in Mexico because they are waiting for Justin to sign so they can ship them all here. They forced us into globalization without our consent or the First Nations’ consent so this is really, really serious.

You are losing all your rights even though we had no rights because when you vote on Election Day you give away your rights to the politicians for four years. That’s how they made their first coup d’etat since 1931.

Representative democracy or proportional representation, any of those things that don’t give the people 100% VETO power over decision-making, over the government … that’s a dictatorship.

They are following a piece of paper to give themselves control, and they call it the Queen, which covers the Governor General, the Senate and they represent the Queen. So this is our ‘de jure’ government. Then we have the federal government that is actually de facto [illegitimate], and this is why Justin Trudeau pledges allegiance to Her Majesty Queen Elizabeth, which is not the Queen they speak about in our governance. This was all deliberate to confuse the people, it’s usurpation of our rights, and all the politicians are guilty of fraud, and treason against the Canadian people.

When we filed our Statement of Claim T2068-18 we made sure that the Governor General understood her position to protect the people. Now she’s just as guilty of treason because she’s going to be represented by another councilor against us.  I didn’t list a lawyer because I wanted to give a chance to the Governor General to assign a new Attorney General to represent the citizens, and THE CANADIAN PEOPLES’ UNION, FREEDOM 2017 INC. [Not For Profit] against the government. So now the lawyer is representing the Queen, and in the Right of Canada, which is the Canadian government and the Governor General.

This is it. We need to bind together. Walking around with a yellow vest isn’t gonna cut it. Occupy failed because it was set up by the cabal. Wall Street laughed at Occupy because hundreds of thousands of people were in the street protesting without a set plan, and Wall Street knew those protestors would stand in line to VOTE again and again, for the politician they had selected and placed there.

15:11 mins
If a politician does not offer you a referendum or politicians in government right now do not scream national referendum they are working against you. Look at Maxime Bernier’s history, and you’ll understand all he did was set a new little group to fool you. He processed a petition in Parliament, which has no real weight because if he was really working for the people, he would have demanded a national referendum. He did no such thing.

Nor did Andrew Scheer. Scheer said the people are the ones who should decide if we’re going to accept migration, and the next day in Parliament said they will have to make sure with the next government this doesn’t happen. Where was the voice of the people? Since 1982 they are all hypocrites. All of them worked under dictatorship control against the people. You can’t hide that fact. You can’t argue that fact. If the politicians were really working for the people, Michelle Rempel, etc. they’d be screaming referendum.

If you go to the RCMP to charge the government with treason, they need  confirmation from a government official. Who is going do it? Seven Premiers can help us save this country but Seven Premieres are bought and paid for. They want globalization.They’re pushing for globalization otherwise we wouldn’t be in this mess today. Somebody would have put a stop to it. Somebody would have said in 1982 that the Canadian people were placed above their Institutions and their Constitution. We have a right otherwise we are stuck, bound by a piece of paper, and a government that is keeping this as a dictatorship willingly.

It is up to the people. You don’t need government’s permission. We have The Convention of Consent to Political Self-Determination and Self-Governance for that but people need to esign it free and stand together. To join THE CANADIAN PEOPLES’ UNION, FREEDOM 2017 INC. [Not For Profit] is $22.60 per year [tax in]. It is a registry to record the will of the Canadian people, not a labor union nor a political party.

In Canada, we are fighting the World Bank, all the corporations, the Desmarais family in Canada, and all the wealthy people, so we can take back our rights. That’s who we’re up against.

19:42 mins
I didn’t want to go through a lengthy court case ‘the people versus the government’ because while we’re busy in court they get to do what they want. So we’re going to have to take different measures because we don’t want them wasting our time with a useless, lengthy court case like the one Rocco Galati [Constitutional lawyer Canada] did with COMER. COMER was not allowed to be in court because they had no jurisdiction i.e. they were not an incorporated corporation. We’re incorporated so we’re legal.

The government is confident they’re going to win because people are always complaining and will ‘not’ unite. It’s their guarantee they are going to throw us into a one-world government through the United Nations, financed and controlled by the World Bank, and that goes back to Mr. Trump. It’s a registered corporation under the United States Charter, and the President of the United States gets to pick the president of the World Bank. It is a fact. The United States has the most shares, the most money invested in the United Nations, and the World Bank, and their vote out votes everybody else. So now instead of waiting for Q Anon or anybody else to come and save your ass it’s up to you. It’s really up to you.

We need the majority of Canadians to esign free The Convention of Consent to Political Self-Determination and Self-Governance, which is a legal document that forces the Governor General to do what she’s told, or convince one of the Premiers or the RCMP to file charges because they’re not doing their jobs. Even if we go to Interpol, through Interpol we have to go through the RCMP first. In international law what happens? The lawyers from Vancouver and Quebec are the ones who drafted the international crimes court laws. They’re all tied into global governance.

29:23 mins
LOOK closely. They’re making sure the Provinces end up hating each other. They want civil war. They want to justify bringing in military force. Let’s not give them that. Let’s do everything legal. Even if they are not legal let’s do it safely, and THE CANADIAN PEOPLES’ UNION, FREEDOM 2017 INC. [Not For Profit] is a safe way for everybody.

Please go to http://myfreedom2017.com or http://thepowershift.ca/ and esign free The Convention of Consent to Political Self-Determination and Self-Governance. Use  a cell phone, ipad or computer. Someone in your family likely has access to an electronic device or you can go to a library.

People are starting to know their rights. That was the whole purpose behind this. We put the Governor General on notice and now we see where she stands. It’s up to the people to actually make sure that those rights are listened to.

Please inform others. This is NOT A GAME. This is about the future of every Canadian and the children.

Swearing in ceremony to the Queen

Liberal Party of Canada Leader Justin Trudeau is sworn-in as the 23rd Prime Minister of Canada at Rideau Hall, Ottawa, Ontario, on November 4, 2015

Lawful action to challenge the Constitutionf, and re-establish governance for the people by the people i.e. 100% VETO power to the people. Read more athttps://ourgreaterdestiny.org/2019/01/public-interest-constitutional-class-action-canada/

The following link is a ‘template and action plan’ for people in democratic countries to take lawful, peaceful action. Thank you. https://ourgreaterdestiny.org/2018/12/remedy-to-global-challenges-template-action-plan-and-updates/

Sincerely,
Doreen A Agostino
Without Prejudice and Without Recourse
http://freetobewealthy.net