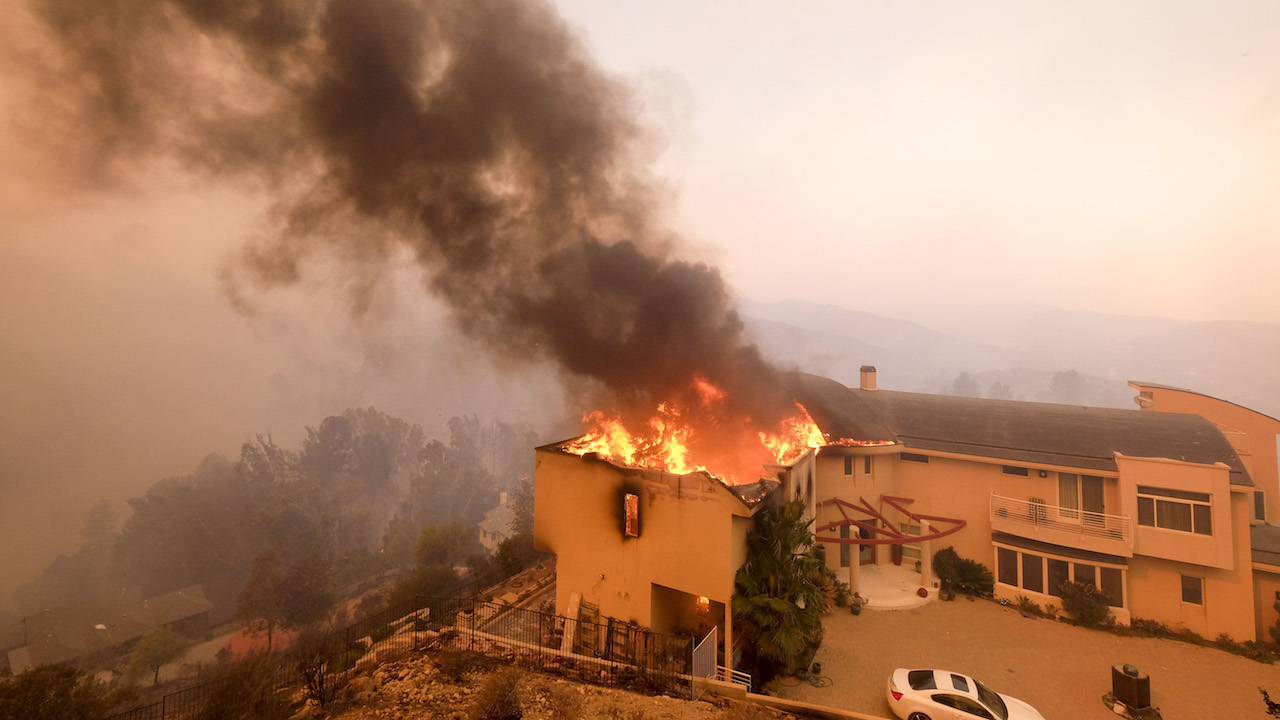 A wildfire burns a home near Malibu Lake in Malibu, Calif., Friday, Nov. 9, 2018. About two-thirds of the city of Malibu was ordered evacuated early Friday as a ferocious wildfire roared toward the beachside community that is home to about 13,000 residents, some of them Hollywood celebrities. (AP Photo/Ringo H.W. Chiu) Do you get the picture?  If not see this second screenshot from Drudge below. And, the perps are still in the process of stealing so many elections (e.g. Fl and AZ) that the need to distract the electorate from their electoral crime spree has become an existential necessity for them.

Now here’s the back story.  The following link lays it all bare. 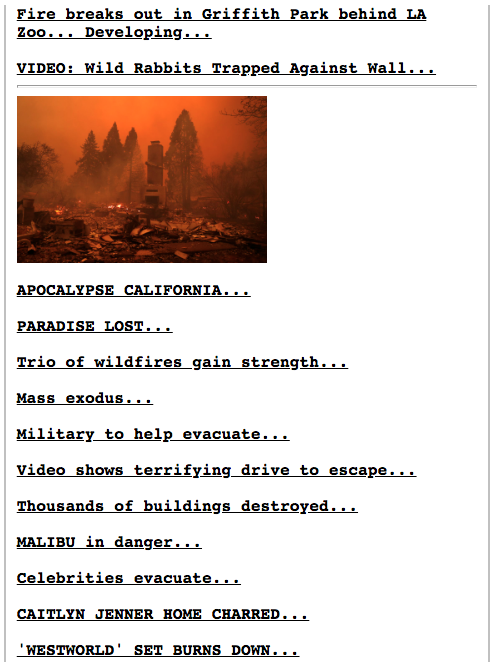 Are you getting the deliberately engineered firestorm drama yet?

For the uninitiated, the Drudge Report was literally set up to hype the stories of the day … or the week … or the month … that The Powers That Be want you focused on.

Only in this way is the body politic not paying attention to the most important stories—like the massive election theft that just took place on November 6, 2018 and continues up to this very day.

There’s no better place in the world to manufacture high drama events than Southern California.

Not only does it get everybody’s attention because of Hollywood and Silicon Valley, they know how to dramatize and sensationalize these terrorist attacks with great effect (and special effects to boot). See: FIREGEDDON: Geoengineered California Firestorms Propagated to Terrorize and Manufacture Consent

It’s very important to note that the Thousand Oaks mass shooting was also carried out for the very same reason.  As follows:

If ever there was a dire need for the power elite to divert the attention of the American People, it’s right here and right now.

They know that, were voters to really comprehend the sheer depth and breadth of the election theft and voter fraud which just took place across America (as it’s still taking place), the groundswell of protest and fury would shut the whole place down.

Florida alone is witnessing the 3 most important elections undergoing a recount.  How, pray tell, did that happen?

Each FL race is gradually moving in the direction of depriving the Republican winner of their victory.  How convenient!

The bottom line is that Democrat election attorneys only show up in droves in Broward County when they know there’s a LOT on the line, and the need to steal an election.

And there really is, a lot on the line, as follows:

There is no more important a swing state where it concerns the 2020 POTUS election than Florida.

Not only is Florida the single most important swing state for 2020, it’s where the Democrats love to steal elections, especially in Broward County.

Whichever party wins the governor seat in Tallahassee this year will determine the outcome for the next U.S. presidential election.

This is exactly why Deep State has ordered their many Democrat election lawyers to Broward County—the voting corruption capital of the country.

For anyone who doubts the unparalleled election theft occurring in Florida at this moment, please consider these recent SOTN posts.

Most of the election rigging and voting fraud took place to steal pivotal seats in the highly coveted House.

This is where the desperate Deep State Democrats really worked hard — 24/7  — to steal every election in sight.  And so they have.

The DEMs knew that if they did not flip the House in a big way, they would face serious consequences for so many scandals yet to be investigated.

The only way to sort-circuit all the House investigations was to steal as many Republican seats as possible, which they have done with extraordinary stealth and success. See: Massive Election Theft Gives Democrats Nearly 40 House Seats KEY POINT: It’s no accident of fate that the CA arson-triggered wildfires are nipping at the properties of the Hollywood elites.  Not only are the stars and celebrities being warned not to leave the NWO reservation, they are being stampeded into the pen of compliance with regard to the CO2-driven Global Warming hoax.

This Democrat criminal conspiracy to steal elections had to happen exactly the way it did.

The nation is ready to deal with this unprecedented election crime wave; not the blue wave that was falsely predicted.

Now the RED tsunami is building to overwhelm and expose the Democrat crime wave responsible for so many rigged elections and fixed votes.

President Trump expressed a sincere intention to reform the electoral process right after he was elected.  It fell flat with almost everyone throughout officialdom.  They all knew how they were beneficiaries of such a corrupt and crooked system.  And they all staunchly resisted it until Trump was compelled to terminate his short-lived initiative to reform the election system.

Well, guess what… like it or not, election reform is now coming to a voting precinct near you—whether you are red, purple or blue.  Real election reform is here and will start right in Florida so that the Democrats will be prevented from stealing the 2020 POTUS election.

The Deep State Democrats aggressively pushed the edge of the envelope — THANK GOD! — and now the show really begins.  Trump’s renowned and redoubtable wrecking ball will, once again, be the star of the show, as it should be; not the engineered California firestorms.