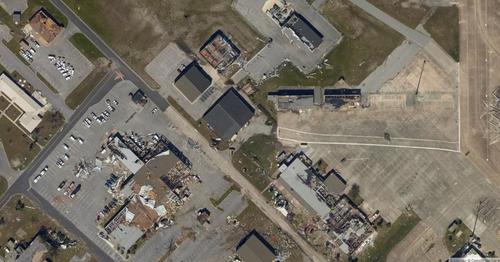 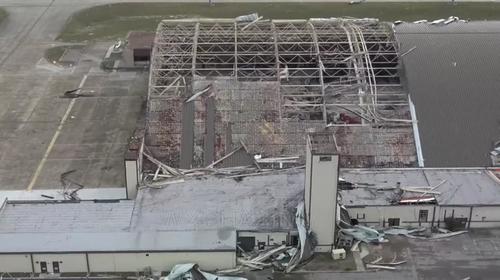 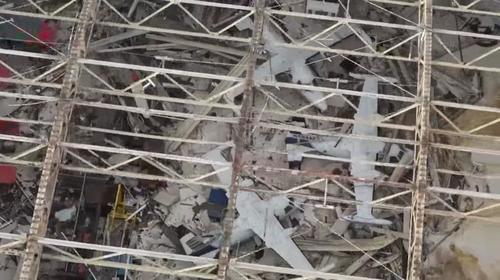 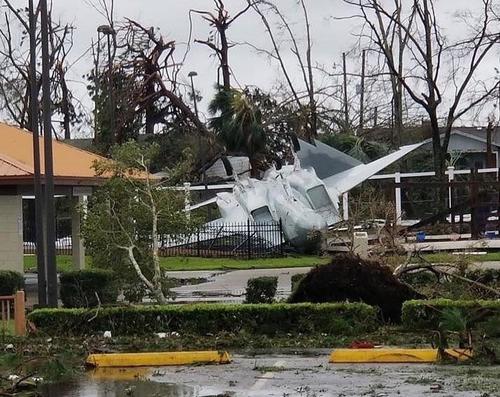 According to the New York Times, Tyndall is home to 55 stealth fighters, “which cost a dizzying $339 million each.” Before Michael hit, the Air Force evacuated at least 33 of the planes to Wright-Patterson Air Force Base in Ohio, however they would not comment on the status of the remaining 22 fighters. 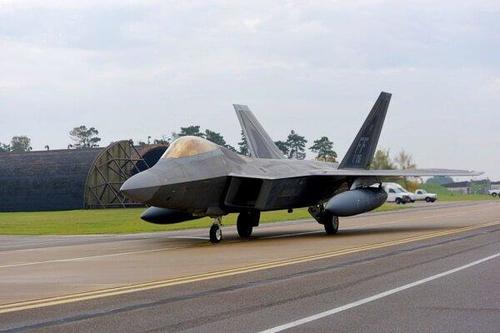 Air Force officials have not disclosed the whereabouts of the remaining 22 planes, other than to say that a number of aircraft were left at the base because of maintenance or safety reasons.

An Air Force spokeswoman, Maj. Malinda Singleton, would not confirm that any of the aircraft left behind were F-22s.

But photos and video from the wreckage of the base showed the distinctive contours of the F-22’s squared tail fins and angled vertical stabilizers amid a jumble of rubble in the base’s largest building, Hangar 5. Another photo shows the distinctive jet in a smaller hangar that had its doors and a wall ripped off by wind.

All of the hangars at the base were damaged, Major Singleton said Friday. “We anticipate the aircraft parked inside may be damaged as well,” she said, “but we won’t know the extent until our crews can safely enter those hangars and make an assessment.” –NYT

F-22s are notoriously finicky and, as the Times puts it “not always flight-worthy.” The Air Force reported earlier this year that just 49% of F-22s were mission ready at any given time – the lowest rate of any fighter in the Air Force. The total value of the unaccounted-for fighters is arouind $7.5 billion.

The eye of Hurricane Michael traveled directly over Tyndall, peeling back stormproof roofs like tin cans and flipping over an F-15 fighter jet display at the base entrance.

When it was over, the base lay in ruins, amid what the Air Force called “widespread catastrophic damage.” There were no reported injuries, in part because nearly all personnel had been ordered to leave in advance of the Category 4 hurricane’s landfall. Commanders still sifting through mounds of wreckage Thursday could not say when evacuation orders would be lifted. –NYT

So one F-22 airframe has been spotted in a roofless hangar at Tyndall. Check out the upper left portion of this photo. No idea if this is flying airframe or a ground trainer or what, but it doesn't look good. More on Tyndall AFB's sad state here: https://t.co/JikiO65eny pic.twitter.com/GlvQ6hnJP7

The last Air Force Base to suffer catastrophic damage was in 1992, when Category 5 Hurricane Andrew slammed into Homestead Air Force Base just south of Miami with winds estimated at 150 m.p.h. Two years later it was reopened as a smaller, Air Force Reserve base.

Tyndall, where about 3,600 airmen are stationed, sits on 29,000 acres that include undeveloped woods and beaches, as well as stores, restaurants, schools, a bowling alley and quiet, tree-lined streets with hundreds of homes for both active-duty and retired military. Video footage captured the ruin there, too: The high-powered storm skinned roofs, shattered windows, and tossed cars and trailers like toys, transforming the normally pristine base into a trash heap. Multistory barracks buildings stood open to the sky. –NYT

“Tyndall residents and evacuated personnel should remain at their safe location,” said Col. Brian Laidlaw on Thursday. “We are actively developing plans to reunite families and plan to provide safe passage back to base housing.”