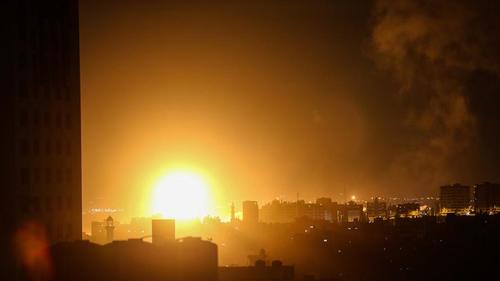 Overnight Friday Israeli bombing of the Gaza Strip, via Reuters

Gazans reported explosions so massive they seemed to turn night into day overnight Friday as Israeli aircraft began pounding the Gaza Strip since the evening in response to Hamas reportedly firing some 30 rockets toward the Israeli city of Sderot.

The Israeli Defense Forces (IDF) said it destroyed 80 Hamas targets in the operation, which had been somewhat expected since a week ago the began staging an unprecedented build-up of forces along the Israeli-Gaza border fence. Sporadic bombings continued through Saturday morning.

A terrorist group operating in Gaza which often acts independently of Hamas called Islamic Jihad implicitly claimed responsibility for the rocket fire, issuing a statement saying it “can no longer stand idle before the continued killing of innocents and bloodshed by the Israeli occupation”.

In the immediate aftermath of the most intense part of the overnight bombings there were no reports of casualties on either side, however, the air raid follows one of the deadliest days in weeks as on Friday 5 Palestinians were reportedly shot by Israeli snipers near the border fence.

Throughout the night Friday Israeli media reported that multiple Israeli settlements in the south of the country had most of their residents staying in bomb shelters. But on the Gaza side it was chaos as frequent explosions rocked the strip and there were broad power outages.

RAW FOOTAGE: This is what it looks like when rockets are intercepted right above your home.
10-12 rockets were fired from #Gaza at #Israel, the Iron Dome aerial defense system intercepted several. pic.twitter.com/L1zx99R55c

And notably Palestinian authorities have blamed the IDF for a direct strike on an Indonesian-sponsored hospital in the northern Gaza strip — which appears to be confirmed in images and video uploaded to social media.

Damage can be seen inside the hospital with damaged ceilings and windows, but there were no reported casualties from what Israeli generally defended as a legitimate retaliatory strike — laying the blame on Hamas.

The IDF official Twitter account issued a statement, though not specifically naming the hospital incident: “Hamas deliberately positioned it next to schools, a hospital & a mosque. For Hamas, nothing is sacred.”

The Israeli military further released footage of massive strike on the “Hamas Security Services Headquarters” while claiming “We warned the building’s occupants to evacuate several times prior to the strike,” according to the IDF spokesperson.

WATCH: We just struck Hamas' General Security Services‘ HQ in #Gaza in response to rockets fired at #Israel. We warned the building's occupants to evacuate several times prior to the strike. pic.twitter.com/Eb5nz80i4f

Though IDF statements have blamed Hamas for the Friday rocket launches, other statements also identified Islamic Jihad as the culprit, which often acts independently of Hamas. But Israel holds Hamas, which has been in control of the strip since 2007, responsible for all acts of aggression not matter who launched the attack.

A separate IDF statement further laid blame on Syria and Iran: “The Assad regime & Iranian Quds Force are behind the Islamic Jihad rocket attack,” according to the IDF spokesperson.

In continuation of demonstrations which have gone largely unabated since last Spring’s “great return march” protests, thousands of Palestinians gathered at five locations along the border fence, where they clashed with Israeli troops reportedly hurling firebombs and other incendiary devices. Israeli security forces responded with tear gas and live fire, and by the end of the day killed five Palestinian demonstrators.