HURRICANE MICHAEL: When officials acknowledge over 1100 are still missing, it’s likely that thousands were killed 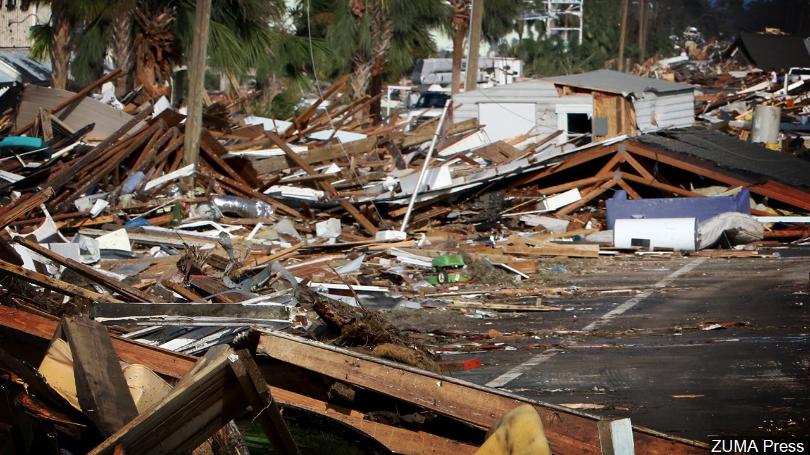 HURRICANE MICHAEL: When officials acknowledge over 1100 are still missing, it’s likely that thousands were killed

By Sean Breslin
The Weather Channel

One week after Hurricane Michael made landfall on the Florida Panhandle, more than 1,000 people remain missing, a rescue organization official said.

In an interview with Reuters, CrowdSource Rescue co-founder Matthew Marchetti said at least 1,135 Floridians are still unaccounted for. However, many of those still listed as missing could be with friends or family elsewhere, or they might have fled the storm and didn’t contact loved ones to inform them of their whereabouts, the report added.

At least 34 deaths have been blamed on the powerful storm – 24 in Florida, three in North Carolina, one in Georgia and six in Virginia.

(MORE: How to Help the Victims of Hurricane Michael)

In case you don't have a scope on how hard some places were hit by Hurricane Michael, heres a before and after pic for you. #TWDFamily #TWD #HurricaneMichael #MexicoBeach pic.twitter.com/yPZlCkWBLG

In areas like Mexico Beach and Panama City, many chose to stay in their homes and ride out the hurricane. Friends and family members descended on these towns after the storm passed, only to find decimated homes and, in many cases, no sign of their relatives.

“Unfortunately there are going to more fatalities than people want to admit,” said State Rep. Halsey Beshears, whose district includes several of the counties hammered by Michael. “If you stayed in Mexico Beach, there’s no way you could have survived. I think more fatalities are going to show up every day.”

Here’s a closer look at the biggest stories in Florida as the state recovers from the storm:

Vow to rebuild Tyndall: Contrary to a rumor, the heavily damaged Tyndall Air Force Base near Panama City will be rebuilt, Florida Sen. Bill Nelson told WMBB-TV in an interview Tuesday. The rumor being circulated said the base might be closed permanently closed, as Homestead AFB was in the wake of Hurricane Andrew in 1992. “Let me assure you that Tyndall AFB will be rebuilt,” Nelson told WMBB. “It will become a modern air force base that will be an example of all future air force bases.”

(PHOTOS: Before and After Images Show Michael’s Devastation)

Leaving Mexico Beach for good: Some homeowners along the coast said they’ll rebuild their lives, but not in Mexico Beach. “I couldn’t get nothing for this land now,” Joe Bush, who has lived in Mexico Beach for 19 years, told CNN.com. “People gonna be scared to death to come down here to buy and invest money. So we’re just going to leave it.”

Looters arrested in Bay County: Officials told the News Herald that armed looters are targeting homes and businesses damaged by the storm, and police are making about 10 arrests every night. “I must’ve been so exhausted from everything in the past days I didn’t hear them come in,” Victoria Smith, who was targeted in her home, told the News Herald. “They just snatched my purse out of my hands and ran. … It was all we had.”

(MORE: The Victims of Hurricane Michael)

Residents flock to hurricane-damaged motel: With no place to go, many Panama City residents who lost their homes have turned to the damaged American Quality Lodge just so they have a roof over their heads. Some have built makeshift tents in breezeways as a refuge from the daytime sun. Others say they’ve also been targeted by looters who descended on the motel and took money, food and even their clothes.

Cell service still spotty: Calling loved ones after the storm is one of the top priorities of survivors, but for many, cell service still has not been restored, making that act far more difficult. Gov. Rick Scott said phone companies have been far too slow to restore service to battered areas. Verizon’s network finally returned for Panama City customers on Tuesday, and the company said it will give all customers a three-month credit in Bay and Gulf counties.

The previous address is incorrect. Our food truck is at 631 W 15th St. We are giving out free food curbside until 6pm. #ScatteredSmotheredandRecover pic.twitter.com/CVDZVzwH2B

No help to red tide: Hurricane Michael failed to break up a patchy and toxic algae bloom that has lingered in the Gulf off Florida’s coast for the last year, experts said Monday, meaning the red tide outbreak could continue to cause problems in the weeks ahead. Hurricanes can break up algae blooms, but they also drop fresh water and increase nutrient-rich runoff from land, which can make them worse, said Robert Weisberg, a professor of physical oceanography at the University of South Florida. Michael blew red tide at the water’s surface into shore, but deep ocean currents that have been feeding the bloom since the summer also have persisted, he said. “The factors that contributed to red tide outweighed the ones that would reduce it,” Weisberg said.

Poor residents hit hardest: Many of those who rode out Michael said they did it because they had no way to evacuate. Lynn Haven resident Mary Frances Parrish said she didn’t have a working vehicle or a place to go, so she stayed in her home and endured the worst of the storm. “People are sending stuff in,” she said. “I’ve got plenty of water, I’ve got cold drinks, I’ve got plenty to eat. It may be right out of the can, but it’s plenty to eat. As long as you can have plenty to eat and drink and stay in good spirits, you’ll make it.”

Bay County schools destroyed, closed indefinitely: With widespread damage to the county’s schools, officials told CNN.com that they have no idea when 26,000 students will return to class. “I would say every single school in Bay County has some type of damage, some more extensive than others,” Steve Moss, vice chairman of Bay District School Board, told CNN.com. “Some it’ll probably take weeks or months to get online. Some it will take years. The only thing left of some of our schools … is the foundation.”

Two prisons damaged: Nearly 3,000 inmates have been evacuated after two prisons were damaged during Hurricane Michael. The Department of Corrections said Saturday that the inmates were evacuated from the Gulf Correctional Institution and Annex and a portion of Calhoun Correctional Institution. The facilities sustained significant roof damage, as well as damage to infrastructure critical for security. Three prisons – the Gulf institution and annex, the Gulf Forestry Camp, and Panama City Work Release Center are closed until further damage assessments are made. No inmates or staff members were injured. The agency says inmate locations will be updated on its website within 24 hours.

Major damage inland: Much of Marianna and surrounding Jackson County suffered a huge blow from Hurricane Michael, even though they are nearly 60 miles from the coast. The Tallahassee Democrat reported that the storm ripped off roofs, collapsed brick facades of buildings and felled countless trees and power lines. Electricity was out for the entire county, and the water system stopped working. More than 250 people remain in Jackson County shelters, and power remained out to nearly 80 percent of the county’s homes and businesses Tuesday morning, according to PowerOutage.us.

Calhoun County still completely in the dark: Wednesday morning, 100 percent of the county’s customers still lacked power, according to PowerOutage.us.

Enormous crop loss expected: The state might have lost as much as 90 percent of its cotton crop to the storm, as well as 40 percent of its peanut crop, initial estimates from the University of Florida’s Institute of Food and Agricultural Sciences revealed.

– Information from the Associated Press was used in this report.