HURRICANE MICHAEL: A Brazen, Purposeful and Catastrophic Attack on the Right! 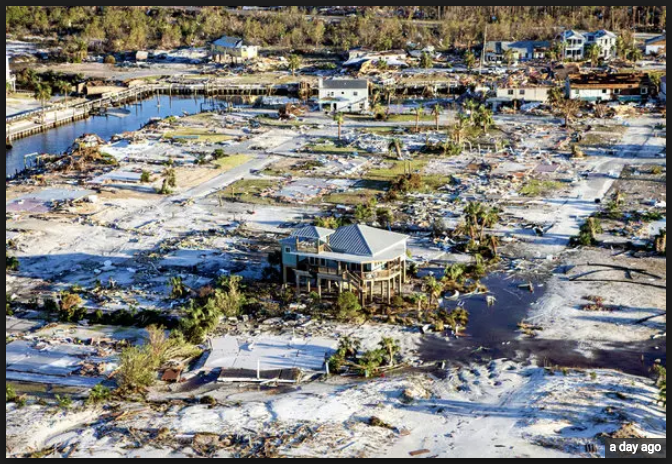 Utter devastation left in the wake of Hurricane Michael

HURRICANE MICHAEL: A Brazen, Purposeful and Catastrophic Attack on the Right! In this image made from video and provided by SevereStudios.com, damage from Hurricane Michael is seen in Mexico Beach, Fla. on Thursday, Oct. 11, 2018. (SevereStudios.com via AP)

The Florida Panhandle was just attacked by weather weaponry so deadly and destructive that it will never be the same.

In other words, this massive false flag superstorm attack by globalist-controlled geoengineers completely changed the landscape of North Florida, as it irreversibly altered the electoral calculus of the entire state for the midterms. MIDTERMS: It all comes down to Florida!

That was just one purpose behind Hurricane Michael — a highly calculated scheme to steal the midterm elections in Florida. See: HURRICANE MICHAEL: A Geoengineered Superstorm Targeting Tallahassee and Florida Panhandle—Why!

You see, the Panhandle is Republican ruby red.  It’s as red as any place in the 50 states.  The Soros-funded geoengineers knew that all they had to do was aim their massive weather weapon Michael between Tallahassee and Pensacola and they could then quickly eliminate a large swath of the Right-leaning voters.

If there is a rallying cry for the Right to remember, it is this.  “Remember Superstorm Michael!”  CALL TO ACTION: The Right has been attacked in Florida (Video)

What the New World Order globalist cabal just did with this shocking attack was to conduct an “October Surprise” of epic proportions.

KEY POINT: TPTB had their geoengineers manufacture what was essentially a “hurricane tornado” of the same technological type and raw power as Hurricane Andrew.  It’s common knowledge among superstorm researchers that thousands of people died during and after that cataclysmic hurricane that hit Homestead Florida in August of 1992.   The vast majority of those deaths, as well as the many serious injuries, were never recorded by the state nor reported by the mainstream media.  That’s the way it always is so that government doesn’t look bad. See: Hurricane Michael and the US Govt Coverup (Video)

Fast forward to October of 2018 and we are now seeing a similar scenario playing out in the wake of the utter devastation left by Michael.

Yes, this was undoubtedly a transparent attack by the globalist Left against the patriotic Right.

KEY POINT: The Panhandle residents are well known for being tough people who don’t like vacating the premises when these storms coming rolling through.  They have been very fortunate with this response… … … up until now.  This stealthy geoengineered superstorm snuck up on them as it did all of us in the Alt Media.  We have watched these manufactured storms for decades now and were also deceived into believing Michael would be just another hurricane.  Well it wasn’t.  In point of fact, this megastorm turned out to be a sneak attack that caught countless folks completely unaware and therefore unprotected.  They were killed where they stood, sat and slept without a chance of saving themselves once the 155mph winds bore down on them or the storm surge engulfed their living quarters.  Then, hours later, Michael was still a raging Cat. 3 at 125mph in South Georgia and Alabama.  This is called premeditated mass murder with an extremely dangerous weather weapon.

Actually the best way to understand the true enormity and profundity of this horrific event is to understand it as a 9/11-level false flag operation.

When viewed through this lens, it becomes apparent that TPTB have no regard whatsoever for human life, especially innocent, hard-working patriotic Americans who are nationalists at heart.

Just like the state-sponsored terrorist attacks of 9/11, this act of weather terrorism was designed to shock and awe a large demographic into submission. See: OCTOBER SURPRISE 2018: A Whole Month of “Shock and Awe”

Many homes in Mexico City, Florida are simply gone.

KEY POINT: How can these Florida residents possibly cast a vote on November 6…or on any day between now and then?  Understand that numerous victims no longer have homes.  Many no longer have jobs.  Others are without money… or food… or clothing. How, then, will they cast a vote in the midterm elections?

After Brett Kavanaugh was finally confirmed by the full U.S. Senate, the Democrat Deep State resolved itself to get back at the Right. See: RED ALERT: Globalist Cabal Needs A Major False Flag Attack Between Now And Election Because of Red Tsunami <—This is the false flag attack that SOTN warned about.

You knew that the Democrat decision-makers and power elite would conspire to do something quite abhorrent and shocking.  And so they did!  If for no other reason than to vent their rage about their corrupt leaders in the Congress and criminal attorneys being exposed for their glaring perfidy and outright sedition.

Not only did the Kavanaugh fiasco serve to galvanize the Right to vote like no other midterm election ever, it has unified the patriot movement like never before.

So, the globalists reacted to their self-created debacle by taking out a whole bunch of Republican and Independent voters in North Florida.  They even took out an unknown number of Blue Dog Democrats are sure to vote a straight GOP ticket this year.

This is where things are getting real nasty; however, behind the scenes so that no one will see the unparalleled outrage like everyone witnessed with the attempted killing of Kavanaugh.

Tallahassee Mayor Andrew Gillum is the George Soros-funded horse who the globalists are determined to put in the Governor’s mansion.

Congressman Ron DeSantis is the Republican nominee who would have been a sure win had every liberal billionaire in Florida and beyond not adopted the extremely green kid from FAMU fame.

Therefore, the serious problem that now exists is that DeSantis has just lost a LOT of avid supporters throughout the Panhandle.  The political reality is that he desperately needs each and every voter this year.  And he just lost a ‘million’.

For the uninitiated, whoever wins the Florida governor’s race can greatly influence the final outcome of the 2020 U.S. presidential election.  If Soros succeeds in stealing the election for Gillum, he will do everything in his power to steal the 29 electoral votes for the 2020 Democrat POTUS candidate.

Everything — EVERYTHING — is riding on this FL election.

Now the readers know just one reason why they geoengineered Hurricane Michael and then slammed it into the Panhandle.  Which then continued its path of unparalleled death and destruction on to South Georgia and Alabama, also very red counties. See: MUST SHARE: “Hurricane Michael” Has Been Weaponized (Video) Michael’s destruction: ‘All I can see is devastation’

Bottom Line: “Remember Superstorm Michael!”   And don’t ever forget it until TPTB who ordered the hurricane hit are arrested, prosecuted and punished to the fullest extent of the law.

Action Plan: Every patriot in the USA ought to send this “Open Letter” to Governor Rick Scott.  Without the million voters in the Panhandle casting their votes, not only will Gillum win the critical governorship, Scott himself will lose the crucial U.S. Senator race.  Email, snail mail, carrier pigeon, etc.; just send this letter to the Florida governor before it’s too late—thank you!