FALSE FLAG BOMB SCARES: Who’s doing it and Why? 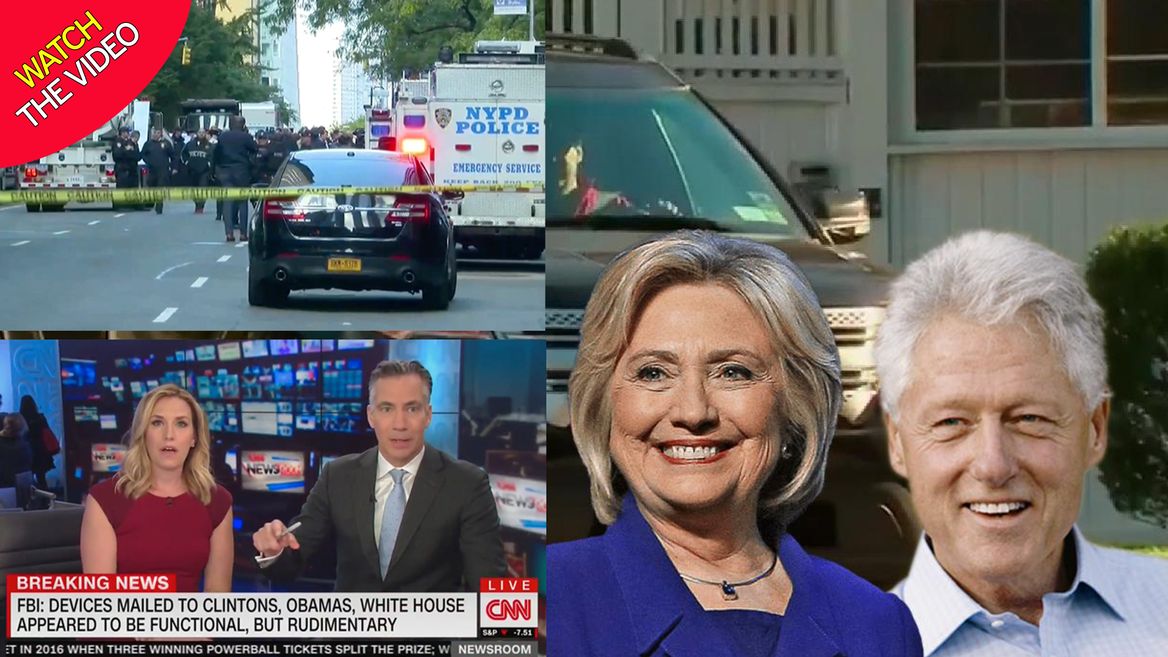 Mainstream Media milking these false flags bomb scares for all they can before the midterms.

FALSE FLAG BOMB SCARES: Who’s doing it and Why? How’s this for a nice puff piece by The New York Times about their favorite con artist and crazymaker.

“According to Laurence Tribe, “Every single alleged recipient of the bomb packages — Soros, Obama, Clinton, Brennan, Waters, Wasserman-Schultz, Holder, CNN — has been a target of Trump”.  And, yet, not a single one exploded.  Now that sounds like a C.I.A. false flag bomb scare.  What better way is there to change the topic away from the Deep State-contrived caravan and drum up immediate sympathy for George Soros—the real villain behind the Honduran invasion.  This is exactly the type of black op they do right before the most consequential midterm election in U.S. history.”

Really, the Democrats have totally lost it.  So unhinged are they that they’re now sending bombs and other incendiary devices to themselves.  And then blaming the Right, particularly Trump for the dastardly deeds.

In their sheer desperation to win the midterm elections, the Left is running a nationwide bomb scare scheme in order to stampede as many Democrat voters as possible into the November 6th poll booth.

Clearly, the DNC knows that their own predicted (some say fabricated) blue wave will soon be overwhelmed by the gathering RED tsunami.  And it’s true: the Kavanaugh fiasco alone has galvanized the Right to vote with a vengeance like no midterm election before.

Because of this grim reality for the Democrats, they feel they had no choice but to pull off an over-the-top stunt.  And boy did they!  However, big voices on the Right have nailed them all over the place. What’s critical to understand is that the current spate of bomb scares directed at the top liberal leaders — George Soros, Barack Obama, Hillary & Bill Clinton (as well as CNN) — is an extremely cynical ploy to arouse sympathy for these tragic figures.  In so doing, they hope to rally the Obamabots and Clintonistas, Berniacs and Soroseviks to completely take over the US government post Election Day.

Of course, like every false flag operation, these bomb plots are designed to instill a LOT of fear throughout the leftwing electorate to get them to vote en masse.  If the deranged Democrat voters don’t show up, the House and Senate will not be flipped.  And flipped they must be, if the blue VIPs are to prevent their own political demise.

Really, think about it, what better way to whip up the Left than to present the illusion that their ‘fearless leaders’ are under violent attack.  Who else would perpetrate such an obvious hoax but the deceitful Deep State Democrats?

Much more can be written about these transparent false flag bomb threats against the icons of the Left, but all that needs to be understood is they are doing this to each other.  Yes, they may even find a patsy out there who is some zealous diehard Trumpster, but mind-control programmed hoaxsters on both sides are being triggered all over the place right now.

Deep State Democrats had these bomb scares planned for many months.  Their political [MIS]calculation was that a serious threat dramatically demonstrated against the leaders would inflame the base and beyond.  What they failed to realize is that their obvious conspiracy to blame the Right would unravel in real-time.  And so it has—BIG time!

When the son of George Soros is conscripted to enter the fray, you know that the traitorous father is in Deep State doo-doo. See: FALSE FLAG ALERT: Soros Family Blames Trump For Bomb Scares.  After all, Soros the father is directly responsible for the invasion caravan of illegal aliens who are crashing the Mexican border. See: Folks, it’s a full-scale illegal alien invasion just like they destroyed Europe!

Apparently, Soros felt the need to abruptly change the national conversation from his own seditious acts against the POTUS and treason against the American Republic.  Everyone has been catching on to their juvenile tricks lately so the DEMs had to do something quite distracting and shocking.

Who doesn’t know by now that international criminal George Soros wants to turn the USA into a communist superstate together with Mexico and Canada? (Remember the new “Amero” currency and planned “North American Union”.)  Well, the ongoing Honduran Invasion represents a big piece of that twisted globalist agenda. See: HONDURAN INVASION: Staged by Cultural Marxists to Further Destroy American Society How else does a caravan like this assemble and move across countries except by purposeful design.

Unfortunately, because of the highly coordinated cover-up by the mainstream media (MSM), the true extent of Soros’s perfidy is not well known.  Were the electorate to be aware of the treacherous acts carried out by Soros & Company against the American people, the perps would have been taken off the streets by law enforcement—YESTERDAY!  The level of complicity of George Soros, alone, regarding this rapidly intensifying “Caravan Invasion” would be enough to banish him from this country… just as Russia barred him from re-entry.

There’s still a couple of weeks between now and Election Day.

The Powers That Be on the Left will clearly do everything in their power to change the current voting dynamic.  Look what they already did to the heavily Republican Panhandle with Hurricane Michael.

In view of the growing RED tsunami coming to a voting booth near every American, the globalists know their New World Order agenda will be further undermined by a decisive victory for the Republicans.  Hence, they are desperate beyond anything the body politic has ever seen before.

The best thing that can be done is for patriots everywhere to respond to each criminal conspiracy to smear the Right, with corruption and crimes committed by the Left, with an unshakable resolve to vote them out of office in record numbers.

Once the Democratic Party has lost a sufficient amount of power in government, it can be disbanded forever.  The Democrats can never again be permitted to exercise power in the United States of America.  Their numerous conspiracies to commit treason and many other crime waves have disqualified them to occupy any public office—CASE CLOSED.

As for the likes of George “Schwartz” Soros, Barack Hussein Obama, Hillary Rodham, Clinton, William Jefferson Clinton and other high-level career criminals operating under the umbrella of the Rothschild Crime Syndicate, there’s only one alternative. As follows:

Special Note:  Because of the increasing number of false flag operations being executed by Deep State — both real attacks, obvious hoaxes and hybrids — it’s impossible to know if these bombs were even sent as reported by the MSM.  What it comes down to then, is that the power elite can make up stuff out of thin air and have it reported as fact, when in reality it’s utter fiction.  This undoubtedly happens all the time now and We the People know it as FAKE NEWS.

Editor’s Note: SOTN has written several articles predicting that the Deep State Democrats would do some very stupid stuff during October and right up to the election.  For example: The October SURPRISES of 2018 to be Preceded by a September SHOCK & AWE!  Then there was this post on the purge of the Right by the Big Tech titans before the election: Something Wicked This Way Comes…Between Now And Election Day  There was also this prescient piece about the OCTOBER SURPRISE 2018: A Whole Month of “Shock and Awe”.  We’re not saying we told ya so; rather, we’re reposting these so that folks can comprehend what the heck is happening right now.  For it’s only going to intensify until Nov. 6, as we cogently point out in each of these exposés.  A false flag mass shooting is definitely on the way!