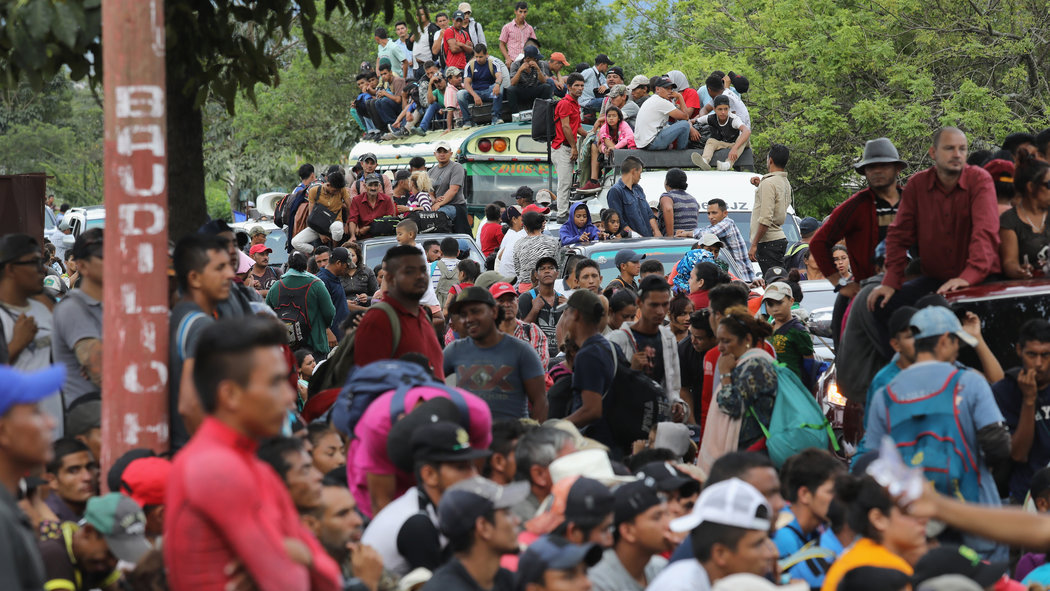 In English, people might say “Yahoo! Santa is coming tonight.”

In a video showing mostly military age men on their way to storm America’s southern border, well organized activists in the ‘March-of-the-made-to-order-Migrant Caravan’—speeding truckloads of them— seem to be yelling out: “Yuju!”

They are being trucked to the U.S. border so fast they may even get here AHEAD OF THE MIDTERMS.

Hey check out that HONDURAN FLAG they are flying off the back of that truck.

I thought they were fleeing that violent nation? 🤔🤔 pic.twitter.com/hpAUKnQwmu

Promises of what their invasion of America through its southern border will do for both countries is what’s making them so “Yuju! joyous.  When they force their way through the border, that pig called “capitalism” will be a reeking corpse for once and for all; the promise of Obama’s Fundamental Transformation of America made true.

Notice in the video how even travelling down highways in trucks at breakneck speed, some yob is still holding up the Honduran flag at the back of the speeding truck?

While the Honduran flag flies proudly from a truck bringing invaders in to storm the U.S. border, caravan protesters painted a swastika on an American flag before burning it on the street in front of the American embassy, in Tegucigalpa, Honduras,  on Friday.

But it is the Honduran flag flying from the back of a truck; that the passengers in the trucks are primarily male from Guatemala, El Salvador and Honduras with Bangladeshis, ISIS and former deportees making comebacks after U.S. deportation thrown into the mix,  that tell the true tale of what this Central America Caravan is really all about.

This is not a desperate migration of poor people looking for a better life for their children in the USA. It is a desperate attempt by Democrats driven into exile in the 2016 presidential election to make President Donald Trump look like a monster willing to separate children from their parents at the border,  in time for Midterm Elections.

The speeding, flag-decked truck that can be seen in the video is a symbol of a False Flag operation, organized by Deep State members of the about to be forsaken Democrats.

That’s how truly desperate they are.  Even more so than the ‘migrants’ they’re sending.

It is the October Surprise the Democrats took up to replace lost face from their vicious but unsuccessful efforts to block the Brett Kavanaugh Supreme Court nomination;  thousands of Christine Blasey Fords on the march against America.

Ragtag as the caravan Yujus may appear, they’re the Democrats’ last stand to reclaim power and control; the other shoe dropping on the deplorables’ hopes.

When President Trump identified his suspicions of the caravan’s possible relationship to the Democrats, Fake News media moved in swiftly to say he had no proof.

Who needs proof when common sense has already provided it?

“President Trump expressed in a series of tweets Monday morning that the caravan is a national emergency and warned that “criminals and unknown Middle Easterners” could be in the caravan as well. (Breitbart, Oct. 22, 2018)

“Sadly, it looks like Mexico’s Police and Military are unable to stop the Caravan heading to the Southern Border of the United States. Criminals and unknown Middle Easterners are mixed in. I have alerted Border Patrol and Military that this is a National Emergency. Must change laws!” Trump tweeted.

“Every time you see a Caravan, or people illegally coming, or attempting to come, into our Country illegally, think of and blame the Democrats for not giving us the votes to change our pathetic Immigration Laws! Remember the Midterms! So unfair to those who come in legally,” Trump wrote.

Watch for the drama and on-the-road theatre to pick up as we close in on Midterms.

If the storm catches them up today,  don’t count on the media saying they shouldn’t have been out on the march during a hurricane when they can run screaming headlines instead,  claiming: “It’s Donald Trump’s fault!”

The Democrats want would-be Republican voters to throw in the towel on Midterms.  They want them to think that it’s not worth getting out to vote because the Democrats are going to win anyway.

The caravan headed for the border for Election Day is not carrying thousands of poor migrants looking for safe space for their women and children.  It’s carrying to the the border the rowdy, paid activists of the Democrat Party trying desperately to pull off yet another fast one against the good people of the U.S.A.