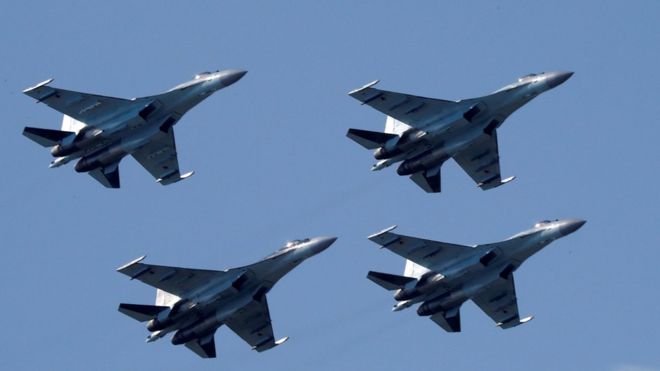 Chinese anger at US sanctions for Russian weapons purchases

China has told the US to withdraw sanctions on its military over purchases of Russian jets and missiles or “bear the consequences”.
The US says China has contravened US sanctions on Moscow introduced over Russian actions in Ukraine and alleged interference in US politics.

Beijing has not joined in the sanctions imposed on Moscow by the US and its Western allies since 2014.

China is fast becoming a manufacturer of sophisticated weaponry in its own right but it remains eager to buy advanced Russian weaponry, especially air defence systems and combat aircraft.

Moscow – after years of some reluctance – is now more willing to transfer this sort of weaponry to Beijing.

What other reaction has there been?

The BBC’s China correspondent, Stephen McDonell, says that while it seems like strong language from the foreign ministry spokesman, just how angry Beijing is will become clearer when they say what their retaliation will be.

Russia has also criticised the sanctions on the Chinese military, warning the US against “playing with fire”.

“It would be good for them to remember there is such a concept as global stability which they are thoughtlessly undermining by whipping up tensions in Russian-American ties,” Deputy Foreign Minister Sergei Ryabkov said in a statement.

US officials have said the sanctions are aimed at Russia, and are not intended to undermine other countries’ defence capabilities and similar action against other countries could be considered.

Are sanctions a fading weapon?

The target of these sanctions is Russia rather than China but the impact is likely to be to encourage co-operation between Beijing and Moscow who, to a large extent, already share a worldview and resist what they see as Washington’s efforts to throw its weight around.

China’s developing military relationship with Russia was underscored by its participation at the recent Vostok exercises and it is not going to halt sophisticated weapons purchases from Russia.

The US move could just deepen the already tense trading relationship with Beijing. Sanctions may be a good way of registering US displeasure and causing Russia economic pain, but they may well not produce the desired outcome, a change in Russian policy.

The world’s economic balance of power is slowly changing – sanctions imposed by a once-dominant US is a weapon that is gradually weakening and some believe their overuse could accelerate this process.

Who is affected by the sanctions?

The EDD and Mr Li have been added to a Blocked Persons List, meaning any assets they hold in the US are frozen and Americans are “generally prohibited” from doing business with them. 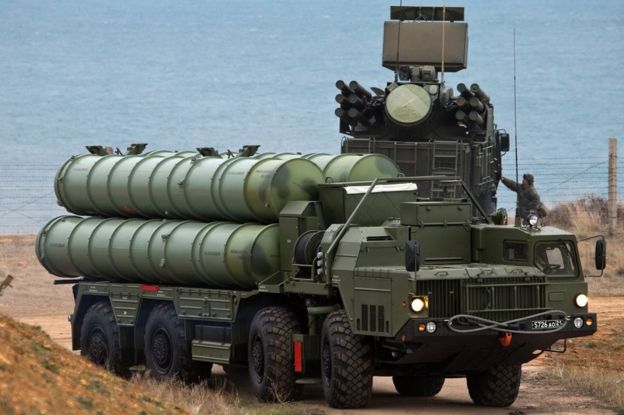 Furthermore, the EDD is denied export licences and excluded from the American financial system.

What other US-China tensions are there?

The two countries are currently embroiled in an escalating trade war.

President Donald Trump has imposed three waves of tariffs on about 40% of China’s roughly $500bn of exports to the US and has also threatened further tariffs.

China has responded with tariffs on about $110bn of US exports. In 2017 China imported about $130bn of goods from the US.

There have also been some tensions over disputed territory in the South China Sea, which is subject to overlapping claims by six countries.

China has been accused of militarising the sea to support its vast claims.

The US says it is “committed to a free and open Indo-Pacific” and has sailed warships close to artificial islands built by Beijing to challenge what it sees as Chinese efforts to restrict freedom of navigation in a strategically important area.