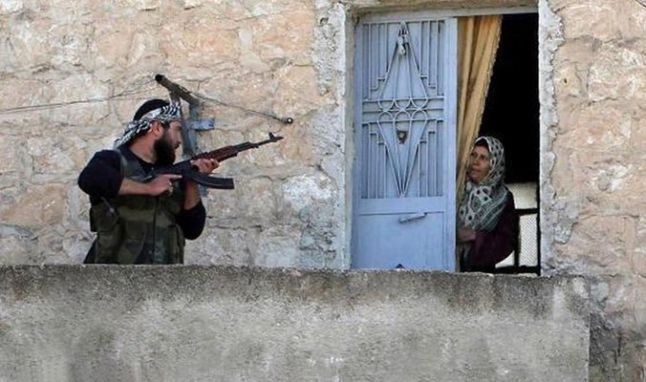 The United Kingdom is resettling Al Qaeda’s Syrian medical unit, called the “White Helmets,” as “refugees” in UK. The White Helmets organization is funded by UK’s MI6 and America’s CIA, and is headed by Raed Saleh, who was prohibited from visiting the US because he’s a terrorist. These jihadists won’t just have UK honors (and they already have: a Hollywood Oscar-winning ‘documentary’ full of lies about how ‘heroic’ the White Helmets are), but, presumably, they’ll also obtain UK citizenship.

“The Syria White Helmets Exposed as US UK Agents” is a 4-minute video about them. It’s an entirely accurate representation regarding their personnel and funding-sources. It even shows Al Qaeda in Syria executing a civilian; and, then, White Helmets — this ‘humanitarian organization’ — collecting his corpse just seconds later, as part of their ‘heroic’ work, for the US-and-allied invaders of Syria. The invading nations use Al Qaeda’s Syrian branch to train and lead ‘our’ boots-on-the-ground fighters to overthrow Syria’s secular, non-sectarian, Government, which is headed by the secular Shiite Bashar al-Assad. These US-Saudi-Israeli-allied proxy fundamentalist-Sunni-jihadist boots-on-the-ground do the actual dirty-work of killing people for their sponsoring aristocracies. In this particular instance the executioners are al-Nusra itself, which is Syria’s Al Qaeda branch, and in that video they have eliminated yet another person that the US and UK aristocracies want to be eliminated. The great independent investigative journalist Vanessa Beeley has written numerous articles (such as this) providing detailed documentation of how US and UK billionaires have funded the propaganda selling throughout the world the campaign to overthrow Syria’s Government. Though the invading countries call this a ‘civil war’ in Syria, it’s actually a war that wouldn’t even exist but for the work, since 2009, of CIA and MI6 and those others from Western ‘democracies’, which are making suckers of their own nations’ citizens — Americans, British, and citizens of the other invading countries — via their lying ‘news’-media, none of which will publish the truths that this 4-minute video is showing. So, the aristocrats’ publics are kept ignorant of such reality.

A US State Department document dated 22 October 2010 — prior to the “Arab Spring” — and sent to all US Embassies in the Arab world, funneled funds to the Muslim Brotherhood and other “moderate Islamists” who sought regime-change, instead of “stability” there.

On 17 April 2011 (which was before Jeff Bezos owned) the Washington Post headlined with shocking honesty “US secretly backed Syrian opposition groups, cables released by WikiLeaks show”, and reported on the “Movement for Justice and Development [MJD], a London-based network of Syrian exiles. Classified US diplomatic cables show that the State Department has funneled as much as $6 million to the group since 2006 to operate the satellite channel and finance other activities inside Syria.” The cables had just been published by Wikileaks. Furthermore, “the cables indicate money was set aside at least through September 2010.” Obama had not cut off George W. Bush’s anti-Syrian aggression. There was no doubt that MJD was a regime-change-in-Syria organization: “The group, which is banned in Syria, openly advocates for Assad’s removal. US cables describe its leaders as ‘liberal, moderate Islamists’ who are former members of the Muslim Brotherhood.”

The joint US-NATO secret training camp in the US air force base in Incirlik, Turkey, began operations in April-May 2011 to organize and expand the dissident base in Syria. Since then, in addition to Col. Riad al-Assad [no relation to Syrian President Bashar al-Assad],several other high-ranking Syrian military and intelligence officials have been added to operations’ headquarters in the US base. Weekly weapons smuggling operations have been carried out with full NATO-US participation since last May. The HQ also includes an information warfare division where US-NATO crafted communications are directed to dissidents in Syria via the core group of Syrian military and Intelligence defectors.

One Wikileaked document from the private-CIA firm Stratfor on 7 December 2011 reported the agent’s extensive discussions with the Pentagon and allied foreign militaries, and said that Special Operations Forces “teams (presumably from US, UK, France, Jordan, Turkey) are already on the ground [in Syria] focused on recce missions and training opposition forces. One Air Force intel guy (US) said very carefully that there isn’t much of a Free Syrian Army to train right now anyway.” (In other words, finding non-jihadists to take down Assad was proving to be far more difficult than had been anticipated.) Creating a Syrian civil war was then just a hope, and, “the idea ‘hypothetically’ is to commit guerrilla attacks, assassination campaigns, try to break the back of the Alawite forces, elicit collapse from within.” But that hoped-for sectarian split-up of Syria likewise failed to materialize. Syria’s Government was too widely supported by the population. Consequently, US President Barack Obama made one other attempt to use the Muslim Brotherhood to get the ‘rebellion’ going. But this effort also failed. So, by the time of December 2012, Obama finally turned to al-Nusra. Here’s how that happened:

On 10 December 2012, the Telegraph bannered “Syrian rebels defy US and pledge allegiance to jihadi group” and reported that, “Rebel groups across Syria are defying the United States by pledging their allegiance to a group that Washington will designate today a terrorist organization for its alleged links to al-Qaeda. A total of 29 opposition groups, including fighting ‘brigades’ and civilian committees, have signed a petition calling for mass demonstrations in support of Jabhat al-Nusra, an Islamist group which the White House believes is an offshoot of al-Qaeda.”

As a direct consequence of that decision by the ‘moderate rebels’ whom the US was backing, Obama committed his Administration to use Al Qaeda in Syria, al-Nusra, to train and lead the ‘moderate rebels’ (all jihadists other than ISIS), America’s proxy-fighters to bring down Syria’s Government. Obama continued that policy to the very end of his Presidency. His goal was to replace Assad with a dictator who would be controlled by the Saud family (who own Saudi Arabia), which family the CIA has been trying, ever since 1949, to place in control over Syria. Obama’s successor, Donald Trump, continues this policy.

What is more despicable than this treachery, from our own governments, in our own era? Countries are being invaded by ours; these invaded countries haven’t invaded nor even threatened ours, but nonetheless we accept these invasions by ‘our’ governments and pay taxes to make these murderous invasions possible. Such aggressor-governments as ours do not actually represent us, but we tolerate them, decade after decade, as they slaughter people abroad, and blow up the US federal debt to pay for the aristocracy’s voracious and vicious operation of global conquest, which they call ‘humanitarian’, though they know it’s the opposite.

These governments represent only their respective aristocracies, the controlling owners of their international corporations. Like every aristocracy, each aristocracy portrays, as being ‘the nation’s enemy’, not itself (that aristocracy), but whatever foreign governments the given aristocracy aims to conquer. Each invading country’s ‘news’-media play differing segments of their own domestic population — Blacks, Whites, men, women, heterosexuals, homosexuals, etc. — against each other, so that none will blame the actually tiny number of aristocrats, who, behind the scenes, control that vile government and produce the problems (such as the bombings and jihadists that have produced the refugee-crisis in Europe) and the enormous ongoing injustices throughout the world.

The US and UK governments, and their Saudi and Israeli and other allies, don’t care about the welfare of their respective publics — the public who pay the taxes to support the given aristocracy’s invasions and military occupations and also its coups (that one having cost US taxpayers at least $5 billion and destroyed the target-country).

Even after lying (or “deceiving”) their publics into invading and occupying Iraq in 2003 on the basis of lies, and then repeating this in Libya in 2011 on the basis of lies, and then repeating it yet again now in Yemen on the basis of lies, the public seemingly don’t learn, they don’t repudiate all politicians and ‘news’-persons who have assisted this with their lies. After doing this a certain number of times, the publics themselves increasingly share in their respective aristocracy’s and its ‘news’-media’s evil. The public’s role becomes then no longer mere negligence, but increasingly also complicity, in what their aristocracy (and its lying ‘news’-media) is doing to the world. All that the aristocracy have to do is to fool their respective public by means of their ‘news’-media — the media these aristocrats own and control, just as they own and control the government itself. And thus those lies produce the public’s complicity, by making the public the aristocracy’s mental slaves working to support that aristocracy’s foreign ventures, which slaughter and displace millions of people and destroy their countries, by faked ‘civil wars’ etc. Our governments are so ‘humanitarian’, spreading ‘democracy’ — lies.

On September 24th, the UK Government headlined “News Story: White Helmets resettlement”, and reported: “The UK will support White Helmets volunteers and their families, who were evacuated from Syria, under the government’s Vulnerable Persons Resettlement Scheme.” These jihadist mercenaries are now ‘vulnerable persons’, no longer merely ‘heroes’. The Government can even claim this, in public. They’re then implying that their public are total fools. Will British citizens actually believe that these Al Qaeda affiliates are suitable to become their fellow-citizens?

How much longer will the populations in the invading countries continue to tolerate their aristocratic masters? Have things not gotten to the point where it is clear what those masters are doing? How much longer will their hypocrisy continue to succeed? Al Qaeda jihadists are now being invited, as ‘heroes’, to become UK citizens. Is that not enough? More than enough? Way too much?

The problem isn’t those Al Qaeda affiliates. It is the UK Government that’s doing this traitorous action. The Deep State, the international aristocracy, runs not only the US but the UK and many other governments, just like the CIA secretly protected and brought to America leading Nazis after World War II. This is typical of the lying and psychopathy that’s done to serve billionaires. For example, Goldman Sachs’s Socially Responsible Investing Fund is actually invested in extremely anti-environmental exploitative mega-corporations, directly contradictory to the Fund’s promises to investors. The White Helmets is therefore just another example of such lying and psychopathy, more of The West’s make-pretend-kindly prettified nazism, cosmetifying an actually horrific monster.

NOTE: On September 25th, UK’s new anti-Tony-Blair (i.e., anti Deep-State) Labour Party voted to ban arms-sales to the US-UK-Saud ally Israel, because of Israel’s barbaric treatment of Palestinians; so, one cannot yet say that all political options short of an actual revolution have quite been exhausted. Though UK’s aristocracy hates this post-Blair Labour Party, that Party does have a chance to win power, but only if the public recognize that their own nation’s aristocracy itself is their nation’s enemy. In Israel, America’s Associated Press reported this Labour Party vote as if that vote were an anti-Semitic act, aimed against Jews, instead of an act of basic decency aimed against Israel’s Government. How much of a fool does one have to be to trust such ‘news’-media? The ‘news’-media might as well be owned directly by the weapons-makers as be owned by those firms’ owners who own also the ‘news’-media that control the voters. It’s the same Deep State that rules in many countries. It thrives on wars, on lies, and on oppression, both at home, and abroad. It needs to be replaced by democracy (not the current fake variety), in all countries it now rules.