Also released will be specific pages from the FBI’s FISA surveillance warrant application on former Trump campaign aide Carter Page, as well as interviews with Ohr. 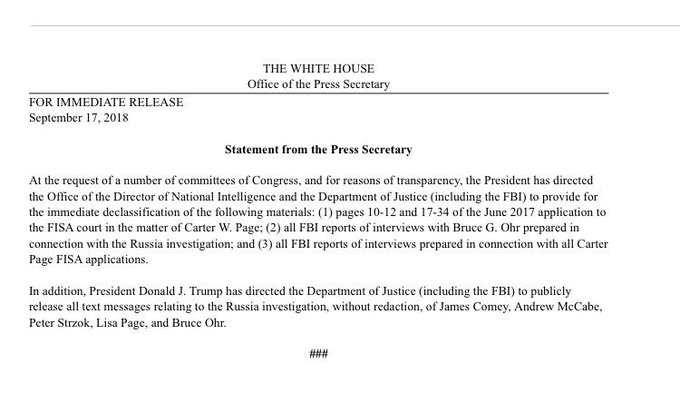 The statement reads in full:

“At the request of a number of committees of Congress, and for reasons of transparency, the President has directed the Office of the Director of National Intelligence and the Department of Justice (including the FBI) to provide for the immediate declassification of the following materials: (1) pages 10-12 and 17-34 of the June 2017 application to the FISA court in the matter of Carter W. Page; (2) all FBI reports of interviews with Bruce G. Ohr prepared in connection with the Russia investigation; and (3) all FBI reports of interviews prepared in connection with all Carter Page FISA applications.

In addition, President Donald J. Trump has directed the Department of Justice (including the FBI) to publicly release all text messages relating to the Russia investigation, without redaction, of James Comey, Andrew McCabe, Peter Strzok, Lisa Page, and Bruce Ohr“

As we reported last Monday, Trump had been expected to release the documents any time – with specific attention to the Page documents and the “investigative activities of Justice Department lawyer Bruce Ohr” – who was demoted twice for lying about his extensive relationship  with Christopher Steele – the former MI6 spy who assembled the sham “Steele Dossier” used by the FBI in a FISA surveillance application to spy on Page.

Republicans on the House Intelligence and Judiciary committees believe the declassification will permanently taint the Trump-Russia investigation by showing the investigation was illegitimate to begin with. Trump has been hammering the same theme for months.

Ohr, meanwhile, met with Russian billionaire Oleg Deripaska in 2015 to discuss helping the FBI with organized crime investigations, according to The Hill‘s John Solomon. The meeting with the Putin ally was facilitated by Steele.

Last month Trump called Ohr a disgrace, while also tweeting: “Will Bruce Ohr, whose family received big money for helping to create the phony, dirty and discredited Dossier, ever be fired from the Jeff Sessions  “Justice” Department? A total joke!”

Will Bruce Ohr, whose family received big money for helping to create the phony, dirty and discredited Dossier, ever be fired from the Jeff Sessions “Justice” Department? A total joke!

Trump’s threat came one day after two tweets about Ohr, noting a connection to former FBI agent Peter Strzok, as well as a text sent by Ohr after former FBI Director James Comey was fired in which Ohr says “afraid they will be exposed.”

“The FBI received documents from Bruce Ohr (of the Justice Department & whose wife Nelly worked for Fusion GPS).” Disgraced and fired FBI Agent Peter Strzok. This is too crazy to be believed! The Rigged Witch Hunt has zero credibility.

According to emails turned over to Congressional investigators in August, Christopher Steele was much closer to Bruce Ohr and his wife Nellie than previously disclosed.

Steele and the Ohrs would have breakfast together on July 30, 2016 at the Mayflower Hotel in downtown Washington D.C., days after Steele turned in installments of his infamous “dossier” on July 19 and 26. The breakfast also occurred one day before the FBI formally launched operation “Crossfire Hurricane,” the agency’s counterintelligence operation into the Trump campaign.

“Great to see you and Nellie this morning Bruce,” Steele wrote shortly following their breakfast meeting. “Let’s keep in touch on the substantive issues/s (sic). Glenn is happy to speak to you on this if it would help.”

“After two years of investigations and accusations from both sides of the aisle about what documents indicate, it is past time for documents to be declassified and let the American people decide for themselves if DoJ and FBI acted properly,” Freedom Caucus chairman Mark Meadows told Axios earlier Sunday.

In early August, journalist Paul Sperry tweeted that Trump may use his presidential authority to declassify “20 redacted pages of a June, 2017 FISA renewal, “and possibly” 63 pages of emails and notes between “Ohr & Steele,” and FD-302 summaries of 12 interviews.”

President Trump threatened to declassify documents two weeks ago – one day after the New York Times allegedly published an anonymous Op-Ed claiming to be from a White House official claiming to be part of an unelected “resistance” cabal within the Trump administration.

“The Deep State and the Left, and their vehicle, the Fake News Media, are going Crazy – & they don’t know what to do,” Trump tweeted earlier this month, adding: “The Economy is booming like never before, Jobs are at Historic Highs, soon TWO Supreme Court Justices & maybe Declassification to find Additional Corruption. Wow!”

The Deep State and the Left, and their vehicle, the Fake News Media, are going Crazy – & they don’t know what to do. The Economy is booming like never before, Jobs are at Historic Highs, soon TWO Supreme Court Justices & maybe Declassification to find Additional Corruption. Wow!

In June, Republicans on the House Intelligence Committee asked President Trump to declassify key sections of Carter Page’s FISA warrant application, according to a letter obtained by Fox News.

Carter Page, the DOJ/FBI’s person of interest, weighed in on the matter in late August, tweeting: “The Corrupt DOJ, co-conspirators in the DNC and their high-priced consultants correctly believed they had American democracy and the FISA Court over a barrel in 2016.”