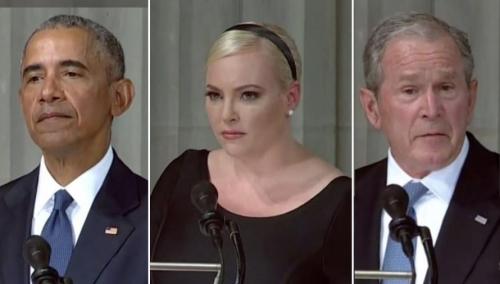 President Trump’s allies, both in Washington D.C. and across the country, are fuming after the funeral for the late Sen. John McCain turned into an anti-Trump rally.

Meghan McCain, along with former Presidents Obama and George W. Bush, used the somber event to take pot-shots at Trump – who was golfing during the ceremony while his daughter Ivanka sat through harsh criticism of her father – seated next to her husband, Jared Kushner.

McCain’s service was, on one level, a return to old Washington civility, with Republicans and Democrats, past presidents, friends and foes gathered in unity. But as its tributes echoed with overt criticism of the president, it only deepened the hostility between the city’s establishment and the outsider in the White House. –Politico

McCain was perhaps Trump’s most prominent nemesis in Washington D.C. – first withdrawing support for Trump during the 2016 election after the Access Hollywood “pussy tape” was leaked, and later hand delivering the infamous “Steele Dossier” to former FBI Director James Comey (who already had a copy). McCain would fly back to Washington D.C. in July of last year to a standing ovation on the Senate floor – only to cast the deciding vote against Trump’s repeal of Obamacare.

And after Meghan McCain said during her father’s eulogy that “The America of John McCain has no need to be made great again because America was always great,” and former Presidents Obama and Bush took similar veiled shots at the President – albeit without mentioning him by name, Trump’s allies across the country were left fuming.