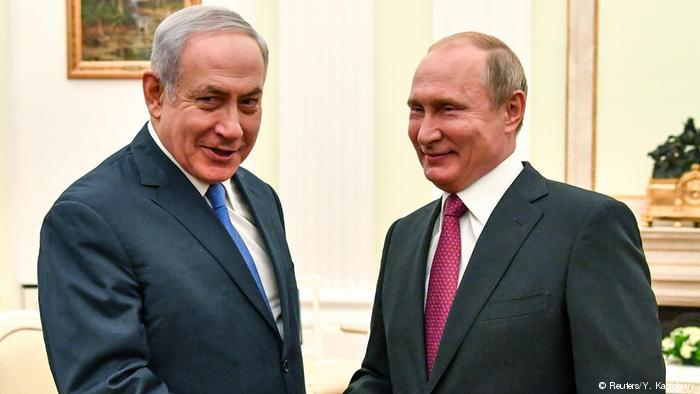 No matter how you look at the response by Russia to the illegal attack by Israel on Syria in which a Russian plane was shot down killing 15 soldiers, President Putin comes out looking extremely weak at best, and as an accomplice at worst.

That Putin would even stoop to the level of requesting a notification that an unlawful attack would be launched on Syria by the IDF is quite inconceivable.

What exactly does Netanyahu have on Putin that such a dubious arrangement would even be exposed?

Remember, the is the same Vladimir Putin who refers to the Neocon psychopaths in Washington as his partners.

He also refers to his ongoing partnership with Netanyahu’s Apartheid State of Israel.

Why would Putin ever want to maintain such partnerships in crime?

Really, the whole can of worms of various relationships is so convoluted and twisted you have to wonder about the Kremlin these days.  Have they gone crazy, too?  Or are they just crazy like a fox?

Maybe Putin knows something we don’t.  But when 15 Russian lives are so easily permitted to be snuffed out by the monsters in Tel Aviv, the Russian president will have many more people to answer to than just we armchair geopolitical analysts in the USA.  How about 145 million Russian?!

It’s true that Putin’s Russia represents the last and only bulwark against the New World Order globalist cabal who plan on taking over every single square inch of Planet Earth.

Then the same international crime syndicate will install a One World Government to oversee their global colony.

Are these the same partners that Putin often talks about?

Very few are aware but it was Putin who tragically failed to intervene in Syria years before the Russian military finally showed up in defense of the terrorized Syrian people.  Not only did Russia have a naval base at Tartus, Syria but they had other military installations their protect.  This begs the question as to why it took Russia so long to appear at the scene of the worst ongoing war crime of the Third Millennium.

As much good as Putin’s Russia has done for the Syrian people, it all could have been averted had the Kremlin had some spine.  Their gross negligence was responsible for the greatest mass exodus of war refugees and economic immigrants of the modern era.  Additionally, countless innocents have also been killed and brutalized by various terror groups just as whole cities have been ravaged and rural areas devastated.  All of this could have been prevented had Russia intervened militarily at the very start of the CIA-Mossad black operation to take over Syria that was approved by Obama-Clinton crime team.

The more time goes by, the more it appears that the Khazarian Mafia and their Zionist banksters are holding the Kremlin hostage as well.  Is there any nation on Earth that is truly free from the financial terrorism and economic sabotage wrought by these malevolent moneychangers?

Now it seems that not even Russia is acting in its best interest.  Why would Putin so casually make excuses for Israel’s blatant attack on Syria which took the lives of 15 Russians?  Something doesn’t add up.  If nothing else, Putin is sending an extremely bad message to the entire community of nations about Israel’s impunity.  His comments immediately after the recent attack were quite shocking regardless of his 5D chess moves.