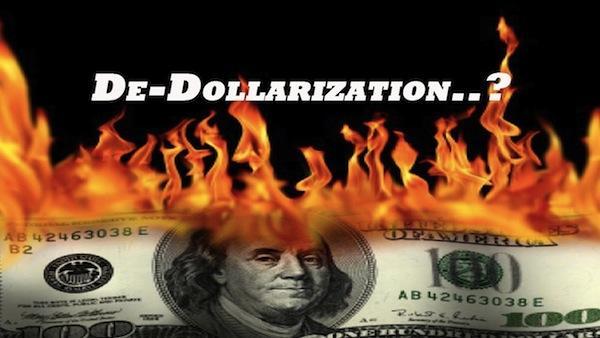 With the US unveiling a new set of sanctions against Russia on Friday, Moscow said it would definitely respond to Washington’s latest sanctions and, in particular, it is accelerating efforts to abandon the American currency in trade transactions,said Russia’s Deputy Foreign Minister Sergei Ryabkov.

“The time has come when we need to go from words to actions, and get rid of the dollar as a means of mutual settlements, and look for other alternatives,” he said in an interview with International Affairs magazine, quoted by RT.

“Thank God, this is happening, and we will speed up this work,” Ryabkov said, explaining the move would come in addition to other “retaliatory measures” as a response to a growing list of US sanctions.

Previously, Russian Energy Minister Aleksandr Novak said that a growing number of countries are interested in replacing the dollar as a medium in global oil trades and other transactions.

“There is a common understanding that we need to move towards the use of national currencies in our settlements. There is a need for this, as well as the wish of the parties,” Novak said.

According to the minister, it concerns both Turkey and Iran, with more countries likely to join the growing dedollarization wave.

“We are considering an option of payment in national currencies with them. This requires certain adjustments in the financial, economic, and banking sectors” to accomplish. Last week, we reported that the Kremlin was interested in trading with Ankara using the Russian ruble and the Turkish lira. India has also vowed to pay for Iranian oil in rupees.

Meanwhile, the world’s second-largest economy and Washington’s trade war nemesis, China, has been taking steps to challenge the greenback’s dominance with the launch of an oil futures contract backed by Chinese currency, the petro-yuan. China and Iran have already agreed to stop using the dollar in global trade as China has ramped up purchases of Iranian oil in defiance of US sanctions.