A UN report has said top military figures in Myanmar must be investigated for genocide in Rakhine state and crimes against humanity in other areas.

The report, based on hundreds of interviews, is the strongest condemnation from the UN so far of violence against Rohingya Muslims.

The army’s tactics are “consistently and grossly disproportionate to actual security threats”, it says.

It calls for the case to be referred to the International Criminal Court (ICC).

The government has consistently said its operations targeted militant or insurgent threats but the report says the crimes documented are “shocking for the level of denial, normalcy and impunity that is attached to them”.

The UN mission did not have access to Myanmar for its report but says it relied on such sources as eyewitness interviews, satellite imagery, photographs and videos.

The UK has called for perpetrators of crimes to be punished and Facebook removed pages associated with the Myanmar military in response to the accusations.

Genocide is the most serious charge that can be made against a government and is rarely proposed by UN investigators.

That this report finds sufficient evidence to warrant investigation and prosecution of the senior commanders in the Myanmar armed forces is a searing indictment which will be impossible for members of the international community to ignore.

However taking Myanmar to the ICC, as recommended by the report, is difficult. It is not a signatory to the Rome Statute that established the court, so a referral to the ICC would need the backing of the permanent five Security Council members – and China is unlikely to agree.

The report suggests, instead, the establishment of a special independent body by the UN, as happened with Syria, to conduct an investigation in support of war crimes and genocide prosecutions.

The government of Myanmar has until now rejected numerous investigations alleging massive atrocities by its military. This one will be much harder to dismiss.

What crimes does the UN allege?

The UN’s Independent International Fact-Finding Mission on Myanmar was set up in March 2017 to investigate widespread allegations of human rights abuses in Myanmar, particularly in Rakhine state.

It began its work before the military started a large-scale operation in Rakhine in August of last year, after deadly attacks by Rohingya militants.

The situation was a “catastrophe looming for decades”, the report argues, and the result of “severe, systemic and institutionalised oppression from birth to death”.

In Rakhine state, the report also found elements of extermination and deportation “similar in nature, gravity and scope to those that have allowed genocide intent to be established in other contexts”.

Who is blamed for the attacks?

The UN mission names army officials who, it says, bear the greatest responsibility. They include Commander-in-Chief Ming Aung Hlaing and his deputy. 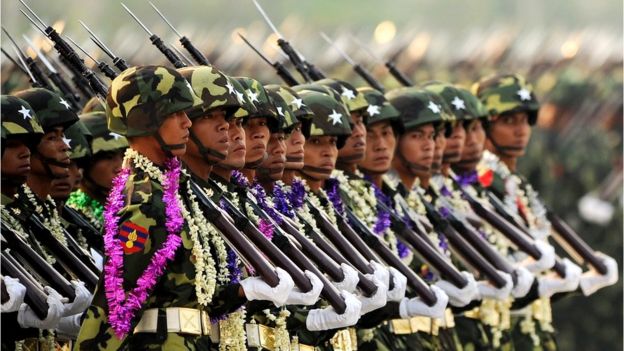 The military is described as being virtually above the law.

Aung Sang Suu Kyi, the report finds, “has not used her de facto position as Head of Government, nor her moral authority, to stem or prevent the unfolding events in Rakhine”. 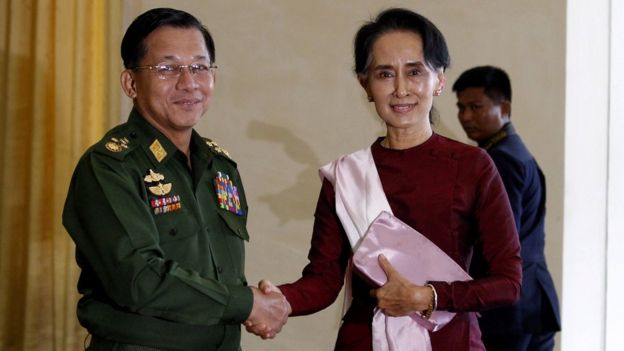 The report says that some abuses were also committed by armed ethnic groups in Kachin and Shan state, and by the Arakan Rohingya Salvation Army (Arsa) in Rakhine.

The mission said it would release a more detailed report on 18 September.

How did the situation reach crisis point?

The Rohingya are one of many ethnic minorities in Myanmar and make up the largest percentage of the country’s Muslims. The government, however, sees them as illegal immigrants from neighbouring Bangladesh and denies them citizenship.

According to the medical charity MSF, at least 6,700 Rohingya, including at least 730 children under the age of five, were killed in the first month after the violence broke out.

The army exonerated itself in an investigation in 2017.

Rights groups like Amnesty International have long called for top officials to be tried for crimes against humanity over the Rohingya crisis.

How is the world responding to the report?

The UK Foreign Office said the “appalling” violations against the Rohingya must be punished.

“There cannot and must not be impunity for such acts,” said Minister of State for Asia Mark Field.

"There cannot and must not be impunity for such acts."

Minister of State for Asia @MarkFieldUK comments on the UN's Fact Finding report on Burma.https://t.co/ug5IxJSfmK pic.twitter.com/C3bqiLklRK

“We have made clear very consistently those responsible for alleged serious and systemic human rights violations must be held to account,” she said.

“We continue to work to prevent the misuse of Facebook in Myanmar…” it said.

“This is a huge responsibility given so many people there rely on Facebook for information – more so than in almost any other country given the nascent state of the news media and the recent rapid adoption of mobile phones.”